What were you destined to do in life? Were you meant to play a starring role? Or were you supposed to be a supporting player? Or maybe even just a spectator? No matter which part you embrace, they all serve a purpose, as evidenced by the philanthropic efforts of a generous benefactor depicted in the entertaining new documentary, “Peggy Guggenheim: Art Addict.”

What does the heiress to a vast fortune do with her time and financial resources if she’s in a male-dominated world and not necessarily expected to accomplish much? What’s more, how does someone like that fit in when she possesses a headstrong, eccentric personality, one that could easily ruffle the staid feathers of a society with little imagination or tolerance for unconventional thinking? If you’re Peggy Guggenheim (1898-1979), you chart your own path – and become quite a trailblazer in the process.

The indomitable Ms. Guggenheim was born into a family that made its fortune in mining. As the daughter of a wealthy industrialist, she lived a life of privilege, with few expectations placed upon her. In light of that, one might expect such status would confer upon her a life of luxury, happiness and contentment, yet her upbringing was not the easiest. She lost her father, Benjamin, with the sinking of the Titanic. She was also haunted by the exploits of a sister plagued with mental health issues. But Peggy clearly had ambitions that needed to be satisfied somehow. So, given these circumstances, what was she to do to find happiness and her place in the world? 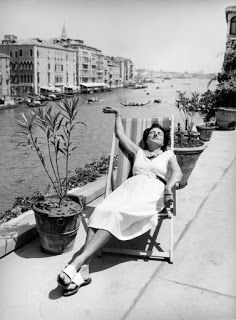 Early on in life, while working in a bookstore in her native New York, Peggy developed a strong, abiding interest in bohemian culture. This eventually prompted her to relocate to Paris in the 1920s, where she became fully ensconced in the city’s cutting-edge art world. She developed a fascination with modern art and became friends with talents like Constantin Brâncuși and Marcel Duchamp. Her interest in such works led her to open a modern art gallery in London in 1938 featuring art by the likes of Jean Cocteau, Jean Arp, Pablo Picasso, Max Ernst, Alexander Calder, Yves Tanguy and Vasily Kandinsky, as well as her friends Brâncuși and Duchamp. But, despite the gallery’s critical acclaim, it proved to be a financial loss, which prompted Peggy to pursue a new course.

Peggy decided to return to Paris with plans to open a new gallery. Given the proliferation of the modern art scene there, she actively sought to acquire as many works as possible, including numerous pieces by Salvador Dalí and Joan Miró, as well as additional paintings by Picasso and Ernst. But, with World War II ravaging Europe and a German invasion of Paris looming, she fled the City of Lights for the safety of New York. And, despite the challenges associated with making a hasty exit, she managed to take all of her artwork with her for fear that it would be confiscated or destroyed by the Nazis. She also managed to save the life of painter Ernst – by marrying him and taking him to America with her. 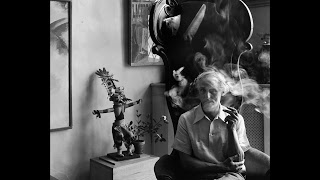 Once in New York, she opened an innovative new museum known as The Art of This Century Gallery, which featured cubist, surrealist, abstract and kinetic works. The gallery’s exhibitions were truly avant-garde in many respects, incorporating innovative sound and lighting to accompany the pieces on display. During this time, she also helped significantly further the careers of other emerging artists, such as Jackson Pollock and Willem de Kooning.

Despite her tireless commitment to her vocation, Peggy was not all work and no play. She had a passion for men nearly equal to her lust for art. In addition to her marriage to Ernst, she had affairs with numerous other suitors, including a fling with Irish writer Samuel Beckett and a tryst with Pollock (an incident depicted in the 2000 biopic “Pollock” featuring Amy Madigan as Guggenheim). She was unabashed about her sexual appetite and didn’t care what others thought about it.

With the end of World War II, Guggenheim divorced Ernst and closed her gallery. While New York provided sanctuary during the conflict, she had no interest in staying there for the long term. So, with the cessation of hostilities, she relocated back to Europe, this time settling in Venice, where she was invited to display her collection. The enthusiastic reception she received in Italy led her to settle there permanently, with her artwork being shared between her Venice venue and the iconic Solomon R. Guggenheim Museum in New York, a gallery specializing in modern art named for Peggy’s uncle.

Not long before Peggy’s death in 1979, she sat down for a series of recorded interviews with her biographer, Jacqueline B. Weld, who authored the book, Peggy: The Wayward Guggenheim. The tapes of those conversations went missing for years and were believed irretrievably lost. But, when the recordings miraculously resurfaced, their discovery inspired director Lisa Immordino Vreeland to make this documentary. 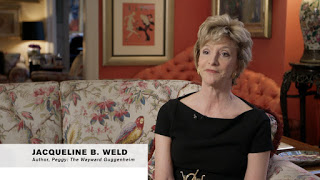 The film features select excerpts from those tapes, accompanied by an array of archive photos and movie footage featuring the protagonist and many of her associates, as well as numerous examples of the works from Guggenheim’s collection. This material is further enhanced by recent interviews with Weld and with a variety of experts from the art world, featuring their observations and insights about Guggenheim’s life, career, adventures and sensibilities. The result is an engaging, often-hilarious account of a life well lived by a colorful, charismatic character who contributed much to the lives of many and the world at large.

When considering our purpose in life, many of us naturally gravitate to our own particular accomplishments. What have we created, and what impact has it had? In doing so, however, we often tend to evaluate the achievements we manifest directly and not necessarily those that we help to bring about from working behind the scenes, those indirect efforts in which we facilitate the realization of others’ dreams. We frequently downplay our role in these endeavors, unaware that our contributions in those regards are just as valuable as anything that bears the direct imprint of our own hand. Such materializations, like everything else in our reality, are all part of the greater whole of our existence, the world we bring into being through the conscious creation process, the means by which we manifest what we experience through our thoughts, beliefs and intents. 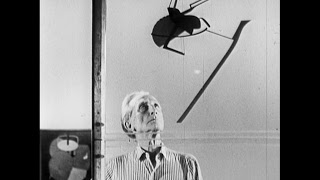 Artist Marcel Duchamp was one of many talents who benefitted from the generous support and encouragement of modern art benefactor Peggy Guggenheim, as detailed in the new documentary, “Peggy Guggenheim: Art Addict.” Photo courtesy of Submarine Deluxe.

Through her determined efforts, Guggenheim made active use of conscious creation in a variety of ways. She believed fervently in her mission and brought it into being in countless ways. For instance, as a patron of the arts, she significantly helped further the careers of numerous little-known talents. In addition to those named above, she helped promote the works of other artists, including Joseph Cornell, Alberto Giacometti, Fernand Léger, Piet Mondrian, Robert Motherwell and Mark Rothko. What’s more, through several of her gallery exhibitions, she helped put forward the works of underserved segments of the art world, most notably women and children, creatives who frequently had difficulty getting attention in a largely male-dominated community.

By bringing attention to these artists and exposing the world to works that might not have otherwise received much recognition, Guggenheim zealously engaged in the conscious creation practice known as value fulfillment, the means by which we employ the process to benefit both ourselves and the wider world of which we’re a part. Her accomplishments in this vein were apparent in other ways, too, such as her efforts to keep numerous pieces of art from falling into the hands of the Germans during World War II. But, perhaps most importantly, she played an integral role in making modern art a legitimate, respectable genre in the mainstream arts community and society at large, constituencies long entrenched in, and limited to, more traditional modalities. Achievements like this are prime examples of value fulfillment in full flower.

Of course, Peggy would not have been able to achieve these accomplishments were it not for the participation of her collaborators. Thanks to those joint efforts, she became an essential player in acts of co-creation, the aims of which are the realization of mutually manifested mass events. In this instance, even though she was not an artist herself, she was just as much a part of the modern art movement as those who produced the works that typified it.

Thanks to her passionate efforts, Peggy pushed the limits of what was considered artistically acceptable, an outcome reflective of another cornerstone conscious creation principle. As practitioners of this philosophy are well aware, one of its chief aims is to explore the infinite range of possibilities available to us in our manifestation efforts, and Guggenheim pursued this notion fearlessly and with gusto. She believed, as most conscious creators know, that we’re all in a constant state of becoming. This is most apparent in her efforts to help introduce the world to works and styles of art not previously seen. And, as evidenced by her inventive exhibition stagings, she showed us new ways to look at art as well. 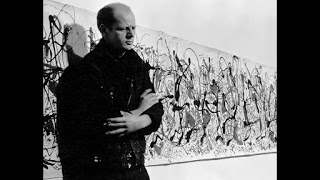 Abstract painter Jackson Pollock, more commonly known as “Jack the Dripper,” made a name for himself and his work with the aid of art benefactor Peggy Guggenheim, as detailed in the new documentary, “Peggy Guggenheim: Art Addict.” Photo courtesy of Submarine Deluxe.

The world owes much to this eccentric art addict. She gave us much that was new and unique. She exposed us to paintings and sculpture that experimented with form and content. And she relished her enjoyment of it all, a feeling that ultimately translated into her many accomplishments. (Not bad for someone from whom little was initially expected.)

“Peggy Guggenheim: Art Addict” is an insightful, informative and highly entertaining profile of an unconventional doyenne of the art world. The film’s meticulously organized format, coupled with its incisive wit, carefully selected archive footage and vast array of examples from the protagonist’s artwork collection, make Guggenheim come to life as a readily identifiable, fleshed-out persona. It’s a fun offering in a film genre often beset by overly serious, stodgy releases. The film is playing in limited release in theaters and at film festivals and will be available on iTunes and DVD in the near future. 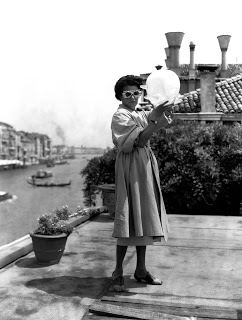 Living out her days in the comfort of Venice, art patron Peggy Guggenheim built an impressive collection that has become one of the city’s most visited tourist attractions, as described in the new documentary, “Peggy Guggenheim: Art Addict.” Photo courtesy of Submarine Deluxe.

Although it may not be readily obvious, we’re each artists in our own way in that we all engage in creative acts that result in the production of identifiable manifested outcomes. We need not be painters or sculptors or photographers per se to be considered artists; our respective canvases take many forms, including those that aren’t traditional or plainly apparent. In that regard, Peggy Guggenheim worked her magic in a unique milieu all her own, and the results were indeed impressive. Her inspiration thus serves as a shining light to all of us in the exploration and fulfillment of our own individual destinies.