‘Everything Is Copy’ honors an artistic visionary

Moviegoers are truly blessed when they’re able to screen the films of an incredible talent. They’re especially fortunate when that talent is prolific, producing many worthwhile creations in many different milieus. It’s regrettable, though, when the creator of those works doesn’t always receive the recognition that’s genuinely deserved. So it was to some degree with writer-director-playwright Nora Ephron (1941-2012), who produced an impressive repertoire over the course of her career. Thankfully, Ephron finally receives the kudos she so rightfully earned, as depicted in the new made-for-cable TV documentary, “Everything Is Copy.”

As the eldest daughter of Hollywood screenwriters, Ephron grew up in the shadow of the movie business, though she did not immediately follow her parents’ path. She initially worked as a reporter and columnist at The New York Post and then as an essayist for Esquire magazine, positions that earned her considerable acclaim. It also helped garner screenwriting opportunities, such as the script for the 1983 Mike Nichols biopic “Silkwood,” for which she earned an Oscar nomination.

Consequently, Ephron forged an impressive network of friends and contacts, including writers, actors and fellow journalists, such as Washington Post Watergate investigator Carl Bernstein, whom she eventually married. That marriage ended in divorce, however, when Ephron learned of Bernstein’s infidelity, an event that prompted her to write the autobiographical novel Heartburn (1983), which would later be made into another Mike Nichols film (1986) for which she wrote the screenplay.

With her successes on “Silkwood” and “Heartburn,” Ephron’s film career was off and running. She would go on to write and/or direct a number of other pictures, including “This is My Life” (1992), “You’ve Got Mail” (1998) and “Julie and Julia” (2009), as well as “When Harry Met Sally” (1989) and “Sleepless in Seattle” (1993), both of which earned her additional Oscar screenwriting nominations.

In addition to her movie work, Ephron would pen the script for the Broadway play Lucky Guy (2013), an elegy about the career of New York Post colleague Mike McAlary, who won a Pulitzer Prize but died of cancer not long after receiving the award at the age of 41. The play, somewhat uncharacteristic of Ephron’s other works, would not premiere until a year after her own death, also from cancer, something that many of her closest friends and peers speculated had prompted her to write the script in the first place. 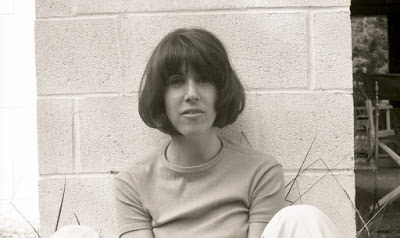 The life and career of writer-director Nora Ephron provides the focus of the new made-for-cable TV tribute documentary, “Everything Is Copy.” Photo by Dan Greenburg, courtesy of HBO.

Considering Ephron’s body of work, it’s easy to see where she drew her inspiration from – her own life. But, then, that shouldn’t come as a surprise, given that her parents taught her early on that our lives are often our best sources of inspiration for our creative works, a notion they embodied in the expression “everything is copy” (hence this documentary’s somewhat enigmatic title). In this way, her creations became mirrors of her life, just as our lives are mirrors of our beliefs, thoughts and intents, the building blocks of the conscious creation process, the means by which we manifest the reality we experience.

Whether or not Ephron was a conscious practitioner of this philosophy, she nevertheless was an expert at it, materializing the “copy” necessary for creating her impressive body of work. That repertoire is noteworthy for a number of reasons, perhaps the most important of which being her incisive insights into the human condition, especially in the areas of personal relationships and vocational callings. As both an active participant and objective observer of these pursuits, she was subsequently able to translate her experiences and observations into finished works that encapsulated these ideas in engaging, heartfelt chronicles. Her ability to envision such results thus made her works truly inspired manifestations, creations that both addressed the subjects at hand and embodied the metaphysical principles that made them and their corresponding artistic counterparts possible.

Two elements played key roles in Ephron’s creative process – her keen intuitive skills to see the underlying truth of what was going on and her sense of integrity for being faithful to capturing and translating its essence into finished works. These qualities are true hallmarks of a proficient conscious creator, one who’s willing to examine what lies at the heart of a particular situation and who has the courage and nobility to portray it with fidelity. Ephron was a pinnacle of both.

In many ways, Ephron’s life serves as an inspiring example to us all, both in terms of reflecting what conscious creation makes possible and the personal attributes that make the process work. While we may not all be aspiring writers and directors, the principles Ephron employed in her approach to her work illustrate concepts that we all can use in the creation of whatever ventures we pursue for ourselves, be it cooking or child rearing or even basket weaving. The creative process is essentially the same, no matter what canvas we work on, and, for her part, Ephron was a true artist in all the efforts she undertook.

Through Ephron’s writings and films, we learn much about what it means to be alive in the ever-shifting ways of our times. Simultaneously, her works also enliven the universal truths of the human condition, especially in areas like relationships, family, vocation and our place in the world. This visionary gave us many gifts through her art, and, for that, we should be forever grateful.

“Everything Is Copy” is a fun and lively tribute to Ephron, lovingly compiled by her son, Jacob Bernstein. The film delivers consistently from start to finish, effectively chronicling her colorful and storied career. It features interview segments with Ephron through the years, as well as the observations of those who knew and worked with her, including Tom Hanks, Meg Ryan, Meryl Streep, Mike Nichols, Steven Spielberg, Barbara Walters, Liz Smith, Gay Talese, Barry Diller, Rob Reiner, Rosie O’Donnell, Bob Balaban, Carl Bernstein and Nora’s three sisters, Delia, Amy and Hallie. In addition, the film features clips from many of the movies that Ephron worked on as screenwriter and/or director, as well as narrated excerpts from many of her essays read by the likes of Reese Witherspoon, Rita Wilson, Lena Dunham and Gaby Hoffman. It’s essential viewing for her fans and an informative portrait for those unfamiliar with her work. The film is currently airing on the HBO cable network, including its On-Demand video service.

Artistry is something not reserved just for artists; it’s something we’re all capable of expressing. But it helps to have inspiration to show us the way, and those who excel at this often provide us with the enlightenment and encouragement we need to make our own masterpieces. We can thank Nora Ephron for setting such an example – and can best pay tribute to her by doing our best to emulate what she so successfully achieved.