Skip to content
Home/Archives/‘Marguerite’ wrestles with passion, truth and denial

It would be great if we could all realize our most cherished dreams, wouldn’t it? In many ways that’s entirely possible. But, in others, it can be a pipe dream, a frustrating exercise in wishful thinking – unless, of course, we figure out how to miraculously beat the odds. Those determined souls don’t know the meaning of failure or unrealistic expectations, as seen in the quirky new French comedy, “Marguerite.”

Marguerite Dumont (Catherine Frot) adores the opera and longs to serenade audiences with her singular vocal renditions. There’s just one catch – she can’t hit a right note to save her life. But that doesn’t deter the wealthy baroness, especially since she’s convinced she’s a virtuoso just waiting to be discovered, one performance away from gracing world stages with what she sees as her stellar intonations. That notion gets fueled by the polite applause of others, most notably the members of her aristocratic music club, which she freely supports with her generous patronage. 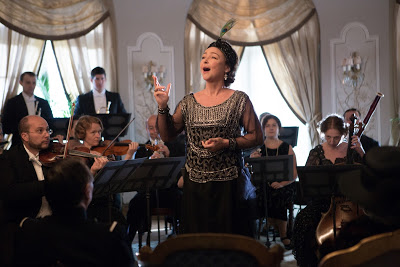 Wealthy baroness Marguerite Dumont (Catherine Frot, center) aspires to become an opera singer, something that might happen if she could ever hit one right note, as seen in the quirky new French comedy, “Marguerite.” Photo courtesy of Cohen Media Group.

In many ways, though, Marguerite is quietly seen as a joke, something that everyone knows but is reluctant to acknowledge in polite 1920s Parisian society. That’s especially true for her husband, Georges (André Marcon), who looks upon her as an embarrassment. He endlessly concocts contrivances to avoid her performances, particularly when he’s afraid she’ll put a damper on the high-profile business deals he’s trying to arrange (transactions, by the way, that frequently require her financial input to succeed). In distancing himself from her, he has also become a somewhat shameless philanderer, engaging in an affair with one of Marguerite’s best friends, Françoise (Astrid Whettnall).

Still, despite these circumstances, Marguerite’s profile somehow manages to rise, thanks in large part to the disingenuous praise of a young journalist (Sylvain Dieuaide) and his wily anarchist companion (Aubert Fenoy). She also has the undying support of her loyal butler, Madelbos (Denis Mponga), who looks after her every need, shielding her from criticism and even securing the assistance of a dubious vocal coach, Atos Pezzini (Michel Fau). Before long, the would-be diva seems to be on the verge of a professional breakthrough. But will it really happen? Or will someone step in with a reality check? And what will that mean for Marguerite and those who claim to have her (i.e., their own) best interests at heart? 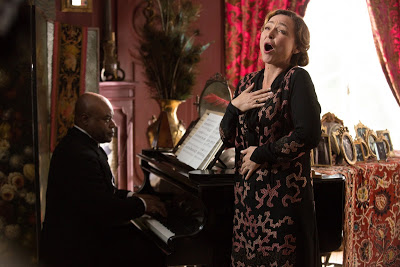 So, one might ask, how can somebody like Marguerite realistically allow herself to engage in such inexplicably delusional behavior? Is she so blind to her circumstances that she can’t see what’s happening or what others think about her? The short answer is, apparently not. But how can this be?

For those with a passion, there’s little stopping them in the pursuit of making their dream come true. They’re committed to creation for its own sake, regardless of whatever obstacles or derogatory comments may come their way. Such unrepentant souls are masters at practicing the art of conscious creation, the means by which we manifest the reality we experience through our thoughts, beliefs and intents.

Marguerite clearly has her bases covered in this regard. She’s figured out how to formulate the right beliefs and how to manifest the right combination of conditions and support mechanisms to realize her ambitions. To her, what matters most is living out what she wants, regardless of what others might think – and no matter how oblivious she herself might be to what she has actually created. She knows how to relish the joys and power of creation.

On a closer look, though, Marguerite’s manifestations serve other, less apparent purposes as well. Her preoccupation with music helps to protect her from the many unpleasantries in her life. By devoting herself to her “career,” she manages to tune out the anguish her French homeland suffered during the recent World War, as well as her husband’s cheating and the parasitic, opportunistic behavior of the many who leech off her generosity. Having such a shield can indeed prove a valuable and palatable diversion in the face of potentially devastating circumstances. 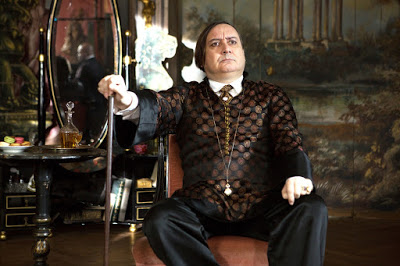 When a tone-deaf would-be opera singer seeks to develop her talents, she turns to a dubious vocal coach (Michel Fau) to help her in director Xavier Giannoli’s new comedy, “Marguerite.” Photo courtesy of Cohen Media Group.

Of course, if conscious creation is truly responsible for everything we materialize, then one could readily argue that Marguerite manifested these disagreeable circumstances, too. Which naturally begs the question, why? As conscious creators are well aware, the philosophy makes all experiences possible, including those most of us would consider undesirable. But, even knowing that, why would anyone create such seemingly unwanted conditions?

In the evolution of our being, we ultimately seek to experience the full range of what life has to offer, for better or worse. This includes both active participation in these scenarios, as well as deliberate avoidance of their impact, something that Marguerite has obviously chosen to experience here. Some might see her choices as painful, regrettable or unrealistic, but, in their own way, they’re just one of the many life lessons we all seek to experience at some point in our soul’s journey.

In the long run, though, the truth is what we all ultimately hope to discover and embrace, including Marguerite. Throughout her unusual odyssey, nothing seems to get her down, no matter how potentially disheartening, except for her husband’s absence from her performances. She initially shrugs off his flimsy excuses, but, as time passes, her suspicions are quietly raised, providing her with glimpses of what’s really going on. This is due to subtle shifts in her beliefs, which produce different outlooks and outcomes from what she has been experiencing all along, leading to a new awareness about the nature of her reality, a dissolution of the aforementioned denial and yet another life lesson learned. To be sure, this may not be the easiest way to go about all this, nor might it be the way many of us would choose to pursue it. But, if that’s the path that Marguerite believes would be the most effective way for her to get the lessons and experiences she needs, then who are we to criticize her for employing the conscious creation process in this manner? In the end, we’re all free to pursue this practice in any way we so choose, Marguerite included.

In her own way, Marguerite is a truly empowered woman, even if we don’t share her goals or her means for reaching them. But, then, that’s what the spirit of a truly inspired conscious creator is all about, and her commitment to her own unique path provides us with an example we can emulate. 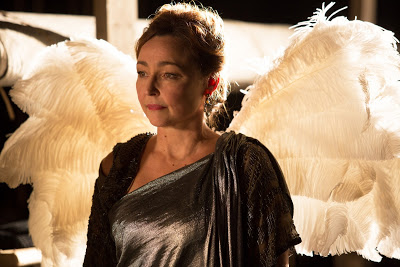 This entertaining though slightly overlong comedy, loosely based on the life of an aspiring opera singer with comparable vocal gifts, features fine performances by its ensemble cast, whose colorful characters are not unlike those one might find in a Fellini film. The protagonist’s positively dreadful renditions of classic operatic works are amusing but never become tiresome, especially when she comes up with ever-new and creative ways of mangling these revered vocal standards. Its meticulous period piece production values make for an impeccable visual feast, too. However, the picture’s tendency to get bogged down in the middle drags out the story a bit needlessly, delaying a surprising and heartfelt payoff. Nevertheless, director Xavier Giannoli has assembled a distinctive cinematic experience, one well worth the time. “Marguerite” is currently playing in limited release in theaters specializing in foreign and independent film.

Chasing our dreams can be one of the most meaningful and fulfilling pursuits in which we’ll ever engage. But, as “Marguerite” shows, let’s just make sure they’re the right ones.