As all successful writers know, their works seldom reach their destined greatness without the diligent efforts of their editors, those behind-the-scenes professionals who shape these titles into polished finished products. However, editors often toil in anonymity, their contributions rarely, if ever, receiving the recognition and credit they deserve. Nevertheless, such creative collaborations are essential for truly inspired results, a process detailed in the new biopic, “Genius.”

The film chronicles the career of Maxwell Perkins (Colin Firth), noted literary editor at Charles Scribner’s Sons, who brought to market the works of such authors as Ernest Hemingway (Dominic West) and F. Scott Fitzgerald (Guy Pearce) during the 1920s and ʼ30s. However, the picture primarily follows his frequently frenzied working relationship with his most gifted (and most high-maintenance) protégé, Thomas Wolfe (Jude Law), whose unconventional writing – and equally eccentric life – made him an American original, as well as a best seller.

As inspired as Wolfe’s work was, though, this prolific scribe needed an editor to rein him in, and that’s where Perkins came in, helping the author transform and package his raw material into books that the public devoured, such as Look Homeward, Angel and Of Time and the River. The film illustrates how they worked together to achieve this result, a process that often had wider ramifications, spilling over from their literary lives into their everyday existence. Perkins taught the unruly Wolfe discipline, while Wolfe showed his button-down mentor how to let loose and live.

This collaboration yielded truly outstanding outcomes, but it also came at a cost, most notably in the protagonists’ sometimes-stormy relationships with their significant others (Nicole Kidman, Laura Linney) and, eventually, with one another. Perkins and Wolfe thus struggled to learn what it means to strike a proper balance, both in one’s work and personal lives and how the two relate to one another.

As any artist knows, to achieve success, the creative process calls upon us to tap into our inspiration, and, when we do so, we frequently experience feelings of exuberance, if not euphoria. But accessing this vast pool of raw material can also be overwhelming. In our desire to bring this information into being, we may feel compelled to do so all at once, in totality, for everyone, a practice that can easily overpower others and cause the output to become cryptic or muddled.

This is where the role of the collaborator comes into play, whether it’s for a writing project or any other art form, no matter how sophisticated or mundane. Having a colleague who can fill the “editor” role can help us mold our creativity in a way that makes it readily comprehensible to others. And, by doing so, we’re thus able to engage in the practice of co-creation, a jointly expressed form of the conscious creation process, the means by which we manifest the reality we experience through the power of our thoughts, beliefs and intents.

The work of Perkins and Wolfe clearly embodies this notion. Wolfe, who had absolutely no trouble accessing his muse, frequently produced reams of material when composing his manuscripts. The rough draft of Of Time and the River, for example, was 5,000 pages alone. Perkins, meanwhile, understood that he could not bring a book of that length to the market if Scribner’s and the author expected to sell any copies. He thus needed to work with Wolfe to pare down the book to create a product that would appeal to reading audiences – and that would make money for his employer.

For such a collaboration to work, both parties had to trust one another – and to believe in the dependability of that trust. If either of them allowed fear, doubt or mistrust to creep into the mix, all bets would be off. However, by forming beliefs where they placed faith in one another, where each knew that they were working for their mutual benefit, Perkins and Wolfe were able to succeed in their co-creative alliance, with results that spoke for themselves. 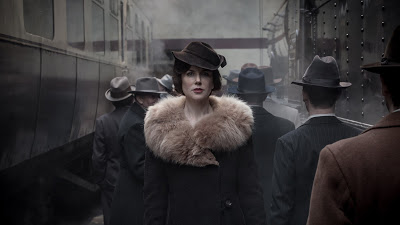 Of course, to attain such a result, Perkins and Wolfe needed to make sure they knew how to form suitable beliefs in the first place. Thankfully, through their thoughts and deeds, they apparently knew how to do this. And, when they didn’t, they knew enough to form suitable beliefs where they could place their faith in the abilities of their fellow collaborator or where they could learn from the experience for themselves.

As any conscious creator knows, our beliefs form from the input provided by our intellect and intuition. Ideally, this process functions best when we balance the two influences. However, many of us tend to give more credence to one than to the other (generally favoring the intellect), which can unduly affect the resulting beliefs. And, in many ways, this was the case with these two collaborators.

In many respects, the principals each embody the influences that go into belief formation. Wolfe, with his unfettered ability to tap into his creative wellspring, symbolizes the intuition, an influence driven by feelings, impressions and gut instincts. Perkins, by contrast, with his no-nonsense approach to making copy palatable and marketable, represents the intellect, an attribute governed by logic, reason and rationale. But, to come up with workable beliefs to make their publishing projects succeed, Wolfe and Perkins need to be able to draw upon both influences. And, if either of them is unable to make either part of this puzzle work on their own, then they need to find a way to fill in the gap, something that they can achieve through their beliefs in the abilities of one another. Such “stopgap beliefs” may not be direct reflections of the goals being sought, but they get the desired results nevertheless, which, in the end, is just as important when it comes to seeing an objective fulfilled.

Anyone who wants to become more proficient at striking the right balance between these influences, avoiding the need for resorting to stopgap beliefs, should look to develop the skill of discernment. This may not be easy, especially if we tend to default in our reliance on either our intellect or intuition. But, if we can overcome that predisposition, tempering our intuitive impulses with our intellect (and vice versa when needed), we come closer to reaching a healthy equilibrium with these influences.

Perkins and Wolfe strive toward this, even though neither is especially practiced at it. Wolfe’s freewheeling lifestyle shows Perkins how he can more readily tap into his impulsive, intuitive side. At the same time, Perkins’s sense of logic and personal discipline sets an example for his protégé to follow for embracing a more intellectual outlook. Neither may be particularly proficient at their respective lessons, but these opportunities give them a place to start, part of their metaphysical learning curve.

Anyone seeking to launch a creative undertaking can learn a lot from the experience of these two collaborators. As noted previously, the example they set needn’t be limited to writing projects, either. The principles are just as applicable to recording an album or arranging a kids’ birthday party, materializing outcomes that everyone to enjoy based on the creative input of everyone involved in their planning. 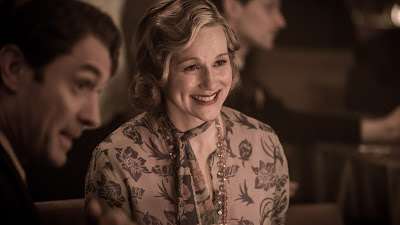 Louise Perkins (Laura Linney), wife of literary editor Maxwell Perkins, urges her husband to strike a balance between his work and home life in the new biopic, “Genius.” Photo by Marc Brenner, courtesy of Roadside Attractions.

Based on the book Max Perkins: Editor of Genius by A. Scott Berg, “Genius” may not sound like compelling filmmaking, but it will definitely resonate with anyone who has been involved in a collaborative effort, a form of intimacy the inexperienced may not be able to fully appreciate. The picture features many fine attributes (most notably its acting, cinematography and period piece production values), although its script doesn’t always feel fully fleshed out, despite moments of brilliance and obviously good intentions. Still the film’s examinations of the creative process, the art of cooperation and the passion to express oneself are commendable and worth viewing, even if not couched within the most ideal vehicle.

Having been an editor myself, I can relate to the underappreciated contributions of these professionals. It’s highly unusual to see their work recognized in such a high-profile way – and high time that it is. In the end, taking our work to the next level means being willing to let others (like editors) help us reach that goal. “Genius” helps to show us how – and the rewards we can reap by doing so.