‘Miss Peregrine’ validates the ‘peculiar’ found in each of us

In an age where many of us feel like we’re being coerced into various forms of social homogenization, it can be difficult for those who are “different” – perhaps even downright unconventional – just to get by. The pressure to conform can be unbearable, maybe even perilous, especially when confronted with the intolerance of the powers that be. Thankfully, though, there are those who are not afraid to stand up for themselves – or who are willing to protect those who are unable to do so – to keep dastardly influences at bay. That’s the drama that plays out in the delightful new Tim Burton fable, “Miss Peregrine’s Home for Peculiar Children.”

Based on the book of the same name, this colorful adventure’s plot is too involved to detail here, but the picture essentially involves the exploits of Jake Portman (Asa Butterfield), a somewhat geeky teenager who’s thrust into investigating the murder of the doting grandfather (Terence Stamp) he so dearly adores. His inquiry quickly leads him into a supernatural adventure involving time travel, protected temporal sanctuaries, and a host of unusual characters, including a home full of specially gifted youngsters (Ella Purnell, Finlay MacMillan, Lauren McCrostie, Hayden Keeler-Stone, Georgia Pemberton, Milo Parker, Raffielle Chapman, Pixie Davies), their loving protector, Miss Alma Peregrine (Eva Green), and a cabal of evildoers (Helen Day, Philip Philman, Jack Brady, Scott Handy) seeking to undermine the children’s efforts to be themselves, led by their nefarious mastermind, Mr. Barron (Samuel L. Jackson). The result is a rollicking, sometimes-frightening, sometimes-wondrous, sometimes-hilarious jaunt across time and alternate dimensions. 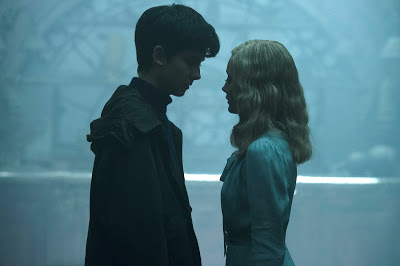 Much of the narrative in “Miss Peregrine” deals with our willingness to keep limitations from holding us back. That’s particularly true for the children in this story, who possess remarkable powers, such as the ability to control the air (Purnell), the ability to project dreams as visual images (Keeler-Stone) and superhuman strength (Davies). Their protector, Miss Peregrine, has comparable talents of her own, like the ability to shape-shift, transforming herself into a bird (hence her name) at will. These talents are far from mainstream capabilities, abilities that easily might intimidate those who don’t possess them. The kids and Miss Peregrine recognize this, too, freely referring to themselves as “peculiars.” But they also don’t let these unconventional skills inhibit them from being themselves. They’re unafraid to make use of their faculties when warranted.

So how have the peculiars come to have these abilities? It’s because they believe they possess them, and those beliefs, in turn, shape the reality they experience. This principle is the cornerstone of conscious creation philosophy, the means by which we materialize the existence we experience through the power of our thoughts, beliefs and intents. And, based on the powers that the children and their protector wield, it’s apparent they’re quite proficient at it, too.

The beliefs that are most important here are those having to do with pushing boundaries and exceeding the kinds of limitations that tend to hold most of us back. When we open ourselves up to new possibilities through the power of our thoughts, unimaginable new vistas open up. The peculiars set a valuable example in this regard, and the one who benefits most from that in this story is Jake. His involvement with his newfound friends exposes him to possibilities he hadn’t considered before, a notion that will serve him well as he becomes aware of previously unknown abilities of his own.

Those who possess talents like this, however, often come under attack from others who would either seek to steal their powers or thwart them from exercising them. Challenges like this are often difficult to handle, but they also push us to affirm our beliefs and what they are intended to manifest. That’s the role of the evildoers in this story; they help to galvanize the strength of Miss Peregrine’s, Jake’s and the children’s convictions, as well as everything that come with them. Such situations may be frustrating in the short term, but they ultimately make everyone stronger in the long run, perhaps even opening up further possibilities that hadn’t been previously considered. 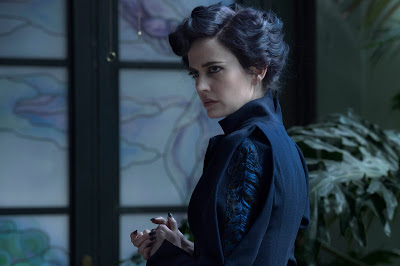 Curiously, even though the peculiars aren’t afraid to be themselves, they’ve also intentionally chosen to sequester themselves for the most part in specialized temporal milieus known as “loops.” One might legitimately wonder what underlies such a withdrawal. But, when we become practiced at creating our own reality, doesn’t it make sense to manifest an existence specifically tailored to our liking, even if it means separating ourselves from much of mainstream society and everyday life? In many ways, this is just a further extension of the peculiars’ conscious creation skills. And, based on what they’ve been able to create for themselves, they’ve materialized a pleasant sanctuary, one in which most of us would probably feel right at home. To live under circumstances we enjoy with peers we find compatible is the best of all worlds, and the peculiars show us how to achieve it.

The story line of this film delves into a number of other themes as well, such as questions about life, death and aging, and it offers an intriguing parable about historical events. Given everything that’s going on in the picture, some have criticized it for being needlessly complicated, even undecipherable. However, I prefer to think of it as offering a banquet of intriguing and thoughtful ideas, many of them intricately intertwined, all wrapped up in one neat little package. Decide for yourself, but, if you go in with an open mind – pushing past conventional limitations (the central point of the film) – you’re likely to come away with having had an entertaining cinematic experience.

Though a little slow to start, “Miss Peregrine’s Home for Peculiar Children” is full of macabre fun, splendid visuals and subtly effective metaphors. It’s also a celebration of what it means to be different yet to demand the acceptance and recognition to which we’re all rightly entitled. Admittedly, the pacing in the first hour needs a little quickening (which could have been accomplished with some astute editing), and the screenplay could stand a little tidying in spots, but overall there’s much to like here, especially in the highly inventive areas in which director Tim Burton traditionally excels. Have fun with this one, and don’t forget to closely inspect the details – you just might be pleasantly surprised at what you find.

Rejoicing in our differences should be cause for celebration. But, as author Caroline Myss has observed, those who announce their intent to stand out from the crowd are often shot on sight, metaphorically speaking, by less adventurous peers who are afraid that they themselves may one day be forced into comparable circumstances of their own. Yet, if we’re to be true to ourselves, we must not be afraid to recognize and embrace the qualities that distinguish us and then act on them in creating the reality we experience. To do less is to deny ourselves and to obstruct the expression of our true being, and fewer tragedies are greater than that. No matter how “peculiar” each of us may be in our own right, in the long run, it’s better to let those qualities shine than to keep them from ever seeing the light of day.