Skip to content
Home/Archives/‘Operation Avalanche’ asks ‘What do you believe?’

‘Operation Avalanche’ asks ‘What do you believe?’

From time to time, it’s not unusual for each of us to stand back, take a look at our existence and ask ourselves, “What are we to make of our world?” When we ponder that idea, many of us invariably turn to deciphering our beliefs in an effort – sometimes successful, sometimes not – to make sense of our reality. That’s the conundrum faced by a pair of naïve, idealistic neophytes in the quirky new thriller, “Operation Avalanche.”

This new “found footage” offering takes the genre in an inventive new direction, going beyond the cheesy horror flicks that have long typified it. Set in 1967, the picture follows the sometimes-comical, sometimes-sinister exploits of a pair of fresh-faced college grads (Matt Johnson and Owen Williams playing “themselves”) recently recruited by the CIA as part of its effort to mine American universities for the best and brightest young minds. The newly arrived nerdy, clean-cut novices look to find their way within the agency. But, no matter what work they’re assigned, more than anything else, they fancy themselves would-be filmmakers seeking opportunities to put their skills to use in an official capacity.

When word leaks out that a Soviet spy may have infiltrated the US space program, potentially threatening NASA’s efforts at being first to the moon, Johnson and Williams make a pitch to be named to the CIA team charged with exposing the mole. They propose posing as filmmakers producing a documentary about the Apollo program, a ploy that would give them virtually unfettered access to Mission Control, as well as a credible cover for their true intents. Before long, the duo sets off for Houston, convinced that they’ll be able to find their man and have some fun doing it along the way. If only they knew what they were getting themselves into. 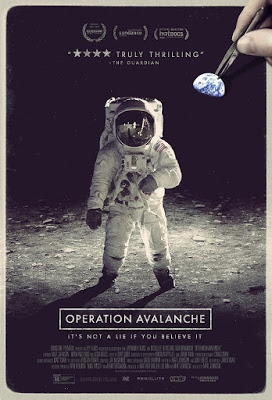 Once on assignment, Johnson and Williams soon find that there’s much more going on than they ever anticipated. Besides the Soviet spy threat, they also learn, through clandestinely recorded phone conversations allegedly involving NASA Administrator James Webb, that there may be big problems within the US space program that have nothing to do with espionage. With the US and the USSR at the height of the Cold War, their respective space programs carry tremendous propaganda value, and American officials express grave concerns about what a foul-up would mean, both scientifically and, more importantly, geopolitically.

Once again, Johnson and Williams step up with a solution. Given the nature of their proposal, their mission quickly changes, taking their work in directions they never envisioned. But, since the changes in their assignment still involve filmmaking, they happily go along with the program, especially when it affords them an opportunity to meet and interact with one of their directorial idols, Stanley Kubrick.

However, the deeper Johnson and Williams get into their assignment, the more ominous it becomes. The fun and games approach they started off with disappears, placing their mission, as well as their lives, in serious jeopardy, especially when it becomes apparent they no longer know who to trust. What’s more, when they begin to consider the implications of what they’re being tasked to do, they each begin wrestling with their conscience, especially if what they’re working on is allowed to proceed to completion. Indeed, can they truly live with what they’re doing, considering the ramifications involved? Of course, that will all depend on whether they’re able to keep themselves alive in the first place.

When we look at how our lives unfold, we’re often left with our heads spinning, especially if events don’t transpire as planned or hoped for. However, when we realize we’re at the center of the events we’re experiencing, we can’t deny the role we play in their manifestation. Recognizing that we’re responsible for what’s occurring gives us a new perspective on our world. Such an awareness is the starting point for understanding the existence of, and our role in, the conscious creation process, the means by which we manifest the reality we experience through the power of our thoughts, beliefs and intents. And, if Johnson and Williams are to make it through their challenges, they had better grasp the concept sooner rather than later.

The biggest issues the filmmaking duo faces involve figuring out the true nature of what’s happening and who to trust. To do that, they need to get their beliefs in order, particularly those related to their power of discernment. By paying attention to the input provided through their intellect and intuition – the chief influences in belief formation – they have an opportunity to incisively sort out their thoughts and, one would hope, use them to turn them to their advantage.

Discernment is especially crucial here, given the many forces at work in the manifestation of this story. All of those involved in the co-creation of this scenario have their own agendas – some at odds with one another – even if they’re all ostensibly part of the same larger event. Thus the ability to truly understand the nature of circumstances like these is essential if we want our contributions to them to work to our benefit. For Johnson and Williams, the stakes in this couldn’t be higher. 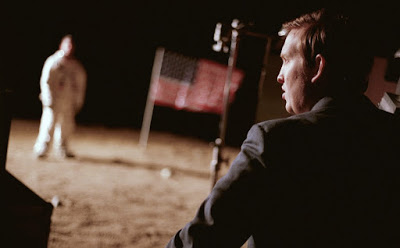 The race to the moon, with all its attendant fallout, comes under serious scrutiny in the quirky new thriller, “Operation Avalanche,” the latest offering in the “found footage” genre. Photo courtesy of XYZ Films.

Interestingly enough, even those with nefarious intents can play a valuable role in affairs like this. Manifestations at cross-purposes with those of would-be heroes keep them on their toes, forcing them to get creative and to push past preconceived limitations to come up with solutions (and the beliefs that materialize them) that counter efforts driven by questionable intent. Challenging circumstances prompt the need for creative solutions, and pushing the envelope in that regard is one of the hallmarks of conscious creation theory.

The foregoing also draws attention to the role integrity plays in the conscious creation process. When we don’t make allowances for it in how we form our beliefs, results can become distorted, creating new and potentially bigger challenges (and the need for yet more boundary-pushing creativity). However, when we seek to manifest our existence in line with this principle, the results can be rewarding, fulfilling and spot-on in terms of its authenticity.

Of course, for those with inherently questionable agendas, integrity may take on a “different” appearance. Indeed, it may seem to be wholly absent when, in fact, it’s actually present, even if it takes a form most of us either wouldn’t recognize or sanction. Those who genuinely believe in the need for things like secret wiretapping and other dubious undercover tactics will likely get the results they seek, no matter how appalling others may view such measures. Ultimately, however, such steps may end up yielding bigger issues down the road, so attempting to envision the long-term consequences may prove the prudent course overall.

This once again spotlights the importance of discernment. By employing it when assessing integrity-related matters, we can better pinpoint the character of our beliefs in this regard. This is particularly crucial when the implications are substantial. Johnson and Williams should heed this caution as they proceed, as should the rest of us.

“Operation Avalanche” is arguably one of the most clever offerings ever to emerge from the found footage genre. The cinematography is particularly noteworthy, effectively mimicking the look of old, crumbling, faded 8-mm film, with its crackly images and jarring hand-held camera work. The picture’s intriguing story line, authentically re-created look of the ʼ60s, hilarious sight gags, offbeat humor and ample suspense make for an unusual mix, breathing new life into a style of filmmaking that has grown progressively stale. Space helmets off to the creators of this fun and poignant little offering.

Taking a hard look at our world requires us to take a hard look at ourselves, usually from multiple standpoints. But, if we’re to make sense of it, we must be hard on ourselves, deftly employing our discernment skills, particularly when it comes to assessing the degree of authenticity we bring to the manifestation table. To do otherwise invites potentially serious consequences, both for ourselves, those with whom we interact and perhaps even others with whom we have no perceived connection. That’s a tall order to satisfy, but it’s one truly worthy of serious consideration given what’s potentially at stake.