‘Doctor Strange’ urges us to reach the peak of our potential

Even when we think we’ve reached the pinnacle of our success, there’s always another summit to be surmounted. That new peak may not be what we’re expecting it to be, taking us in a totally different direction from what we’re accustomed to, but the accomplishments we fulfill when we reach it could be far more fulfilling than we ever imagined. Such is the case for an arrogant know-it-all who embarks on a new life path in the riveting action-adventure, “Doctor Strange.”

Dr. Stephen Strange (Benedict Cumberbatch) is a supremely accomplished New York neurosurgeon – and he knows it. He makes sure everyone else knows it, too. In fact, he’s so enamored with his own abilities that he believes there’s virtually nothing he can’t do. And that may be true – that is, until he’s gravely injured in a horrendous car accident that leaves him clinging to life. It appears he’ll survive, but the tools of his trade – his hands – are so severely damaged that it’s unlikely he’ll regain full use of them for even everyday tasks, let alone performing surgical procedures.

Strange is determined to get back to where he was and vigorously pursues every therapy available to him. But the treatments he tries are all conventional and, given the extent of his injuries, can only take him so far. His colleagues, such as friends and fellow surgeons Dr. Christine Palmer (Rachel McAdams) and Dr. Nic West (Michael Stuhlbarg), try encouraging Stephen to make peace with his circumstances, but he won’t hear of it. He’s convinced there must be some way to get back to where he was before the accident. And, just when he’s about to give up hope, he learns of a treatment that helped turn around the life of a comparably injured patient (Benjamin Bratt). With nothing to lose, Stephen decides to pursue it – even if it means spending the last of his resources on a long shot that involves a journey to Nepal. 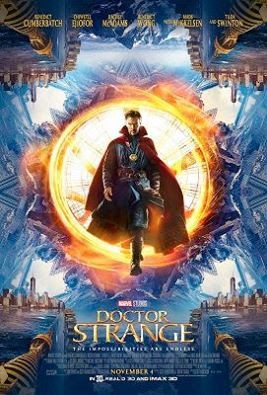 Once in Nepal’s capital, Kathmandu, Stephen searches high and low for Kamar-Taj, an enigmatic enclave that supposedly houses providers of the little-known healing treatment. When he finds it, with the assistance of a mysterious stranger named Mordo (Chiwetel Ejiofor), it proves to be nothing like what he expected. In fact, he learns that the healing “treatment” is not something that he’ll receive from someone else but, rather, that it’s something he’ll perform on himself – that is, after he’s properly trained in how to do it by a mystical master simply known as the Ancient One (Tilda Swinton).

Upon learning what that training involves, Strange is ready to pick up and leave. As someone trained in the rationale of science and reason, he’s not about to buy into anything that he considers airy fairy New Age nonsense. But, when he sees demonstrations of what’s possible when these special powers are harnessed, he’s amazed and agrees to go along with the program.

Progress comes slow at first, in large part because Stephen needs to get past his own ego. He even doubts whether any of this training is going to work. But, when pushed to the brink, he’s forced into tapping into his powers just to survive. It’s at that point that Strange begins to realize his full potential and what he can do with his newfound abilities.

In particular, Strange learns about a range of powers he never knew existed. In essence, he discovers the secrets of what most of us call the law of attraction (otherwise known as conscious creation), as well as the nature of multiple dimensions of existence. And, just as he became adept in his surgical skills, he becomes so proficient in these new abilities that he quickly masters them. He’ll need them, too, especially when he, Mordo and the Ancient One are forced into matching wits with an evil nemesis, Kaecilius (Mads Mikkelsen), who seeks to corner the use of these powers for his own self-serving purposes.

Will Dr. Strange and his cohorts succeed in their quest? Like what happens in most action-adventure releases, that, of course, is the key question here, too. But, given his newfound abilities, how he proceeds is what’s most important. His tactics may prove particularly enlightening, especially to audiences new to conscious creation/law of attraction philosophy, the means by which we manifest our existence through the power of our thoughts, beliefs and intents. By seeing these ideas put into action through specific, tangible deeds, viewers thus have an opportunity to learn about them in a meaningful, powerful way. This may allow the concepts to resonate with them profoundly, leaving an impact on them that they can take out of the theater and employ in their everyday lives.

The film is especially commendable for its accurate presentation of these notions. All too often, these metaphysical principles are explained in ill-serving vague, inaccurate or biased ways. In particular, these concepts are frequently presented only in terms of their “positive” attributes, their “negative” traits summarily dismissed as if they didn’t exist. However, as conscious creation practitioners are well aware, this philosophy treats its concepts as “neutral,” that they can be employed for either “good” or “bad” purposes, depending on the intents backing them.

A knife, for example, can be used as a life-saving surgical tool or as a murderous weapon. Likewise, certain chemical substances can be used for medicinal purposes or as deadly poisons. And then there’s the power of the atom, which can be harnessed to power a city or to destroy it. Countless other examples can be cited to illustrate this point, and all of them make clear the power of the beliefs and intents that go into the creation and deployment of these manifestations, for better or worse.

“Doctor Strange” makes clear that we can employ the conscious creation process for serving the greater good or for dastardly deeds. It all comes down to what beliefs underlie it. The film makes the distinction clear and shows us how we can use the practice in our own lives.

As the film shows, if we’re intent on using this process for altruistic purposes, we need to realize that we’re part of a larger whole, an individual voice in a greater chorus. And, to appreciate that, we must also get past our own ego. As the movie opens, Stephen clearly has his work cut out for him on this point. But, as he learns how to embrace a sense of humility and detach from self-serving outcomes, he’s able to move forward with his quest. This is in stark contrast to Kaecilius, who obviously wants to use this process only for his own selfish ends, largely because he hasn’t learned the valuable lesson that his opponent has. The examples set by these two characters in this regard provide us with significant insights to consider should we wish to tackle comparable challenges of our own. We should pay attention, too, because the consequences at stake in situations like this may be far greater than we realize.

While clothed in the form of an action-adventure film, “Doctor Strange” is actually, in many ways, a metaphysical treatise on the foregoing principles. It illustrates what it means to be a master of our own destiny, particularly when it comes to changing circumstances we believe unalterable, tackling challenges thought to be insurmountable and becoming the individuals we never envisioned we could be. The picture adeptly explains these points in easily understood layman’s terms and does so through a fun, rollicking rollercoaster ride. Those who like some substance with their fluff will certainly enjoy this well-executed fusion of meaningful teachings with a highly entertaining good time. Admittedly, some of the fight sequences go on a little long, there are some pacing issues in the last 45 minutes and Chiwetel Ejiofor’s hammy overacting becomes progressively tedious as the story unfolds. But a well-written script, superb special effects (especially in the 3-D version) and fine performances by all of the other principals make this worthwhile viewing.

Exceeding our limits is something many of us would like to achieve, even if we’re unaware of this aspiration. Sometimes it just takes getting out of our own way and letting our natural abilities flow through us. It can be a hard lesson, but as the good doctor’s experience shows, the effort in the end is well worth it. After all, the world may depend on it.