Staying on top of things when we’re under constant pressure to perform can be challenging enough, even under the best of circumstances. But, when we add to that issues of unresolved ambition, the pursuit of integrity, personal problems and health concerns, we might easily be pushed over the brink. Such is the case for a troubled television reporter seeking to do worthwhile work and make a name for herself in the disturbing new biographical drama, “Christine.”

Based on actual events, the film follows the life of 29-year-old Christine Chubbuck (Rebecca Hall), a struggling TV reporter in Sarasota, Florida, at a time (1974) when broadcast news was undergoing a number of changes, both technologically and in terms of content, even at the local level. Sensationalization of the news was fast gaining a foothold, giving rise to the “if it bleeds, it leads” philosophy still in use today. For stations like the one Christine worked at, such exploitation was seen as a way to increase ratings, a particularly important concern for those that needed to bolster ad revenues.

Needless to say, this radical new outlook was quite an adjustment for many veteran reporters, especially those accustomed to doing more conventional work. For someone like Christine, who believed that news should go beyond just presenting facts, this meant educating viewers on issues of public interest, especially those that might not otherwise receive much attention. Unfortunately, the kinds of stories Christine wanted to cover, like those associated with zoning issues, were about as interesting as watching paint dry. Her reports did little to help ratings, and, consequently, she began to be marginalized by the news director (Tracy Letts), who was under pressure from station owner Bob Andersen (John Cullum) to boost income.

Even though Christine railed at the new exploitative approach, she also wanted to make a name for herself, especially when she learned that Andersen was looking to recruit staff from Sarasota for his recently acquired station in Baltimore. She vacillated between doing the kinds of “thoughtful” pieces she had been reporting and embracing the “juicy” stories the news director was urging her to do. This often left her confused when trying to determine what would make worthwhile copy, a major frustration for her and a source of bewilderment for her colleagues who were trying to understand her. 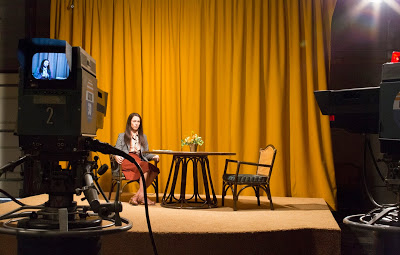 Local TV reporter Christine Chubbuck (Rebecca Hall) contemplates her career, her ambitions and her responsibilities as a journalist in the gripping new drama, “Christine.” Photo by Joe Anderson, courtesy of The Orchard.

Off-air, Christine had her share of challenges, too. She began experiencing health issues, which she initially chalked up to stress but later discovered were more serious. She struggled with her love life, which often left much to be desired, especially in her romantically ambivalent involvement with a colleague, anchorman George Ryan (Michael C. Hall). And then there was her strange relationship with her mother, Peg (J. Smith-Cameron), with whom she shared an apartment, as well as many an argument over seemingly trivial or even imagined issues.

This combination of factors left Christine a woman constantly on edge. Who was she? What did she want to become? What did she really think about her work and the responsibilities associated with being a journalist? It proved to be a lot for her to handle.

It’s difficult to talk about this film without playing spoiler, something I’m highly reluctant to do. Even with the relative notoriety of this story, which is widely known and in the public record, to preserve the picture’s impact (particularly for those unfamiliar with Christine’s history), I won’t divulge what happens, other than to say it’s indeed tragic. The film aptly depicts what it means to wrestle with multiple, seemingly overwhelming challenges simultaneously, circumstances that many of us can probably relate to these days. Christine’s experience provides a poignant cautionary tale for anyone who seems destined for their own descent into madness.

Circumstances like these naturally raise the question, how could this have happened? In many ways, Christine comes across as a bright, organized consummate professional, sincere about what she hopes to accomplish through her work. But, then, at other times, she seems out of touch, inept and overly emotional over seemingly inexplicable issues. Given her goals, however – the simultaneous pursuit of ambition and integrity – the combination proves a volatile mix, one in which the individual objectives aren’t always compatible with one another. And, when these get added to the pressures of her personal life, it’s almost more than she can bear. 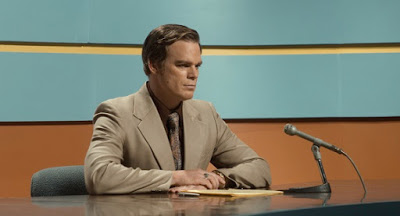 Situations like this illustrate the importance of getting a handle on not only what we want to achieve, but also how we see ourselves. And this requires us to get a handle on our beliefs, the means by which we manifest what we experience through the conscious creation process, the mechanism that brings our reality into existence.

When we’re clear about what we hope to accomplish, our reality tends to reflect such lucidity, resulting in an existence full of creations that suit our expectations. However, when we’re unfocused about our hoped-for achievements, the result is usually chaos and confusion. This is particularly true when our beliefs encompass inherent contradictions. The beliefs tend to cancel one another out in these scenarios, or they lead to the materialization of highly distorted outcomes. In either case, the results are far off the mark from what we hope to attain.

In Christine’s case, for instance, she’s big on doing work characterized by integrity and high-mindedness. She wants her work to be a shining reflection of herself, and she hopes that her audience will get something meaningful out of the experience. But, given the largely boring nature of much of her work, it’s hard to imagine her viewers getting much out of them beyond 40 winks.

At the same time, though, she also has big aspirations about being a reporter in a top 30 market, like Baltimore, but that’s a position she’ll attain only by getting noticed. And getting noticed means doing the kinds of “sexy” stories that her news director (and, most likely, audiences) want to see.

So how does a reporter make a story about zoning issues captivating? That would be quite a trick, even for the most creatively minded journalist. For someone like Christine, who struggles with creating on-air stories that reflect either of the traits she aspires to, let alone both, the process must ultimately become utterly maddening. The end products come out being “distorted” from fulfilling their true, underlying intents. They fail to satisfy audiences and the powers that be, which, in turn, lead to the dissatisfaction and frustration of their creator. Under conditions like this, is it any wonder that the protagonist is left puzzled, exasperated and, in the end, angry?

No matter what aspect of existence we work on creating, Christine’s story offers us a valuable cautionary tale about how to proceed and the pitfalls to avoid. If conditions like those she experiences are allowed to persist, the outcome could prove devastating for us, as well as those we serve and who care about our well-being. We would be wise to take the necessary time to look within, to sort out what we most dearly want to achieve and to focus on the materializing beliefs that are most likely to make such outcomes possible. To do otherwise may well prove to be an exercise in disappointment, vexation and tragedy. 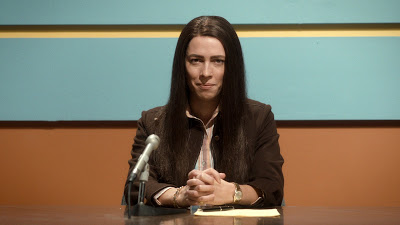 “Christine” provides a riveting, albeit troubling portrait of an ambitious but disturbed woman’s attempts at reconciling the challenges of her life. Rebecca Hall gives a phenomenal, Oscar-worthy breakthrough performance, one that has already earned her the best actress award at this year’s Chicago International Film Festival. Director Antonio Campos’s latest is definitely not an easy film to watch, but it’s one that’s difficult to take your eyes off of – not unlike the work the protagonist seeks to create for herself.

Despite its many strengths, the film is not without its faults, such as a concluding sequence that goes on entirely too long and employs an overly derivative ending that’s a little too obvious in its dramatic irony. Nevertheless, the film has much to offer, and, for its efforts, it has earned an Independent Spirit Award nomination for best first screenplay.

Reaching for the top is certainly a laudable ambition, but, if we can’t be ourselves when we engage in its pursuit, we may find ourselves wanting, even longing in desperation, an outcome sure to leave us even worse off. Getting clear about what we really hope to achieve – and how to go about doing it – could well help us stave off such frustrations. But can we realistically achieve that? Stay tuned.