‘A United Kingdom’ showcases the power of love

The power of love is undeniable. In fact, when employed skillfully, it can work wonders, not only in interpersonal relationships, but also in circumstances that have wider ramifications, some of which may be unforeseen at the outset. That’s the surprising and amazing outcome for a romance once considered taboo, one even with international implications, as depicted in the new historical love story, “A United Kingdom.”

In the late 1940s, Prince Seretse Khama (David Oyelowo) of the southern African nation of Bechuanaland (now Botswana) attends law school in London in preparation for his ascendancy to the throne, a destiny that has been awaiting him since the untimely death of his father, the king, while he was a young boy. During Seretse’s upbringing, the affairs of the nation have been handled by his uncle, Tshekedi (Vusi Kunene), who has dutifully served as regent. And now, with his education nearly complete, the prince is summoned home to assume his role as the country’s new king. But, before leaving, an unexpected development occurs – Suretse falls madly in love with an English woman, Ruth Williams (Rosamund Pike).

The attraction is instant and intense. It’s also one that’s frowned upon by the members of both Suretse’s and Ruth’s families. Yet, despite this opposition, Suretse refuses to return to Bechuanaland without marrying the love of his life, an act the couple defiantly carries out. However, this decision carries serious consequences, not only for the future of their marriage, but also for the fate of international relations at the southern tip of Africa. 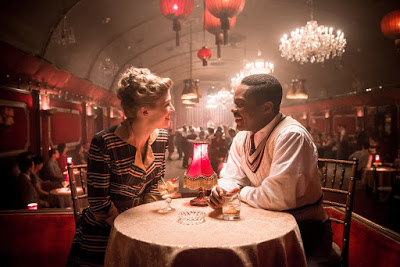 As a British protectorate, Bechuanaland is seriously beholden to the wishes of the English government, particularly the dictates of Sir Alistair Canning (Jack Davenport), who oversees the crown’s diplomatic interests in the region. And, under the complicit regency of Tshekedi Khama, the British government has grown accustomed to getting what it wants. But the prospect of a Black king and his White queen coming to power is unacceptable, sending shockwaves throughout the region, as well as the member states of the British Commonwealth.

This is particularly true in neighboring South Africa, which is actively implementing its racially segregationist policy of apartheid. As a member of the Commonwealth, South Africa is not pleased with the idea of an interracial couple taking charge in an adjacent state and places pressure on the crown to thwart Suretse’s plans. Given British dependency on South Africa’s abundant and lucrative natural resources, Canning and his minions, like Rufus Lancaster (Tom Felton), feel compelled to comply. And so, with their marching orders in hand, Canning and Lancaster clandestinely seek to prevent Suretse and Ruth from rising to power – and to even be together as a married couple.

Confident that it has matters in hand, the British government proceeds with its obstructionist plans. The ante for this gets further upped when it’s suspected that natural resources like those found in neighboring South Africa may also be present in Bechuanaland. However, for all its presumed airtight maneuverings, the crown fails to take into account the power of love and what it can accomplish – especially when in the hands of a devoted couple seeking to pursue its rightful calling, one that ultimately has impact that extends beyond just the future of their relationship.

The couple’s willingness to proceed with their plans, despite the odds, shows an unshakable faith in their love for one another. But, perhaps even more importantly, it shows an unwavering conviction in their belief that their plan will succeed. And that’s significant, since their commitment to that underlying belief is crucial to their objective’s ultimate manifestation, just as it is with anything we seek to materialize through the conscious creation process, the means by which we bring our reality into being through the power of our thoughts, beliefs and intents. 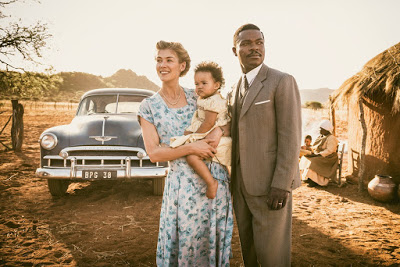 For Suretse and Ruth, their beliefs are initially most concerned with personal considerations, namely, the fate of their love and marriage. But, as quickly becomes apparent, those beliefs get caught up in broader concerns. And, even though those considerations are nearly always qualified by the dynamics of their unconventional relationship, they plainly have little to do with that; rather, they relate to matters of politics and international relations, with their romance pegged as a convenient scapegoat when things go awry.

Suretse and Ruth may not have initially envisioned themselves becoming embroiled in such sticky circumstances, But, once they did, it was up to them to devise the means to resolve them. And, ironically enough, their devotion to one another (and the beliefs driving it) helped provide the basis of their solutions. Their belief in their love for one another not only helped solidify their personal relationship, but it also provided the means for bringing the political considerations to the fore. By doing so, they helped shape the future of their nation, something that benefited them and all of their countrymen, even if it wasn’t something they necessarily thought about when exchanging vows.

Even though Suretse and Ruth may not have envisioned the difficulties in which they found themselves, on some level they may have sensed the need to go through them to bring about larger changes. For instance, while attending law school in London, Suretse explains to peers from his homeland his belief in the need for the creation of a racially unified Africa, one where all races exist on an equal and integrated footing. This was something of a radical notion among both Blacks and Whites at the time, yet, since both races inhabited the continent, Suretse believed it was positively essential that everyone get along if there were to be a harmonious future for Africa. He may not have pictured that goal being fulfilled by way of his interracial marriage and everything that got swept up in its wake. But the seed of racial harmony nevertheless emerged as a belief from his consciousness, ultimately surfacing in its eventual myriad manifestations.

In bringing about these results, Suretse and Ruth effectively drew upon all of the faculties that go into successful belief formation. In particular, they made wise use of their intuition, the element of belief formation that many of us tend to underutilize, despite its importance to the process. Logic may well have told them that getting married was a bad idea, but their intuition convinced them otherwise, and, thankfully, they listened to it. This proved essential not only to the success of their relationship, but also to all of the reforms they were eventually able to enact in Bechuanaland. And, in that regard, this is yet another example of the power of unshakable faith – and of love itself. 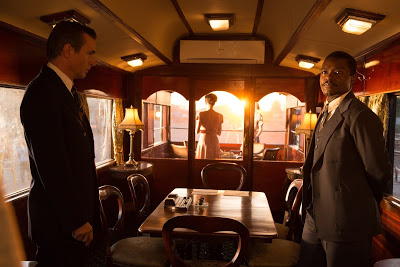 As in her previous film, “Belle” (2013), director Amma Asante has again capably told a captivating love story that carries implications that extend beyond romance. Although a bit formulaic at times, this love story with a political twist imparts an intriguing tale of a little-known bit of history, all the while never losing sight of the romance that lit the fuse of an intense international controversy. With fine performances by Oyelowo and Pike, a cogently written script, and fine production values, this release is an enjoyable, entertaining and informative offering that delights, surprises and inspires on multiple levels.

Love truly is a force to be reckoned with, and those who attempt to deny it do so at their peril. “A United Kingdom” makes that abundantly clear, showing us just how powerful it can be. What Suretse and Ruth wrought has had implications that have lasted to this very day, impressing even such accomplished leaders as Nelson Mandela. That’s saying a lot. The example set here thus provides a potent source of inspiration to anyone seeking to overcome obstacles, be they in romance, politics or even everyday life itself.