What does it take to push for a just cause? As much as we might like to think to the contrary, it often takes more than just good intentions; it frequently requires a concerted effort, one that may even include measures some of us would see as questionable, troubling or manipulative. Indeed, when it comes to achieving hoped-for outcomes in certain high-stakes issues, sometimes we may have to send a bulldog into the fight on our behalf. But where do we draw the line? How far are we willing to go when it comes to employing our personal power? Those are some of the issues raised and addressed in the gripping political drama, “Miss Sloane,” available on DVD, Blu-ray disk and video on demand.

Elizabeth Sloane (Jessica Chastain) is the best at what she does. As a high-powered Washington lobbyist, she’s as good as it gets when it comes to securing the results sought by her clients, some of whom clearly place their own interests above those of the public. She walks a fine line between what’s legal and what’s not, but she’s determined to get her way, all the while scrupulously insisting that everything she does is in accordance with the law.

Miss Sloane’s phenomenal success stems from her fanatical devotion to her work. She keeps a schedule that rarely includes sleep (she pops a barrage of pills to keep her going) and is almost entirely devoid of a personal life (except for occasional trysts with the best sex partner money can buy (Jake Lacy)). This may not be a lifestyle others would envy, but, if that’s what it takes to get the job done, she’s willing to do it. 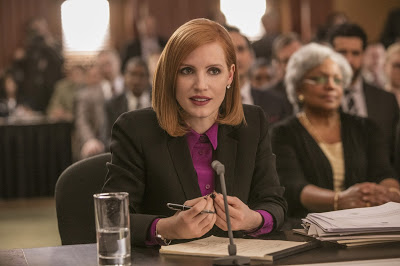 Meanwhile, because of her notable track record, Elizabeth’s boss, George Dupont (Sam Waterston), is favorably impressed with her work and increasingly steers big-name clients her way. She relishes the challenges and readily accepts them – that is, until George asks her to represent a constituency she finds personally objectionable: the gun lobby. It’s a proposal at which she draws a clearly defined line.

Elizabeth’s uncharacteristically flippant response to the proposal dumbfounds everyone, especially George, who has been trying to acquire the gun lobby account for some time. He’s outraged at her reaction, throwing her future with the firm into question. But, given Elizabeth’s reputation, it’s not long before another offer comes her way from a competing lobbying firm, one headed by Rodolfo Schmidt (Mark Strong), whose organization is more than willing to oppose the controversial initiatives put forth by the firearms community.

Miss Sloane agrees to Rodolfo’s offer, but she’s adamant that she have free rein to carry out her plan as she sees fit, a proposal to which he agrees, albeit somewhat hesitantly. She also convinces most of her staff to follow her to the new organization, the lone hold-out being her protégé, Jane Molloy (Alison Pill). Elizabeth is disappointed by Jane’s decision, but she wastes no time getting on with her plans, which include a number of her prototypical unconventional measures. 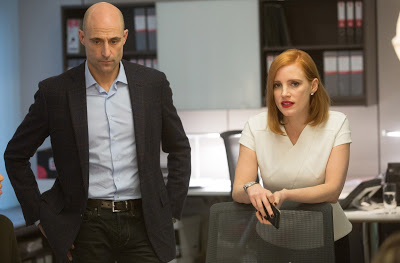 As the lobbying campaign unfolds, however, Elizabeth finds herself in deeper water than she’s accustomed to. She’s well aware that, if she succeeds in making her case, it will be the biggest triumph of her career. But, if she fails, it could mark the end of her days as a lobbyist. And so, to combat the most powerful forces she’s ever faced, she continually ups the ante, taking steps that stun her colleagues, such as trusted aide Esme Manucharian (Gugu Mbatha-Raw), as well as her boss and even herself.

How far will she go? Can she cope with the mounting criticisms of her tactics? What’s more, can she survive the growing onslaught of accusations being thrown at her, such as those raised by influential Congressman Ron Sperling (John Lithgow)? And is she even clear about why she’s doing what she’s doing – for the pursuit of a just cause or her own personal self-aggrandizement? In short, what does it all mean for her – and a public that’s to be seriously impacted by her efforts?

Those are questions that get answered as the film plays out, which is full of twists, turns and misdirections, many of which no one sees coming, even the spin mistress herself. It’s a thoroughly captivating story that grows progressively engaging the further you get into it, presenting the kind of edge-of-your-seat narrative that will keep you locked in place right up until the final credits roll.

At the heart of this story is the management of one’s personal power. This is an especially crucial concern when we make use of it through the conscious creation process, the means by which we manifest the reality we experience through our thoughts, beliefs and intents. As insubstantial as such intangible notions may seem, they’re not to be taken lightly; they possess phenomenal amounts of power capable of yielding equally impressive results once unleashed. They’re tools that we must treat with care and respect, tempering their use and management with a judicious eye and an ever-vigilant awareness of the responsibility associated with that.

Moreover, the greater the faith we place in these convictions, the stronger they’re likely to become, producing results commensurate with such enhanced potency. And, based on the outcomes Miss Sloane realizes, she’s quite obviously a master of faith in her beliefs, firmly entrenched in them and what they’re designed (and, in her case, destined) to achieve. This capacity can prove to be a real asset when it comes to envisioning and manifesting unconventional conceptions, the sort that have become Miss Sloane’s trademark. 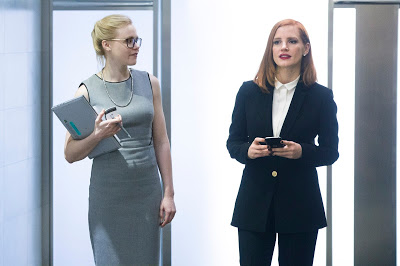 But, given the lengths to which she’s willing to go, is Elizabeth taking things too far? Is she so singularly focused that she loses sight of the potential fallout that comes from her beliefs and actions? Does she slip into the practice of un-conscious creation, whereby a belief in results at all costs trumps all other considerations? What’s more, in light of her all-encompassing determination, isn’t it possible that she runs the risk of running roughshod over her divine conscious creation collaborator (“pushing the Universe” as it’s sometimes called), leaving herself open to all manner of backlash?

Like all of us, these are considerations Elizabeth seriously needs to address. This requires us to take stock of our beliefs, assessing them honestly in terms of what they’re meant to achieve. But that also demands that we get clear with ourselves. For instance, are our motivations governed by service to others or service to self? Are we employing means that are wholly ethical, or are we skirting the rim of illegality or immorality, to attain the goal we seek? Can we legitimately justify our intents, or are we backing into rationalizations of questionable authenticity? And, perhaps most importantly, are our proposed efforts benign, or will others be negatively impacted? If we verge into suspect territory in any of these regards, we may need to step back and reconsider what we’re doing. No cause, no matter how noble, can be justified by thoughts, beliefs and intents that lack integrity and carry the potential to unduly inflict harm.

“Miss Sloane” received comparatively little fanfare when it was released last December. It somehow got lost in the shuffle of all the awards season releases, somewhat unusual for a film with a major distributor behind it. Still, director John Madden’s latest received favorable critical acclaim, as well as a very well-deserved Golden Globe Award nomination for best lead actress in a drama, just one of many fine performances in the film. 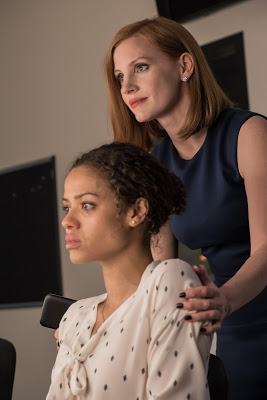 Some have criticized the story as implausible and unrealistic, that no lobbying effort would ever collectively incorporate so many extreme measures and incidents as are included here. However, that’s not to say that the events and initiatives depicted in this story haven’t occurred individually in connection with separate issues at one time or another. In that regard, then, the film gives us a frank look into what goes on behind the scenes in connection with high-profile lobbying efforts, what it takes to secure results and what that means for all of us who typically watch from the sidelines. Realizing that, it also shows us what we need to know about how these matters work – and what we might consider doing to help fix the system.

Seeking to sway others of the merits of a cause requires convincing arguments, commitment and an unwavering passion. But how much is too much? “Miss Sloane” helps to shed light on that for us. Let’s just hope we’re all paying attention.