‘Tanna’ meditates on the power of love

Who we love is something we should be able to decide for ourselves, but it hasn’t always been that way, especially in many of the world’s traditions-based cultures. With arranged marriages the norm – relationships frequently driven by considerations having nothing to do with love – those who choose to step outside that custom engage in what’s looked upon as radical or even taboo. But, given the power of love, sometimes even tradition can’t withstand such pressure. What it means to take such a drastic step – and the consequences that come from it – provide the focus of the fact-based, Oscar-nominated romance, “Tanna,” now available on DVD, Blu-ray disk and video on demand.

On the Melanesian island of Tanna in the remote Pacific nation of Vanuatu, time seems to have stood still. The ancient tribal nature of the local culture continues to thrive to this day, one of the few places in the world where such a way of life has managed to persist. And, for the Yakel people of this South Seas island, these longstanding traditions apparently suit them just fine. But, in the late 1980s, those customs were called into question when it came to a fundamental aspect of life – marriage.

Having long practiced the tradition of arranged partnerships, tribal members learned to live with it, hoping that love would eventually emerge out of such arrangements, even if it wasn’t present at the outset. Such predetermined relationships generally had little to do with romance and everything to do with practicality. They were often set up to settle disputes between combative clans, a means of imposing peace by a bond of blood. 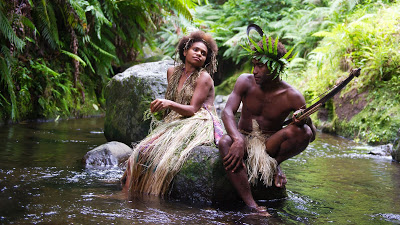 So it is in the film, when a young woman, Wawa (Marie Wawa), is offered up by her tribe to Kapan (Kapan Cook), a member of a rival faction, as a means to promote peace between the two groups. The tribes’ chiefs (Mungau Yokay, Mikum Tainakou) agree to the arrangement and are apparently happy with the plan. But no one ever bothers to ask Wawa, who is deeply in love with Dain (Mungau Dain), a member of her own tribe. And that’s a problem.

As plans proceed to hand over Wawa to her new husband, she’s plainly unenthused, showing little interest in the idea, an attitude that concerns her parents (Lingai Kowia, Linette Yowayin) and grandmother (Dadwa Mungau), particularly when she reveals the reason for her indifference. They tell her that they sympathize but insist that she carry through with her responsibility, given the stakes involved. But that pressure has little effect, especially when she quietly disappears for a tryst with Dain, a gesture that she’s convinced will so offend Kapan that he’ll summarily reject her when he hears of her allegedly disgraceful act. But, in the interest of preserving the agreement, Wawa’s family and her tribe’s leaders seek to keep that incident secret. And, to add an extra level of insurance, they banish Dain from the tribe. What they don’t count on, however, is Wawa disappearing, too, to follow her man – and her heart.

Those who dare question the status quo often open themselves up to serious scrutiny and dire consequences. However, sometimes those risks must be endured to follow what we know is right. Coming up with the means to make such situations work out is the aim of the conscious creation process, the philosophy that maintains we manifest the reality we experience through the power of our thoughts, beliefs and intents. And, in a context as highly personal and intimate as this one, the desire to succeed is often strong. But it also requires commitment, determination and a will to make it happen. 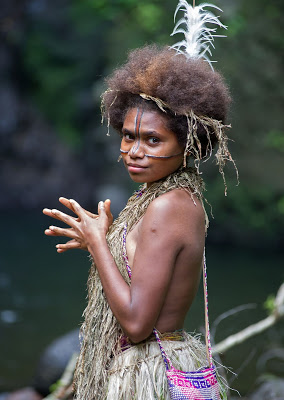 Following her heart carries serious implications for Wawa (Marie Wawa) when she’s unwittingly caught up in a conflict between two tribes in the Oscar-nominated romance, “Tanna.” Photo courtesy of Lightyear Entertainment.

In circumstances like this, we must frequently draw upon everything we’ve got in terms of our envisioning skills. By forming beliefs about what we want to achieve and the means for making it happen, we stand a good chance of making our dreams come true. This usually requires us to consider options that we’ve never entertained before or that even go beyond any tried and true methods we’re aware of. If Wawa ever hopes to be with Dain, this is something she’ll certainly need to do.

However, if we’re willing to push past those barriers, there’s no telling what we might be able to accomplish, both for ourselves and others who are similarly situated. By setting such a confident and defiant example, we can change conditions that have sweeping implications, perhaps even altering the nature of the culture itself. This is a prime example of the conscious creation notion that we’re all in a constant state of becoming, ever evolving to something new in a continual process of self-discovery.

What’s more, whenever we help to bring about such beneficial new developments, we engage in the practice of value fulfillment, the conscious creation principle associated with being our best, truest selves for the betterment of ourselves and those around us. For something as fundamental as having the freedom to choose our own significant other in a culture that has typically prohibited such a practice, that’s a radical change indeed. Those who benefit from the implementation of something as heartfelt and personal as this owe much to those who helped usher it into place. 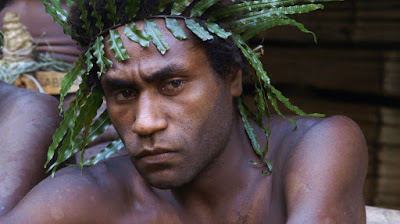 “Tanna” clearly demonstrates what it means to be in love and the lengths we’ll go to for it. This innovative production was filmed on location on a shoestring budget with a skeleton crew and only the most basic cinematic technology. What’s more, the filmmakers drew entirely upon members of the Yakel tribe for the cast, none of whom had ever even seen a movie, let alone acted in one. Nevertheless, the result is an excellent offering reminiscent of time-honored classics like Romeo and Juliet set in a lush tropical paradise, with an array of surprisingly good performances and gorgeous cinematography. To be sure, there are times when the film plays a little like a National Geographic documentary, but, thankfully, those sequences are minimal and don’t detract from the picture’s overall quality. For its efforts, the Australian production earned a very deserving Oscar nomination for best foreign language film, whose dialogue is presented entirely in the native Nauvhal language.

Sometimes it takes a radical act to bring about change, even when it comes to something as basic as who we choose to share our lives with. Traditions can be challenged and without necessarily incurring undue consequences. But, should we attempt to stifle the heart, we may pay a heavy price, both for ourselves and the community at large. And, in that regard, the lessons of “Tanna” should serve as a potent cautionary tale to us all.