‘Letters from Baghdad’ celebrates the life of a visionary

Making one’s voice heard amidst a thunderous throng of opposing viewpoints can be difficult, especially in the face of an entrenched consensus and when expressed by someone who possesses qualities that might tempt others to downplay the significance of those divergent opinions. Yet making the effort to get those views heard is important, particularly when the stakes are high. So it was for an incredibly insightful woman seeking to be heard in the geopolitical arena, an area where others often tried to drown her out, an experience outlined in the engaging new documentary “Letters from Baghdad.”

British-born diplomat Gertrude Bell (1868-1926) is far from a household name, yet her influence was significant in the early 20th Century, even if she wasn’t always taken seriously by some of her peers. As a longtime explorer of the Middle East, she became an accomplished scholar of the complex culture of the region, penning a number of books and papers about it. She thoroughly understood the nuances that characterized the tribal societies of the region, as well as the significant impact that occupying forces had on those cultures. She had much to offer to those who would listen to her; the trick, of course, was getting them to listen. 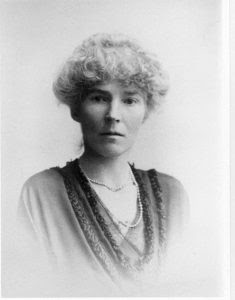 The life story of British-born diplomat Gertrude Bell (1868-1926) provides the basis of the inventive new documentary, “Letters from Baghdad.” Photo courtesy of Between the Rivers Productions.

In the male-dominated world of international politics, it wasn’t easy for a woman to be taken seriously. But those who took the time to listen to her could see and appreciate the depth of her knowledge, and they heartily embraced and endorsed her views, even if they put themselves in the minority for doing so. This earned Bell a number of prestigious diplomatic assignments with the British government, including being named the only female delegate to the Paris Peace Conference that formally ended World War I. Those who valued her opinions, like T.E. Lawrence (“Lawrence of Arabia”), Winston Churchill and Sir Percy Cox, appreciated her input with various matters, most notably drawing the borders and setting up the government of post-war Mesopotamia (now Iraq). She would also go on to become the driving force behind the establishment of the world-famous National Museum of Iraq.

Yet, for all of her accomplishments, Bell also had her share of disappointments. For instance, in helping to set up the Iraqi government, she was discouraged by some of the ways it was mishandled. In particular, she was disappointed that what should have been an Iraqi government with British advisors had turned into a British government with Iraqi advisors. She could see the dangers in the imposition of Western ways on a traditions-based culture not accustomed to such practices, a prescience that would prove to be uncannily accurate years later.

Still, her accomplishments are noteworthy, and she overcame a number of obstacles to fulfill those goals. Much of that success can be attributed to her mastery of the principles of conscious creation, the philosophy that maintains we manifest the reality we experience through the power of our thoughts, beliefs and intents. Admittedly, it’s highly unlikely that she was familiar with this line of metaphysical thought, but, through what she accomplished, it’s apparent she knew how to employ its principles. 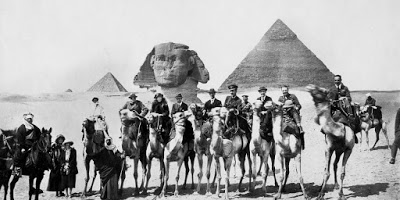 British-born diplomat Gertrude Bell was one of many emissaries, such as Winston Churchill and T.E. Lawrence, who traveled to Egypt to help determine the future and fate of the Middle East after World War I, one of her many diplomatic undertakings chronicled in the new documentary, “Letters from Baghdad.” Photo courtesy of Between the Rivers Productions.

For instance, Bell’s success as a woman in what was predominantly a man’s world at the time was a remarkable achievement. And she did so because she created that outcome. On some level, she believed that gender was irrelevant to understanding and shaping the workings of international politics. To that end, she successfully envisioned herself as a contributing member of the delegation that stepped to the forefront of such endeavors, one who earned the respect of colleagues, made her voice heard and even managed to silence some of her critics.

Of course, Bell was astute enough to adequately prepare herself for forming the beliefs that would underlie her manifestation plans. Her formal education and her experiences in the field richly served her intellect, while her observations of the lands and cultures she visited fed her intuitive understanding of those societies. That was significant, given that the intellect and intuition are the chief sources of input that fuel belief formation, a skill at which we should all become proficient as means to master our materialization efforts.

With such knowledge in hand, Bell was able to envision outcomes that went beyond the norms of the day. This enabled her to look past the constraining Western views of many of her colleagues, prompting her to come up with proposals that suited the region’s prevailing conditions, circumstances very different from what most of her peers were accustomed to. It’s unfortunate that some of her ideas weren’t taken to heart; they may have helped to save us considerable difficulty years later. 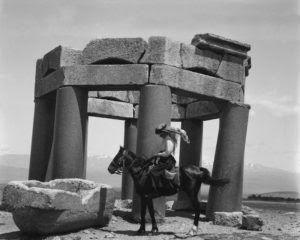 Years of studying and exploring the Middle East made British-born diplomat Gertrude Bell (1868-1926) an expert on the region’s culture and antiquities, as outlined in the new documentary, “Letters from Baghdad.” Photo courtesy of Between the Rivers Productions.

It’s astounding how someone who had achieved so much – having even become known as the female Lawrence of Arabia – has come to be a virtual unknown today. Thankfully, “Letters from Baghdad” brings her back to life, drawing exclusively upon her own words and those of her contemporaries, including personal letters, diaries, writings and official documents. Bell’s words are enlivened through the voiceover narration of Tilda Swinton, and those of her colleagues are expressed through re-created actor impersonations. Intercut with this material is a wealth of archival footage, many of it never seen before, depicting the Middle East of the late 19th and early 20th Centuries.

Directors Zeva Oelbaum and Sabine Krayenbühl have assembled a remarkable documentary that provides a comprehensive view of its subject both personally and professionally, a rare fusion indeed. Its inventive cinematography, blending black-and-white and colorized footage, makes for intriguing viewing, bringing the images to life in a variety of ways. Admittedly, the narrative would have benefited from some additional historical context to better inform viewers who are less studied on the subject matter of the period, but, this shortcoming aside, the film presents a candid look into the life of someone who wielded considerable influence – and may have been able to accomplish even more were it not for the archaic prejudices of her day.

The successes of a visionary inspire us all, especially one who overcomes significant challenges to see his or her objectives realized. Gertrude Bell was one who possessed – and made use of – such prophetic insight. It’s indeed fortunate that her achievements have been resurrected through this film, providing us with the kind of inspiration we can all draw from in seeking the fulfillment of our own endeavors.