‘Dave Made a Maze’ explores the labyrinth of consciousness

What lurks inside our mind? Most of us probably just scratch the surface of what’s there. Some aspects of it would probably delight us, while others would likely be best left unexamined. But we’ll never know exactly what’s there unless we make an attempt to go in and explore the labyrinth of our consciousness. That can be especially tempting if we feel unfulfilled in our lives. However, should we embark on such an undertaking, we’d be wise to prepare for it, particularly when it comes to getting ready for the unexpected. Such is the quest of a melancholic thirtysomething in the unusual new indie release, “Dave Made a Maze.”

Dave (Nick Thune) is an aspiring artist who never finishes any of the projects he starts. He’s also frustrated that he spends his days working at jobs he hates, making little money and having nothing substantial to show for it. He longs for the experience of creative fulfillment, but it always seems to elude him – that is, until one weekend, when he’s home alone. With his significant other, Annie (Meera Rohit Kumbhani), out of town, he throws himself into a new artistic venture, the construction of a cardboard maze in his living room.

On the surface, the project probably seems like a fairly simple undertaking. But, the further Dave gets into it, the more he stumbles into a wrinkle that starts out annoying and progressively grows troubling. He discovers that the maze, from the inside, is considerably larger and more complex than from the outside – so much so, in fact, that he can’t find his way out. He feels lost and trapped, not sure how to proceed, especially when he learns that the maze also contains dangers that he hadn’t anticipated. What is he to do now?

When Annie returns from her trip, she’s surprised when she finds the cardboard structure before her and no sign of Dave. But, soon after her arrival, Dave hears her moving about the living room, and he calls out to her from inside the maze. He explains his situation but cautions her not to enter it because of the inherent danger. He asks her to contact his best friend, Gordon (Adam Busch), to see if he can come up with ideas for how he might make his escape.

Before long, Gordon joins Annie with a cavalcade of others in tow, including his friends Leonard (Scott Krinsky) and Jane (Kirsten Vangsness), hipster pals Greg (Timothy Nordwind) and Brynn (Stephanie Allynne), and an indie film crew (James Urbaniak, Frank Caeti, Scott Narver) that, for some reason, is fascinated with wanting to document events as they unfold. Everyone is intrigued by the maze, and they all want to go inside, despite Dave’s cautions. However, this eclectic cadre of curiosity seekers is soon overcome by temptation. They disregard the warnings and enter, where they quickly find that everything Dave said is true.

As the newly arrived explorers make their way through the maze, they find all manner of strange curiosities, some whimsical and fun, some enticing, some menacing, and some deadly. But, thankfully, in the course of their wanderings, they run into Dave, who helps guide the visitors through the structure. In the process, he and the others also discover new aspects of the labyrinth that he hadn’t come across before. At the same time, they also learn that a new danger lurks inside – a ferocious Minotaur (John Hennigan) determined to take out the uninvited strangers who have invaded his turf. 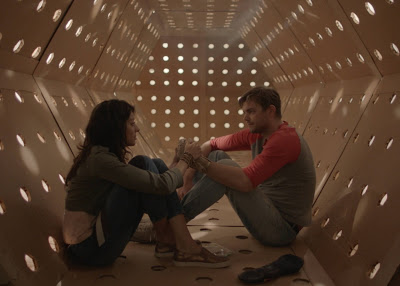 Aspiring artist Dave (Nick Thune, right) and his significant other, Annie (Meera Rohit Kumbhani, left), contemplate how to escape from a maze that threatens to trap them in the quirky new indie romp, “Dave Made a Maze.” Photo courtesy of Gravitas Ventures.

With this new threat now breathing down their necks, Dave and his cohorts are more motivated than ever to find a way out. But looking for a physical exit doesn’t seem to be a viable solution. Dave soon realizes that he must discover what’s preventing their escape, a process that requires him to look within his own mind. Given that the maze has come to physically symbolize the labyrinth of his consciousness, he must try to determine what has given the maze its shape and composition, something he learns rests with his beliefs and outlooks about life, his existence and his reason for being. Understanding those influences holds the key to helping him find his way clear. But the question remains, will he accept what he finds and abide by what he knows he needs to do to be able to get out of the maze?

This film readily brings to mind the principles of conscious creation, the philosophy that maintains we manifest the reality we experience through the power of our thoughts, beliefs and intents. If Dave is to resolve his circumstances, he must come to terms with what it means to be him, taking a hard look at his beliefs and how they have come to shape the nature and components of his existence. This is most crucial when it comes to his feelings about creative fulfillment and his habit of never following through on his projects. Why do his beliefs in these areas form as they do? That’s something he needs to analyze in depth, even if that means examining aspects of himself and his life that go beyond these considerations. His willingness to take on this task could well determine his fate and that of those who have accompanied him on his odyssey.

But there are other beliefs Dave needs to consider, too. For example, by routinely abandoning the projects he starts, he’s abrogating his sense of responsibility for his creations, a core consideration that goes hand in hand with what we manifest. Given how conscious creation works, however, we can’t realistically disavow ourselves from this aspect of the materialization process. Yet, considering Dave’s track record, he somehow seems to believe that he can, failing to recognize the various implications that accompany such an outlook. To begin with, casually shrugging off his projects keeps Dave from taking ownership of his manifestations while simultaneously perpetuating his feelings of frustration over never finishing anything. But, perhaps worse, his failure to embrace his sense of responsibility leaves him unprepared for what might happen if he should ever happen to follow through on one of his projects to completion. Because of his shortcoming in this area, and given how committed he seems to be to actually complete his venture this time, he’s overwhelmed by the responsibility – and the ramifications – that now stare him squarely in the face as he proceeds toward culmination. It’s especially important in this case, because his efforts carry the potential to seriously impact others besides him.

If Dave is ever going to get serious about his manifestation efforts, he needs to examine his beliefs – all of them – to understand how they shape what unfolds in his reality, especially those elements that have the potential to affect others besides himself. This is often true where artists are concerned, since their works frequently have influence that extends beyond themselves. And, given Dave’s aspirations, he’s no exception to this. The question, of course, is, can he step up to the plate and assume the responsibility that goes with his creations and their underlying beliefs? It seems that, now, as he peruses the corridors of his labyrinth of consciousness, he has an opportunity to find out. If he’s sincere about attaining the success he claims he’s seeking, one can only hope that he’s willing to make the effort – and up to the challenge. 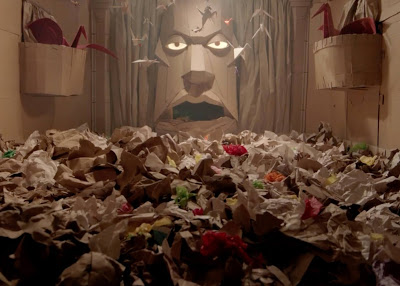 Fortunately for his sake, he’s got the maze itself to draw from in seeking inspiration. As a physically manifested expression of his consciousness, this complicated structure, with its seemingly endless complex of corridors, symbolizes the many components of Dave’s mind, one that’s tapped into the infinite range of possibilities for materialization always available to him. The key consideration in this, of course, is, will he make the effort to recognize, acknowledge and accept these capabilities? And, if so, will he then act upon them?

If Dave is going to make use of this resource, he needs to consider the breadth of options open to him, especially those that break through the self-imposed limitations that have previously held him back. By thinking outside the box – or outside the maze – Dave has a chance to conceive of and follow through on possibilities he hadn’t considered before. Doing so could pay significant dividends, too, such as enabling him to envision and manifest creations never dreamed of before. It just might get him to actually complete a project for once (or, at the very least, to help him find a way out of the maze).

Dave has a powerful incentive to follow through on this, too, now that he’s being stalked by a force with the potential to do him in, the Minotaur. Some might legitimately wonder why he would have manifested such a threat in the first place, but, in actuality, this creation could be seen as a blessing in disguise. By materializing such a menacing creature, Dave has drawn to him something that keeps him focused and intent on following through on his goal, a purpose not unlike the one served by the presence of the Wicked Witch of the West in “The Wizard of Oz” (1939). With the Minotaur constantly breathing down his neck, Dave has an opportunity to galvanize himself in his beliefs, particularly those related to determination, completion, fulfillment and the anticipated satisfaction that comes from all that. Considering the potential rewards of his efforts, a little well-intentioned intimidation could go a long way toward ultimately reaching a cherished goal. And that could prove to be the ultimate escape, one that liberates us from what we needlessly allow to hold ourselves back. 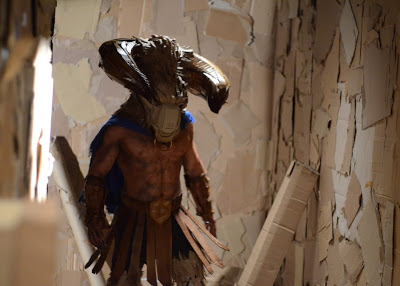 A ferocious Minotaur (John Hennigan) prowls the corridors of an unusual maze, threatening to attack a host of uninvited visitors who’ve made their way onto his turf in the inventive new homage to ʼ80s fantasy adventure films, “Dave Made a Maze.” Photo by Chelsea Coleman, courtesy of Gravitas Ventures.

There’s much more than meets the eye going on in director Bill Watterson’s debut feature. This quirky, fun-filled romp pays an edgy homage to ʼ80s fantasy adventure films like “Labyrinth” (1986), “The Dark Crystal” (1982), “The NeverEnding Story” (1984) and “Explorers” (1985), featuring inventive cinematography and a variety of clever special effects, some involving such unusual elements as puppets and elaborate forms of origami. It also serves up its share of big, sometimes-cheeky laughs. But there’s considerable food for thought here, too, making for an interesting overall mix of influences. “Dave Made a Maze” may be a little hard to find in theaters, but it’s available for on-demand streaming and will be released on DVD and Blu-ray Disc in the near future.

Learning what it means to live out one’s destiny may take some work, some of it internally and not just from the toil of one’s brow. But that part, though intangible, might ultimately prove more difficult, especially if we’re reluctant to do the work. Yet, if we make the effort to comply, we could find that the rest flows freely, providing the sought-after fulfillment that was once thought to be ever elusive. By working through the maze of our consciousness, we just might find our way out – and on to a path of satisfaction beyond expectation.