Skip to content
Home/Archives/‘Marjorie Prime’ wrestles with loss, the future of humanity

‘Marjorie Prime’ wrestles with loss, the future of humanity

Coping with loss is something that most of us have had to deal with at some point in our lives. This can take a variety of forms, too, from the loss of a loved one to the loss of something we value to even the loss of some part of our own selves. How we handle such situations varies from person to person, depending on our individual circumstances and coping capabilities. Some of us soldier on, getting through the circumstances and moving on with our lives. But others among us may need some assistance in approaching these challenges, especially if they’re associated with strong emotions, a tremendous or unrelenting sense of loss, or unresolved aspects that prevent us from progressing. Such are the questions raised in the haunting new sci-fi drama, “Marjorie Prime.”

Aging senior Marjorie Lancaster (Lois Smith) suffers from acute dementia. She loses a little bit of herself every day, a painful process for others to witness, such as her daughter, Tess (Geena Davis), and son-in-law, Jon (Tim Robbins). Fortunately, in this society of the near future, technology has been developed to help those like Marjorie whose memories are continually slipping away into the oblivion of the ether.

Computer-generated holograms known as “primes” have been created to assist those afflicted with conditions like Marjorie’s. Primes are highly customizable forms of artificial intelligence that can interact with those to whom they’ve been assigned. They can take on the appearance of the assignee’s choice, assuming the looks, vocal inflections and mannerisms desired. They can even be programmed to simulate loved ones, providing patients with virtual versions of those who are near and dear to them, regardless of whether those whom they’re patterned after are living or dead. In this way, primes can provide a certain degree of comfort and continuity with those whom they’re designed to serve. And, when programmed with input from those familiar with their source individuals, primes can even be imprinted with the memories of their corporeal counterparts.

Primes who possess such qualities can thus carry on relationships with those whom they interact. In Marjorie’s case, she has chosen to become involved with a prime who resembles a middle-aged version of her late husband, Walter (Jon Hamm). He looks like the man she fell in love with and married, and he routinely reminisces with “his” spouse in hopes of stimulating her memory capabilities, a move Marjorie’s health care providers believe will help to slow the progress of her illness. At the same time, Marjorie’s conversations with Walter help to take her mind off of her condition, making her circumstances somewhat easier to cope with. 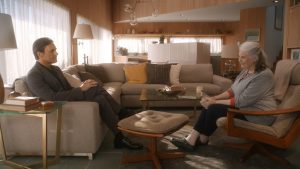 But primes are capable of doing more than offering comfort to the infirmed. They can be employed to help individuals cope with the loss of loved ones, especially those who have unresolved issues with those who have passed. Interactions with primes under these circumstances can help survivors talk out lingering questions that weren’t addressed before their flesh-and-blood twins died. Primes can even be imbued with qualities that their assignees wish their physical ancestors had possessed, making it possible to attain closure in a way that might not have been possible when dealing with the genuine artifact. Such attributes provide a degree of comfort to the living that might not have been available were it not for the creation of primes in the first place.

As a result of their development, primes thus bring a whole new meaning to what constitutes sentience, even what it means to be alive. The lines between those possessing intelligence of a natural and an artificial nature become blurred, especially when the differences distinguishing the two become harder to identify. In some ways, this speaks volumes about the capabilities of our technological developments. At the same time, though, it also raises questions about the future of what we consider humanity, issues that we might not be ready to address, no matter how adept the primes are at carrying out their assigned duties. The question then becomes, are we ready for that?

Practitioners of conscious creation – the philosophy that maintains we manifest the reality we experience through the power of our thoughts, beliefs and intents – readily recognize that we’re open to an infinite range of possibilities in any given moment, and this includes the myriad ways in which humanity can express itself. This opens up a tremendous number of new doors where matters of selfhood are concerned. And, in the context of what’s presented in “Marjorie Prime,” that means physicality need not be the quality that defines it – or limits it. Other options are available.

This should be self-evident, though; if we can conceive of an idea and earnestly believe in the possibility of its manifestation into existence, then all bets are off when it comes to applying hard and fast rules to the materialization process and what outcomes stem from it. Intelligence need not be limited by biochemical constraints; it may arise from what we consider to be “artificial” sources, in many ways mirroring or mimicking their “natural” counterparts. Something new and different but equally valid is given life, challenging long-held assumptions to the contrary. 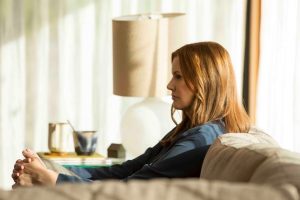 Some might think such notions as belonging only in the realm of science fiction. But, even if they can only be conceived in theoretical terms at this point, this does not rule out the potential of their eventual physical realization. For example, one need only look to the many hypothetical technologies envisioned in the early days of Star Trek that have since become full-fledged manifestations, even if their forms haven’t followed those of their fictional predecessors verbatim. And, when it comes to the ever-developing science of artificial intelligence, it’s easy to see how materializations in that area could just as easily follow suit, especially when backed by the powerful, highly focused beliefs of proponents (like scientist and inventor Ray Kurzweil), most of whom genuinely believe we’re well on our way to seeing such creations come into being.

Such thinking thus raises questions about how such technology would be used. As it’s employed in this film, for instance, artificial intelligence has been conceived of and subsequently employed for beneficial purposes, as seen in its use for helping to treat Marjorie’s condition. It could just as readily be used for some of the other aforementioned purposes as well. On the other hand, it could also be put to use for nefarious reasons, the consequences of which could be devastating. And, if potential deleterious ramifications are disregarded – even if the technology is launched with the best of intentions – such a lack of foresight and responsibility could produce results that are equally ruinous.

In any of these scenarios, it’s incumbent upon us to take stock of our beliefs, since they will determine what arises from them. “Marjorie Prime” helps to draw attention to these matters, showing us the benefits and possible drawbacks that can come from our conceptions and their resulting materializations. The technology at the heart of this story holds the potential to do a world of good. It can help us to redefine our notions about humanity and existence. It can enable us to surpass limitations in our beliefs and open doors to a host of glorious new inventions and applications. But, if we’re not careful in how we form and manage our beliefs, it can also lead us down paths we’d best leave unexplored. The question thus becomes, what are we going to do?

In many ways, the film leaves this question open while exploring a host of belief possibilities in terms of how we see ourselves, how we make use of our envisioned creations and what results from all that. No matter what results, however, in every case we can trace back their origins to the same intangible source, one that we all access, manage and employ in the materialization of the world that arises around us. 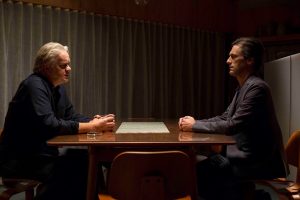 Walter (Jon Hamm, right), a computer-generated hologram known as a “prime,” receives background information about the life of the dementia patient he’s assigned to work with from the infirmed’s son-in-law, Jon (Tim Robbins, left), in the haunting new sci-fi drama, “Marjorie Prime.” Photo by Jason Robinette, courtesy of FilmRise.

“Marjorie Prime” is a thoughtful, insightful look at coping with grief, promoting healing, reconciling interpersonal discord, preserving memory, growing comfortable with technology, assessing the nature of reality and contemplating the fate of human evolution, all wrapped up in an intimate, beautifully filmed, well-acted, smartly conceived package. Although the script at times doesn’t quite rise up to the level of its narrative and Pulitzer Prize-nominated source material, the film nevertheless touches many bases and gives viewers much to ponder. With an excellent ensemble cast, highlighted by a superb performance by long-underappreciated character actress Lois Smith, this latest production from director Michael Almereyda once again distinguishes the filmmaker as one of today’s most inventive, ambitious and underrated talents in the business. “Marjorie Prime” may be a little difficult to find, playing primarily in theaters specializing in independent cinema, but it’s well worth the search.

Who we are and what we become are questions we all wrestle with, sometimes for large expanses of our lives. But, along the way, we’re also left to address a number of considerations that characterize the state of the human experience. How we respond and cope under such circumstances affords us an opportunity to learn valuable life lessons and to contribute to our understanding of the unfolding of the human condition, no matter how our beliefs shape the outcome and what form it ultimately may take. “Marjorie Prime” provides us with an intriguing look at those concerns and how we might learn from them in the formation of our own reality.