‘Free in Deed’ probes the power and peril of faith

When confronted with oppressively debilitating conditions, it’s only natural to long for relief, and, quite understandably, the harsher the ordeal, the more desperate we become. We may even reach a point where we are so distressed that we’ll do just about anything to be released from such burdens, sometimes going to lengths that surprise us. And, when the sought-after liberation finally arrives, we may be even more shocked, particularly if it assumes an unexpected form. Those are the issues faced by a trio of downtrodden souls in the moving, fact-based religious drama, “Free in Deed.”

Abe Wilkins (David Harewood) can’t seem to get a break. He lives in a seedy Memphis motel and is routinely burdened by financial, legal and job security issues, all of which also tend to impact his health. Somedays he finds it difficult to carry on. But, despite these circumstances, Abe soldiers on, largely because of the moral and spiritual support he receives from the clergy and followers of a storefront Pentecostal church, including its charismatic bishop (Preston Shannon) and spirited parishioners, most notably big-hearted Mother (Prophetess Libra) and the eminently compassionate Isabelle (Helen Bowman).

Abe isn’t alone in his challenges, though. Single mother Melva Neddy (Edwina Findlay) struggles to hold down a job while raising her two children, Etta (Zoe Lewis), a sweet young soul, and Benny (RaJay Chandler), a seriously disturbed preteen whose uncontrollable emotional outbursts frequently get him – and his mother – in trouble. As fate would have it, Melva has a chance encounter with Isabelle, who recommends that the two of them pray over Benny, a suggestion the young mother initially resists. However, when she sees her son begin to quiet down in response to the gesture, she’s impressed with the results, a reaction that prompts Melva to accept Isabelle’s invitation to attend church with her. 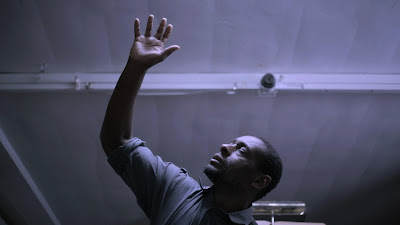 Through their attendance at services, Abe and Melva each begin to feel renewed, at least while in the company of their spiritual peers. Abe is so moved by the experience, in fact, that he quickly discovers he has the ability to help heal others, a skill that Mother and the bishop encourage him to develop once he’s named a junior pastor of the fellowship. However, despite his successful track record, Abe is initially hesitant to proceed with this task, especially since he seems unable to effectively heal his own life outside of the church. But, when others convince him to proceed, he confidently slips right into the role. And such confidence is something he’ll need when he’s called upon to tackle his biggest challenge of all – healing Benny.

Under Abe’s influence, Benny experiences calming effects far greater than what was achieved during the prayer session with Isabelle or from the many medical practices his doctor (Jon W. Sparks) tries. However, the effects aren’t permanent; not long after the boy settles down, he’s acting up once again, exhibiting behavior that seriously tries his mother’s patience and that even poses a danger to the well-being of his little sister.

What’s to become of Benny? Can Abe truly work his healing magic on the young man? Does he have enough faith in his abilities to see him through this ordeal? And what of Melva – how long will she be able to hold up under these trying conditions? Those are among the questions that get called as this intense spiritual scenario plays out.

Those who are fervently religious know well what results can arise from the power of faith and prayer. The intensity behind such beliefs and practices can indeed work miracles. In many ways, though, this is precisely what’s behind the success of practitioners of conscious creation, the philosophy that maintains we manifest the reality we experience through the power of our thoughts, beliefs and intents. And the more fervor we place behind them, the greater the likelihood we’ll arrive at the destination we seek. In that regard, then, no matter what one calls such doctrines or undertakings, the bottom line in either instance is fundamentally the same – to invoke our connection with the divine through our metaphysical initiatives to achieve the outcomes we desire. 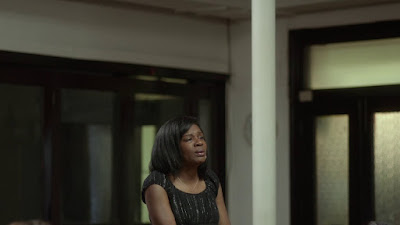 When Abe seeks to heal others, he’s clearly invoking conscious creation principles, even if he hasn’t heard of the philosophy or doesn’t use such wording to describe the practice. He’s earnest and passionate in his efforts, feelings that fuel and infuse his beliefs to materialize the intended outcomes. It’s as if he believes that’s his destiny.

But, as the story unfolds, it becomes apparent that Abe’s success only occurs in the church. Why so? Why is he unable to employ the same healing principles to his own life? For that matter, one might even wonder why he can’t attain the same results with others when he’s not in the parish, as he regretfully finds out when he fails to take away the emotional pain of a prostitute (Lindsey Roberts) who lives in his motel. What gives?

As every conscious creator knows, our employment of the process depends entirely on our beliefs, right down to all of their finest particulars. If Abe can heal others but not himself, then there must be something in his matrix of beliefs that’s preventing it. Perhaps he feels it’s something only meant for others. Or perhaps he somehow believes he’s unworthy of being the recipient of divine grace, no matter how impassioned he is in making his requests for God’s assistance. As long as such beliefs are place, he’ll be incapable of achieving for himself what he so readily attains with others. And, if he ever hopes to alter that outcome, then he must also change his beliefs. Considering how stubbornly those notions can persist, that may be easier said than done.

Despite this apparent contradiction in his outlook, it’s not unchangeable. In fact, many healers maintain that by healing others – as Abe so readily does – we work toward healing ourselves, a process that could take some time to fall into place. But, with a subject as problematic as Benny is, this endeavor could provide Abe with the opportunity he needs to break through the barrier of his belief limitations and move him toward reaching the goal he’s set for himself. And that’s been made possible because Abe used the conscious creation process – even if he wasn’t aware of it – to draw someone like Benny into his life.

A key point that conscious creators (Abe included) must realize is that our divine collaborator may bring us results that fulfill our intents but that don’t necessarily take the forms we expect, sometimes even leading us down difficult or perilous paths. However, when the outcomes are analyzed at bottom, we find that the materializations we experience fulfill the underlying intents behind what we asked for. In some ways, this could be the conscious creation equivalent of the notion that “the Lord works in mysterious ways.” To be sure, we might not recognize the innate significance of our manifestations at the time they appear, but, if we were to look at them closely, we just might find we get exactly what we ask for, at least conceptually speaking. As the Rolling Stones so aptly put it, “You can’t always get what you want, but if you try sometime you find, you get what you need.” 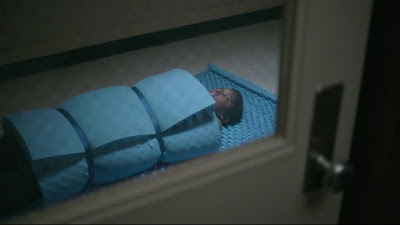 Benny (RaJay Chandler), an emotionally distressed preteen, undergoes a variety of treatments – from medical to spiritual – to alleviate his suffering in “Free in Deed.” Photo courtesy of Gravitas Ventures.

Virtually anyone who’s in pain – be it emotional, physical or circumstantial – wants to be free of the anguish, and that’s certainly the case with the parishioners Abe heals. But, given their situations, it’s also very much the case with Melva, Benny and the pastor. They each desperately seek to be released from their burdens, even if they’re not able to adequately express such feelings for themselves, as is the case with Abe’s young subject. They long to be, as the film’s title suggests, “free in deed.” The question, of course, is, will they achieve it? And, if they do, when it happens, will they recognize and accept their circumstances for what they are?

This ambitious, frequently heartwrenching tale of faith and the elusive search for understanding our relationship to the divine is, admittedly, sometimes difficult to watch. The film’s intensity is palpable, affecting viewers on a gut level, suggesting there’s more to this than just a story, that it’s a reflection of some intrinsic truth. While the film could have used some judicious editing to eliminate some narrative redundancies, this fact-based drama is otherwise gripping and engaging, with an excellent ensemble cast bringing the story to life, especially among the three principals. It’s particularly impressive that director Jake Mahaffy succeeded in pulling this all together on a shoestring budget.

This 2015 production has been somewhat slow in coming to the theatrical marketplace. It played at a number of film festivals throughout 2016 and has only recently gone into domestic release, but the wait has been worth it. Along the way, though, the picture received its share of accolades, including a number of awards. It earned considerable recognition in the Independent Spirit Awards competition, where it racked up nominations for best male lead, best supporting female, best cinematography and the contest’s John Cassavetes Award, which honors the best film made on a production budget of $500,000 or less.

The answers we seek in life aren’t always easy to come by, and, when they do, they often surprise us, taking us in unexpected directions. This is particularly true when it comes to matters involving the alleviation of suffering and our understanding of our relationship with our Creator. They often yield results that don’t necessarily match the form of our hopes but that nevertheless invariably embody their sought-after essence. Recognizing this may not be easy. However, when that happens, then we have a shot at real freedom.