‘Battle of the Sexes’ confronts and smashes barriers

Getting ahead in life can be fraught with obstacles that keep us from moving forward. But, no matter how formidable these limitations may appear, they’re all meant to be overcome, provided we believe in the possibility. That can be challenging, especially when the barriers appear on multiple fronts, but it’s by no means impossible, as demonstrated by the new sports biopic, “Battle of the Sexes.”

In September 1973, the nation’s attention (if not that of much of the world) was captivated with, of all things, a tennis match. But, in many ways, it was no ordinary tennis match; it was a contest with wide-ranging implications in the sports world and society at large – the Battle of the Sexes, featuring 55-year-old Bobby Riggs (Steve Carell) squaring off against 29-year-old Billie Jean King (Emma Stone).

With both players having won championships at Wimbledon, the U.S. Open and the French Open, the talent was considerable on both sides of the net. However, Riggs, as a self-avowed male chauvinist, embodied the opinion held by many of the professional tennis world’s movers and shakers that women couldn’t compete with men when it came to skill on the court. Tennis promoters and commentators like former pro Jack Kramer (Bill Pullman) contended that women weren’t as physically adept and, hence, not as interesting to watch. And this, they claimed, justified the smaller prizes paid to women in professional tournaments. So, when Riggs challenged King to a one-on-one match, she accepted if for no other reason than to prove him and his peers wrong. 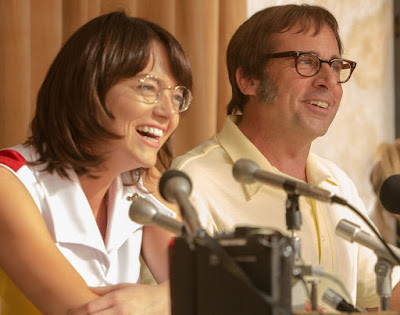 “Battle of the Sexes” chronicles the events leading up to the big match, both from personal and professional standpoints. These back story items are crucial to the narrative, for they explain some of the motivations of the characters and spotlight the significance of the main event, both in the tennis world and further afield.

For example, viewers witness Riggs’s struggle as a compulsive gambler, an addiction that frequently caused issues in his marriage to his wife, Priscilla (Elisabeth Shue), and that helped bring out the natural Barnum-esque huckster in him. Meanwhile, audiences are let in on King’s efforts to launch a professional women’s tennis tour – one free of the constraints dictated by the sport’s male-dominated hierarchy – with the assistance of Gladys Heldman (Sarah Silverman), founder of World Tennis Magazine, and sponsored by Virginia Slims cigarettes, one of the first brands of smokes specifically marketed to women. In addition, the film also examines King’s personal struggles in accepting her emerging homosexuality through her clandestine involvement with her lover and hairdresser, Marilyn Barnett (Andrea Riseborough), an incident that created tension in her marriage with her husband, Larry (Austin Stowell), and that sparked whispers among sponsors and fellow competitors, like Australian powerhouse Margaret Court (Jessica McNamee).

What’s more, the film also delves into the media spectacle that was the Battle of the Sexes, one of the first high-profile public events accorded such unrelenting hype and over-the-top promotion. In many ways, the match set the standard for similar events that would follow in the ensuing years – and that remain part of the media culture and fabric of society to this day.

Most importantly, though, the film is an exercise in illustrating what it means to rise to one’s own greatness, to push through barriers and limitations that hold us back, as well as those facing similar circumstances. This is certainly true in the professional arena, as evidenced by King’s efforts to level the playing field in the world of women’s sports (not just tennis), but also to promote wider social acceptance of alternate lifestyles. Clearly this was an event about more than just a tennis match. 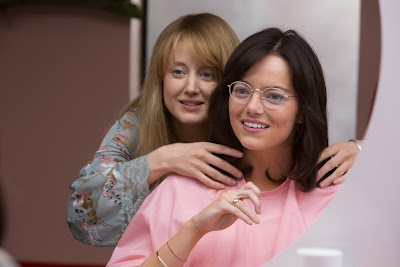 So how did the Battle of the Sexes grow to be as significant as it was? It comes down to the fact that everyone who had even a remote connection to the event wanted to see it succeed to promote their particular agendas – aims driven by their beliefs, the cornerstone of the conscious creation process, the means by which we manifest the reality we experience. These co-creations (or “mass events,” as many conscious creation advocates term them) embody many diverse elements and outlooks, each seeking materialization thanks to the belief power underlying them.

For champions of the old order, for example, the event had the belief energy of figures like Riggs and Kramer propelling it toward manifestation. By contrast, the new paradigm had the backing of King and all of her many followers, both in her personal and professional life, to catapult it to success. And, through it all, as noted earlier, the belief energy aimed at surpassing personal limitations was suffused throughout the event, both at the time of the match and in the incidents preceding it. 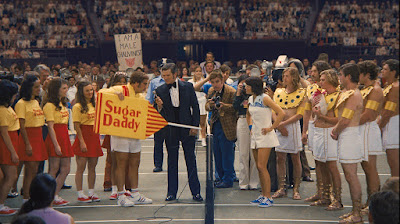 In many ways, the Battle of the Sexes served as a centerpiece event in the larger social changes that were taking place at the time. It served as a sort of lightning rod in which impassioned proponents on each side of the issues at stake sought to bring their hoped-for manifestations into being. The ceremony and spectacle associated with such considerations were created to draw the concerns in question into sharp focus for all to see – and to witness which side would come out the winner. And it ultimately demonstrated that, as conscious creators steadfastly maintain, we’re all in a constant state of becoming, ever evolving to something new. (Adherents of old, worn-out ideas, take note.)

Those of us who were around at the time these actual events played out will appreciate the authenticity of this well-crafted cinematic time capsule. “Battle of the Sexes” superbly re-creates one of the biggest sports and social spectacles in recent history, thanks to excellent performances by Stone and Carell – both of whom practically channel their characters – and masterful period piece production values that effectively capture the look and feel of its subject matter. Admittedly, the picture tends to drag slightly in the first 45 minutes, but, this shortcoming aside, the film otherwise delivers in every other regard. As directors Jonathan Dayton and Valerie Faris have demonstrated in such previous works as “Little Miss Sunshine” (2006) and “Ruby Sparks” (2012), they know how to pick good stories and tell them well on the big screen. Game, set, match.

When we set our sites on achieving a particular objective, it can be difficult to hold us back, especially if we’re hungry enough and back those passions with adequate belief support. However, if we waver in our enthusiasm and drive, or if we allow doubts or fears to creep into the mix, we can set ourselves up for disappointment. Yet, if we maintain our resolve and focus, there’s no telling what we can accomplish. Just ask Billie Jean King. 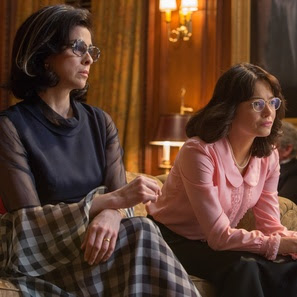