‘Christmas’ release tells a Dickens of a tale

It’s been said that helping others is the best way to help ourselves. We get back what we put out, and, if that turns out to be goodwill and generosity of spirit, then that’s what will return our way. So it was for a world-class author seeking to get his life and career back on track after a creative slump, as demonstrated in the heartwarming new holiday offering, “The Man Who Invented Christmas.”

Two years following the resounding success of his novel Oliver Twist, author Charles Dickens (Dan Stevens) was experiencing a dry spell, having produced three literary failures in a row. With his personal financial situation growing increasingly perilous, he desperately needed to get his career back on track. However, that was easier said than done, given that he was also suffering from a severe case of writer’s block. And, with his publisher breathing down his neck, the situation was growing ever more dire. What to do?

Just when all began to seem lost, however, Dickens came up with an idea for a new work – a Christmas novel with an uplifting message, tinged with elements of spirituality and the supernatural. His publisher was skeptical, unsure about the market for a holiday themed book. What’s more, given that it was already October, the chances of getting the book written, illustrated, printed and marketed in time for the big day seemed highly unlikely. But Dickens was confident that he could pull it off, and, when his publisher raised ever more skepticism, the author decided to go it alone (and who said self-publishing was a recent phenomenon?). 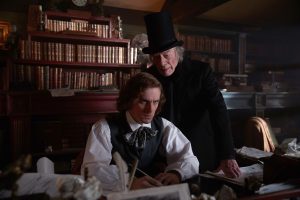 In an attempt to overcome a severe case of writer’s block, author Charles Dickens (Dan Stevens, foreground) consults with an apparition of the protagonist of his emerging new work, Ebenezer Scrooge (Christopher Plummer, background), in “The Man Who Invented Christmas.” Photo by Kerry Brown, courtesy of Bleecker Street Media.

Drawing upon an array of influences from his everyday life to memories from his past and, perhaps most importantly, his dreams and vivid imagination, Dickens gradually began to piece together his new work. The book would tell the story of a bitter, miserly old business man named Ebenezer Scrooge who would come to learn the meaning of Christmas by changing his ways and becoming eminently charitable when confronted by ghosts from his past, present and future. The writing particularly took off when Dickens began creatively interacting with an apparition of his book’s protagonist (Christopher Plummer), gaining insights into the character and how his story should play out. It was a collaboration that would eventually lead to the publication of one of Dickens’s most beloved and best-selling works, A Christmas Carol.

Dickens’s success in bringing his work to life – especially in such short order – and its remarkable sales performance – both at the time of the book’s release and ever since – shouldn’t come as any surprise, though, given that it was a reflection of the author and his beliefs. And those beliefs, as practitioners of the conscious creation process are well aware, provide the basis for manifesting the reality we experience, which was very much the case here.

To be sure, it’s highly unlikely that Dickens ever heard of conscious creation, yet his actions clearly reflect the philosophy’s principles, which are apparent in the resulting outcomes. For instance, Dickens strongly believed in philanthropy and magnanimity toward one’s fellow man, being charitable toward those less fortunate. This was an idea espoused in a number of his previous writings, drawing attention to the plight of the less fortunate at a time when such matters weren’t as easily publicized as they are today. 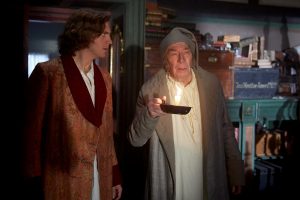 Paying attention to influences from his dreams helps author Charles Dickens (Dan Stevens, left) with inspiration for his latest work, especially when guided by an apparition of his book’s protagonist, Ebenezer Scrooge (Christopher Plummer, right), in the new holiday release, “The Man Who Invented Christmas.” Photo by Kerry Brown, courtesy of Bleecker Street Media.

What’s more, Dickens personally acted upon these notions, readily providing financial support to those in need, such as his father, John (Jonathan Pryce), for whom Charles purchased a home in the country in which his fiscally irresponsible dad and mother (Ger Ryan) could live. He thus set a personal example for others to follow (especially those who had the most to offer but who also may have been the most reluctant to give of themselves), demonstrating the value of such charitable acts, gestures that ultimately benefitted both the recipients of such generosity as well as to those who bestowed it upon them.

Given these beliefs and the results that flowed from them, then, it’s easy to see how Dickens could write about them so easily and passionately, both in his previous books and, especially, in the work that’s the subject of this film. He thus used his writing and his actions to make the case for a lesson that everyone could learn from, a message that’s just as relevant now as it was in 19th Century England.

Watching the writing process unfold – both in terms of crafting the story and preparing the finished book for public sale – reveals Dickens’s impressive ability to draw upon all of his creative resources to bring his project to life, again, accomplishments attributable to his beliefs. Even in the wake of his literary failures, for example, Dickens knew he could get back on track, especially when faced with a short window to produce his proposed new work. His fervent belief in his ability to marshal all of the necessary resources made it happen, an excellent illustration of how we can bring forth our conceptions from the realm of the intangible into physical existence. 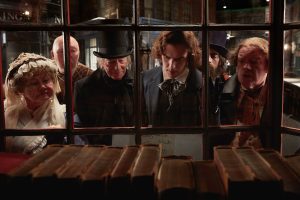 Considering the sources of Dickens’s inspiration, it’s also apparent that he knew how to pay attention to synchronicities, those seemingly perfectly tailored “coincidences” that help to point the way toward our destiny. By drawing from the experiences of his youth and listening to the captivating ghost tales told to his children by a young Irish immigrant housekeeper (Anna Murphy), for instance, Dickens picked up on the significance of these elements and the role they would come to play in the narrative of A Christmas Carol. His awareness of these influences thus fueled and reinforced the beliefs that drove the creative process that brought his finished work into being.

Paying attention to synchronicities is important, because it helps bolster our intuitive abilities, one of the chief contributing factors in belief formation. This aspect of belief formation is often woefully underutilized, mainly because it’s seen as less trustworthy than our intellect, the other driver of the process, which is generally viewed as more rational and, consequently, more reliable. However, just because our intuition is considered less logical doesn’t mean that it’s any less useful; in fact, as Dickens’s example alone shows, it’s positively essential to achieving our sought-after success. Indeed, think of all those who would not have benefitted from the uplifting message of A Christmas Carol if Dickens had not drawn upon his intuition in bringing his work to life.

In presenting the back story of this holiday classic, “The Man Who Invented Christmas” offers viewers a modestly entertaining look at how this work came into being. The film features fine performances by Stevens and, especially, Plummer, with both bringing their characters to life with convincing credibility and a great deal of wit. However, given the enduring charm of the book on which this film is based, truthfully I was expecting something a bit more “magical” out of this release, which, regrettably, comes across as surprisingly flat, with only periodic smatterings of wonder. To its credit, the picture does an excellent job of showing how we can draw inspiration from our surroundings and experience to produce amazing works of creativity, and it effectively reinforces the message of benevolence of A Christmas Carol. But, overall, the film is somewhat more pedestrian than whimsically serendipitous, which I found a little disappointing. In short, as holiday movies go, this one isn’t bad; it’s just not great. 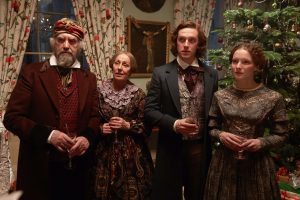 Nevertheless, despite the picture’s shortcomings, it still conveys the message of goodness that Dickens sought to express through his life and work. And, given the state of the world these days, that’s something all of us can probably never be reminded of enough.