Skip to content
Home/Conscious Creation, Drama, Movie Reviews/‘Darkest Hour’ inspires us to rise to our own greatness

‘Darkest Hour’ inspires us to rise to our own greatness

Sometimes it takes having our backs against the wall to realize the greatness of which we’re truly capable. Getting there may seem like a dire process, and we may be ready to break down or give it all up if hope appears lost. Such dark night of the soul moments test us to the limit but also show us exactly what we’re made of, a scenario pointedly depicted in the new, fact-based historical drama, “Darkest Hour.”

At the outset of World War II, the British government sought to minimize its involvement and the potential for bloodshed by practicing a policy of appeasement put forth by Prime Minister Neville Chamberlain (Ronald Pickup). By bending to the demands of German Chancellor Adolf Hitler, the U.K. hoped it could curtail the rising tide of warfare. However, when it became apparent the Fűhrer had no intention of honoring his agreements, the need for a new strategy – and a new British P.M. – became all too clear.

But, British politics being what they were at the time, there was also a need to establish a coalition government, one that ultimately was headed by an unlikely leader – Winston Churchill (Gary Oldman), an aging statesman in whom many politicians and even the Crown had little confidence. His track record of past failures haunted him, and many saw him as a buffoon and a catastrophe waiting to happen. Nevertheless, despite these issues, Churchill managed to rise to the top and was asked to form a government by King George VI (Ben Mendelsohn), albeit quite reluctantly. 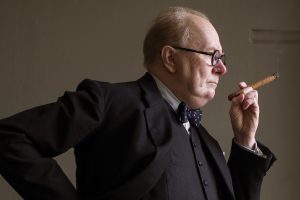 British Prime Minister Winston Churchill (Gary Oldman) assumes the reins of power at one of the most critical junctures in the nation’s history as depicted in the new, fact-based historical drama, “Darkest Hour.” Photo by Jack English, courtesy of Focus Features.

Once Churchill assumed the reins, he was quickly faced by a severe wartime crisis – the surrounding of British forces by German troops at the French seaport of Dunkirk. With virtually the entire British military in serious peril and the Germans overrunning Europe with no opposition, Churchill faced the collapse of Allied forces and a potential massacre of its own trapped troops. He was thus thrust into devising a plan – any plan – to stave off these twin tragedies.

At the same time, Churchill was being pressured by his own War Cabinet to enter into peace talks with the Germans, to be brokered by Hitler’s Italian allies. This option, advanced by Churchill’s political rivals, most notably Viscount Halifax (Stephen Dillane), would theoretically end the carnage but would essentially turn the U.K. into a fascist lap dog. Conversely, it was believed that rejection of this initiative would ensure British failure in dealing with the crisis on the French coast. And, the more this scenario was allowed to play out, the more Churchill was being railroaded into a position of being labeled a collaborator or an incompetent, either of which would provide grounds for his ouster.

Churchill didn’t always help his own case, either. He was known for his prolific, unabashed imbibing, and he frequently spoke his mind, even when candor wasn’t called for. He even shocked many would-be supporters with his famous (or some would say infamous) “V for Victory” hand gesture, which, in some segments of society, was taken to mean something entirely different (and not especially socially acceptable). However, this unrestrained, freewheeling approach to life also gave him a strong sense of self-confidence, one that would prove to be a saving grace. 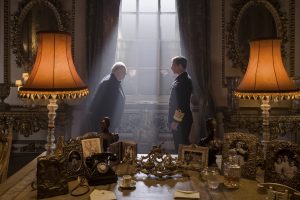 No matter what he was up against, Churchill staunchly believed that Britain had to remain firm in its resolve, convinced that the fate of Western civilization was at stake. However, given the pressures he faced, he was also on the verge of cracking. To be sure, he had devoted supporters in his corner, such as his beloved wife Clementine (Kristin Scott Thomas) and loyal secretary Elizabeth Layton (Lily James), but, in seeking solutions to his challenges, he was virtually alone. If he were to survive this crisis, he would have to get creative, both in coming up with plans of action and winning over supporters, which, in each case, would prove to be the people who would come to help him most – the British citizenry.

Churchill’s amazing saga at the start of World War II is a prime example of someone rising to his own greatness, exceeding his potential at a time when the odds were overwhelmingly stacked against him. This inspiring tale shows what we’re each capable of, even in the face of seemingly insurmountable challenges. It shows what it means to surpass everything we thought we could do – and thrive in the process. And that success is largely attributable to the conscious creation process, the means by which we manifest the reality we experience through the power of our thoughts, beliefs and intents.

It’s a pretty safe bet that Churchill probably never heard of conscious creation, yet, based on his actions as depicted in this film, it’s apparent he was quite adept in wielding it. For instance, to solve the problems he faced, he was forced into getting creative, thinking outside the box, pushing limitations, conceiving inventive plans and coming up with manifestation beliefs that had never been tried or perhaps even thought of. This became obvious in his solution for evacuating British troops from Dunkirk when they were penned in by the Germans. Because Britain’s large military rescue ships were unable to land at the French port because of relentless enemy air cover that made them sitting ducks, Churchill had to devise a workable alternative to effect the evacuation. His solution was to put out a call for a citizen armada, a plea to British citizens to deploy their own vessels – fishing boats, pleasure craft, etc. – in a ragtag but concerted effort to bring the boys home. It was a plan no one saw coming – including the Germans – and it had a huge impact on the country’s ability to remain viable in a conflict in which it was becoming increasingly involved. 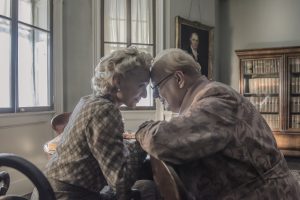 Such creativity was essential for Churchill to maintain his political stance as well. With the opposition breathing down his neck and with lukewarm support from the Crown, there were many times when the P.M. felt completely alone. To counter these measures, he needed to win over supporters to ensure his continuation in office, namely, the British public and wavering members of Parliament. Through his stunning oratory, impassioned pleas and interaction with the citizenry – acts that he had not previously engaged in or was especially proficient at – he made a case for his beliefs, which subsequently turned into manifested results, particularly when it came to rallying others behind his cause.

To make these plans work, though, Churchill also had to draw upon several key conscious creation principles. For example, he had to overcome any fears or apprehensions he might have had, something that seldom tripped him up but that became progressively more arduous as the pressure placed on him from multiple fronts continued to mount. He had to be willing to take bold moves, particularly when it came to speaking his mind to his political opponents, the monarchy and the public at large. This took tremendous courage at a time when so many doubted him, but he successfully managed to maintain his resolve, unshakable in his faith in his beliefs, the need to adhere to them and the urgency of getting others behind them – especially with the fate of a nation at stake. 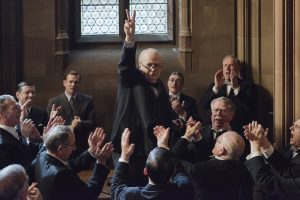 Even in the face of opposition from his fellow legislators, British Prime Minister Winston Churchill (Gary Oldman, center) rallies support for his agenda in “Darkest Hour.” Photo by Jack English, courtesy of Focus Features.

What’s more, Churchill had to realize he was not alone in this crisis, even though it may have felt that way at times. True, he had allies in his corner, such as his wife and secretary, but he needed to curry support from a broader base. And, to do that, he had to ask for that assistance, making a case for his position and tapping into our inherent connectedness to draw upon the power of co-creation. By doing so, he was able to engender the aid of collaborators to help him materialize the outcomes he sought. It proved to be an effort that a grateful England and Europe would come to appreciate and implement. Had it not transpired that way, we’d likely be facing a world with a very different look today.

Oldman’s stellar portrayal of the legendary leader is handily the greatest strength of this biopic, an effort that has earned him best actor nominations in the Golden Globe, Screen Actors Guild and Critics Choice Award competitions. However, despite the outstanding performance by the protagonist and several of the picture’s supporting players, the overall product is at times a little too talky and drawn out to captivate, given that it’s based on an epic story that truly should engross viewers. With a little too much emphasis on British domestic politics, the film sometimes becomes bogged down and, frankly, a bit boring. Still, despite this shortcoming, “Darkest Hour” has been well-received by critics, as evidenced by the three additional Critics Choice Award nominations that it has captured, including best feature. 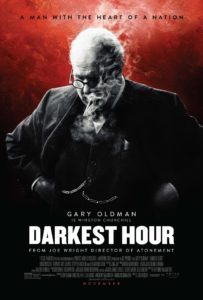 Icons deservedly attain the status they achieve as a result of their Herculean efforts. And, based on what’s depicted here, it’s easy to see how Churchill earned such standing. His experience sets an example we can all follow when we find our own backs up against the wall. We just might come away from such experiences finding ourselves rising to our own greatness – and beyond.