‘I, Tonya’ reveals the dual-edged sword of ambition

Being the best at what we do is something to which many of us aspire. With great heart, tremendous determination, a plucky attitude and our own brand of innovation, we forge ahead as we strive to surmount that pinnacle of success. But is it possible for those efforts to be excessive or get out of hand? Under conditions like that, our aims may become skewed, perhaps even turning counterproductive, no matter how ardent our passion or how steely our resolve. Such is the case in the new, fact-based dark comedy, “I, Tonya.”

Told largely through a skillfully edited mix of insightful monologues and revelatory flashbacks, the film tells the often-comic, satirically tragic biography of figure skater Tonya Harding (Margot Robbie), who attained a number of accomplishments on the ice but is perhaps best known for an explosive off-rink scandal that fueled tabloid headlines for months.

The ups and downs of figure skater Tonya Harding (Margot Robbie) spin a compelling story as detailed in the new, fact-based biopic, “I, Tonya.” Photo courtesy of Neon and 30West.

Beginning in childhood, the picture follows the life of a young Tonya (Maizie Smith, Mckenna Grace) as she hones her talents under the skillful training of coach Diane Rawlinson (Julianne Nicholson). But, in stark contrast to the artistry Tonya was developing on the ice, the emerging star also had to contend with the harsh conditions of her home life, circumstances characterized by financial strife and incessant physical and verbal abuse. She was constantly under the thumb of her beastly, controlling mother, LaVona (Allison Janney), a snarly, foul-mouthed, embittered waitress who routinely pummeled and chastised Tonya for the slightest of infractions when not embroiled in expletive-laden quarrels with her husband (Jason Davis).

Given her hard life off the ice, Tonya developed a somewhat thick skin and something of an edge, qualities that became reflected in her skating. While many of Tonya’s peers aspired to live up to the stereotypical ultra-feminine attributes long associated with the sport, she developed her own style, one characterized by skating programs set to heavy metal music and costuming punctuated by blue nail polish. She also exhibited a greater athleticism than many of her competitors. But, while these innovations set her apart, they failed to impress competition judges, most of whom were looking for a more traditional presentation, one characterized by more conventional (i.e., more demure) qualities. Such displeasure was reflected in the scores Tonya earned in competition (despite the technical strength of her performances), which, in turn, would invariably bring out LaVona’s wrath, generally prompting severe verbal onslaughts (if not more).

To cope, Tonya sought out the company of those whom she hoped would treat her decently, such as her boyfriend, Jeff Gillooly (Sebastian Stan), a handsome if somewhat doltish sort who claimed to adore her but ultimately engaged in abusive behavior equal to that of LaVona. Still, despite such shoddy treatment, Tonya took refuge in Jeff’s home when life with her mother became unbearable, a move that was tantamount to jumping from the frying pan into the proverbial fire.

Meanwhile, on the ice, Tonya sought to find new ways to distinguish herself, a move aimed at leveling the playing field and silencing the small-minded critics who claimed she didn’t play the princess role well enough. She decided to make an attempt at being the first woman to land a triple axel jump in competition, an exceedingly difficult program element involving three-and-a-half revolutions. If she were to perform it successfully, that would surely make her a stand-out – and shut up the naysayers – an accomplishment attained at the 1991 U.S. Figure Skating Championship, where Tonya emerged the winner.

With her grand achievement behind her, Tonya suddenly became skating’s “it” girl, despite her less-than-conventional style. She was now being touted as a hot contender for the 1992 Olympics in Albertville, France. But, given a disappointing performance at the Winter Games and too many domestic distractions off the ice, she seemed to have missed her chance. This, coupled with allowing herself to fall out of shape, she quickly seemed to become a skating has-been at the age of 21. However, with a shortened two-year time frame before the next Olympics in Lillehammer, Norway and the encouragement of coach Rawlinson, Tonya was talked into making a run at the 1994 Winter Games.

There was just one problem: Tonya would have to contend with the competition posed by skater Nancy Kerrigan (Caitlin Carver), whose star was quickly rising after earning a bronze medal at the Albertville Games. Ironically, the two were actually fast friends, but, when it came to competition, those bonds would vanish, with relations between them becoming strained. And, in the months ahead, Tonya would find that “strain” wouldn’t even begin to describe what was about to go down.

LaVona Golden (Allison Janney), the beastly, overbearing mother of figure skater Tonya Harding, seeks to control every aspect of her daughter’s life in the dark new biopic, “I, Tonya.” Photo courtesy of Neon and 30West.

What happened next stunned the skating community and the world at large when Kerrigan was brutally attacked after finishing practice before the U.S. nationals in Detroit. An assailant surprised her off the ice, clubbing her with a baton just above the knee. That assailant would turn out to be Shane Stant (Ricky Russert), an attacker hired by Gillooly and Shawn Eckhardt (Paul Walter Hauser), Tonya’s inept, dimwitted bodyguard, who delusionally fancied himself a covert spy master and intelligence operative. The plan called for Stant to break Kerrigan’s leg to keep her from competing in Lillehammer, but, as events played out, she suffered only a severe bruise, one that would heal up in time for the Winter Games.

With Kerrigan sidelined, Harding won the U.S. Championship and a spot on the Olympic squad. However, despite this victory, her star was tainted as rumors began to circulate. Even though Tonya claimed to have no knowledge of the scheme, the event nevertheless stuck to her like glue thanks to guilt by association, quickly leading to the launch of an FBI investigation. And the firestorm set off by the attack and its fallout would occupy headlines for a long time afterward, with consequences that followed the fallen star for years after stepping off the ice.

Almost no one would criticize someone for having ambition, but, when such drive turns a blind eye to everything that could potentially accompany it, we run the risk of setting ourselves up for major trouble. Such supremely singularly focused aspirations, like anything else that materializes in our lives, are a product of our thoughts, beliefs and intents, the cornerstones of the conscious creation process, the means that makes these manifestations possible. And, in true conscious creation fashion, those materializations always arise from those fundamental building blocks, no matter what they may be – warts and all.

In Tonya’s case, it’s easy to make the case that her ambition beliefs were tinged by intents aimed at succeeding at almost any cost. Given her troubled upbringing, marriage and competition experience, Harding’s desire for recognition and acceptance could well have been a powerful motivation, adding fuel to the skater’s drive for success. But that belief mix can easily become a volatile combination, particularly if one pays no heed to the potential fallout, especially if that involves turning a blind eye to the efforts of others supposedly acting on our behalf.

Figure skating coach Diane Rawlinson (Julianne Nicholson, left) watches her star pupil, Tonya Harding, during one of her performances in the compelling new biopic, “I, Tonya.” Photo courtesy of Neon and 30West.

While it’s entirely possible that Harding never heard of conscious creation, it’s apparent from her successes that she nevertheless had developed a certain mastery over its principles. However, given how other events unfolded, it’s also apparent that she could fall victim to the process of un-conscious creation or creation by default, whereby we become so obsessed with achieving our objectives that we may disregard the consequences associated with them, especially if we give them no attention.

Of course, if Tonya’s drive for recognition and acceptance was an outgrowth of her background, one might wonder why she drew those circumstances into her life in the first place, especially since conscious creation makes an infinite range of options available to us at any given moment. That’s a legitimate contention, but, as any seasoned conscious creator knows, the conditions we manifest for ourselves are rooted in our own reasons, usually based on our need to tackle specific life lessons. How we address those lessons is part of our ongoing personal growth and development, and we again have limitless options for response to them, some of which may turn out more successfully than others. Tonya’s responses naturally reflect the beliefs she held at the time, which, like those of any conscious creator, are thought to be the wisest course to follow at the moment.

Had the underlying beliefs been different, the outcomes would have obviously been different, too. But, circumstances being what they were (i.e., given what had been created in the first place), results arose in line with the beliefs at play in this scenario. That being the case, then, Tonya’s experience provides audiences with a strong cautionary tale about how to wield our personal power of creation. Treading carefully would indeed appear to be in order. 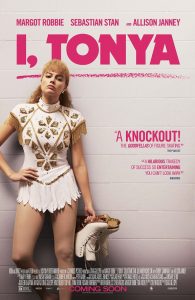 Handily one of the year’s best, “I, Tonya” seethes with its richly macabre humor, which relentlessly comes at viewers in a variety of forms, be it through the characters’ monologues, the actions taking place on screen or the players’ snarky asides delivered directly to the audience in the midst of the mayhem playing out around them. The film features superb performances across the board, especially Robbie and Janney in award-worthy performances. With a kick-ass soundtrack, impeccable editing, excellent writing and a spot-on narrative, the film carries the day in virtually every regard. To be sure, sensitive viewers may be offended by some of the language and violence, but both are properly balanced and in context. If you like your comedies with an edge, rush to see this one.

Aiming for the stars is undoubtedly a laudable goal, one that can help us see – and realize – our potential. But, in the process, we need to keep our eyes open during the course of our ascent, looking around us to determine that we’re on the right path and don’t draw undue problems to us along the way. Should we do so, we’re likely to nab our own gold medals as a result, honors that we genuinely earn – and needn’t worry about ever becoming tarnished.