‘Black Panther’ urges us to follow our own destiny

Can a good man truly lead without being corrupted by the power that comes with it? History is certainly replete with plenty of examples to the contrary, and, in an age where widespread greed and self-serving attitudes sometimes seem ubiquitous, the question takes on added significance. That’s why it’s so important to have role models who seek to live up to that ideal, an example of which provides a central theme in the new action-adventure, “Black Panther.”

In the latest offering from Marvel Studios, audiences witness the adventures of T’Challa (Chadwick Boseman), king of the mythical African nation of Wakanda, a technologically advanced society shrouded from the outside world, a kind of high-tech Shangri-La. When T’Challa unexpectedly assumes the throne after the untimely assassination of his father, T’Chaka (John Kani), the young monarch must grow up fast. But, as an idealistic leader, he willingly takes on the challenge, daunting though it may be. 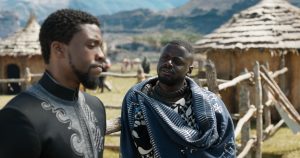 One of the biggest issues T’Challa must tackle is his country’s isolation and its longstanding unwillingness to share the resources and technology that have made it such a paradise. Should he continue this policy, one based on fears of what the outside world might do with the things that have made his homeland great? Or is it time for a change?

These are questions that T’Challa doesn’t get much time to ponder, though, as outsiders soon force his hand. Nefarious foes, like arms dealer Ulysses Klaue (Andy Serkis) and former black ops soldier Erik “Killmonger” Stevens (Michael B. Jordan), seek to plunder and exploit Wakanda’s resources and use its technology to help an alliance of underprivileged countries rise up and assume power over the planet as a unified force. And the only one standing in their way is the noble monarch and his alter ego, the Black Panther, aided and supported by his onetime romantic interest, Nakia (Lupita Nyong’o), his loyal military aide, Okoye (Danai Gurira), his tech whiz sister, Shuri (Letitia Wright), his courageous, resourceful mother, Ramonda (Angela Bassett), and an old acquaintance, CIA agent Everett Ross (Martin Freeman).

As events play out, complications develop, making the job of T’Challa/the Black Panther ever more difficult. The forces he takes on grow increasingly powerful, especially once they get their hands on the keys to the kingdom. He even has cause to question the loyalty of friends, such as his longtime confidante W’Kabi (Daniel Kaluuya). It’s also disheartening for T’Challa to discover that the roots of these current issues partly stem from mistakes made in the past by those near and dear to him, errors in judgment that spawned personal ill will, as well as the seeds of the kingdom’s present-day troubles. The young leader learns what it means to grow up and into one’s power more quickly than expected – and, in doing so, to tap into one’s own sense of right and wrong, a sensibility of his own making and not necessarily based on the lessons imparted to him during his grooming for the throne. His odyssey truly becomes one of finding out whether it’s indeed possible for a good man to rule justly and effectively. 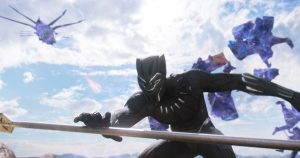 How well T’Challa succeeds depends on his beliefs, the cornerstone of the conscious creation process, the means by which he manifests the reality he experiences. To find his own greatness, he must find his own path, embracing those beliefs that reflect his true self, those that enable him to tap into his personal integrity, and those that allow him to express his own sense of value fulfillment, the principle associated with being our best selves for the benefit of ourselves and those around us.

This is important, for, if T’Challa were to strictly adhere to the beliefs he was raised with, his effectiveness could be compromised, as those notions might not fully or adequately align with his intents and values. Yet brushing aside those beliefs could prove difficult, especially if they were imparted to him by those whom he believed were utterly trustworthy or innately infallible. Such acts could be seen as a personal betrayal, even if he knew there were aspects of those teachings that were somehow incomplete, inadequate or flawed. 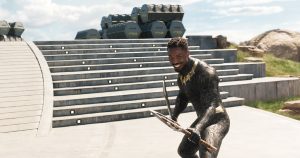 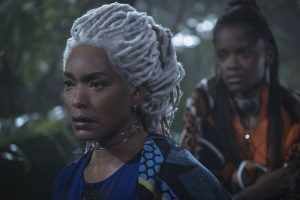 This is where learning how to practice discernment and to overcome our personal fears is crucial. Being sufficiently circumspect and courageous to determine and follow our own intents – even if they go against what we were taught to believe – can prove to be vital in attaining our goals, especially where the stakes are high and the well-being of others is in jeopardy. These are qualities that T’Challa and the Black Panther must embrace to succeed in their endeavors. After all, the fate of a nation – indeed, that of the entire world – hang in the balance and depend on the good king’s ability to live out his values, not to mention his destiny.

These sentiments, coupled with the inherently noble attributes typically accorded a superhero, provide the basis for the central narrative in “Black Panther.” However, the film’s excessive earnestness and the protagonist’s nearly complete lack of any character flaws at times lead to a story that begins to border on implausibility. What’s more, as much as I’ve admired Boseman’s stellar performances in pictures like “Get on Up” (as soul singer James Brown, 2014) and “42” (as baseball great and civil rights activist Jackie Robinson, 2013), he seems somewhat miscast here, coming across as one of the blandest superheroes I’ve ever seen on screen. In fact, when you find yourself more drawn to a villain like Jordan’s Killmonger, that speaks volumes about the ineffectiveness of the casting. Of course, it probably doesn’t help that the protagonist and the rest of the cast have to work with a script full of cookie cutter predictability and an insufficient back story for T’Challa’s alter ego, not to mention an array of generally underwhelming special effects.

Still, despite these flaws, the film does have some inspiring ideas to offer, such as those illustrating our intrinsic connectedness and our need to work together as a species if we hope to have a future. It also features an array of fine supporting performances, such as those turned in by Jordan, Serkis, Nyong’o, Wright and Bassett. Nevertheless, though, for a movie that’s been drawing raves, I expected a lot more than what it actually delivers. 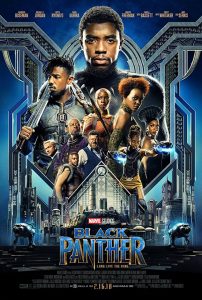 In the end, though, we come back to the question raised at the top. Is it possible to successfully maneuver the minefield of perils that await those who attempt to traverse such a difficult path? Tune in to find out.