‘Annihilation’ challenges our notions of existence

Many of us probably like to believe that we have reality all figured out, that we know how it works and how the process of its unfolding takes place. But do we? Are we sure that the rules we believe apply are true across the board, in all situations and permutations? And what happens if something comes along that challenges those seemingly rock-solid assumptions? How do we explain these anomalies? What’s more, can we cope with such puzzling, unexplained phenomena, particularly if they significantly differ from our established worldview? Those are among the considerations raised in the gripping new sci-fi saga, “Annihilation.”

When something unknown and otherworldly crashes into a lighthouse in a remote state park, conditions in the surrounding environment begin to change drastically. A phenomenon that comes to be known as “the Shimmer” encompasses the area, and, by all accounts, it appears to be slowly growing, consuming everything nearby. Bounded by an energy field characterized by an ethereal, rainbow-like glow, the Shimmer is a genuine enigma, one that top-secret government investigators desperately want to understand – before it’s too late. 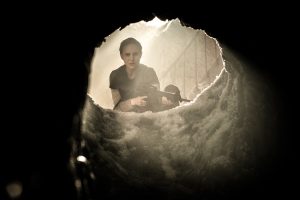 To get a handle on the nature of the phenomenon, the investigators establish a research facility known as Area X on the Shimmer’s perimeter. But, because the Shimmer distorts the operation of their monitoring equipment, they’re unable to obtain any meaningful readings about how it functions or what’s going on inside it. Thus the only way to find out about it is to send special ops military reconnaissance teams inside to gather data. The problem with that, however, is that all the teams that go in never come back.

Circumstances change, however, when something unexpected happens – one of the team members from the most recent expedition, Sgt. Kane (Oscar Isaac), mysteriously returns after a year’s absence, long past the time when he was presumed missing and dead. Kane is now different, though, seemingly disoriented and suffering from memory loss, not only of his time inside the Shimmer but also about much of his life before he left on his mission. This proves seriously disturbing to his wife, Lena (Natalie Portman), a former soldier turned biologist, who’s stunned by his return and can’t fathom his current state of mind. But, then, that’s not entirely surprising, given that she knew nothing of the nature of his mission before he departed. Nevertheless, she would still like answers about his disappearance and how he came to be how he is now.

Lena has little time to get her answers, though, since Kane quickly falls seriously ill, hemorrhaging severely. She contacts paramedics, who rush him off to the hospital. But, along the way, the ambulance encounters a convoy of black SUVs that force it off the road. Kane and Lena are forcibly removed and whisked away to an unknown location.

Upon awakening from an apparent involuntary sedation, Lena finds herself in Area X. She’s met and questioned by a cryptic psychologist, Dr. Ventress (Jennifer Jason Leigh), who asks Lena about her husband, the circumstances of his return and his confused state of mind, but she’s unable to offer much in the way of insight. And so, with that, the mysterious doctor decides to inform Lena where she is, showing her the unexplained phenomenon that looms just beyond Area X’s perimeter. 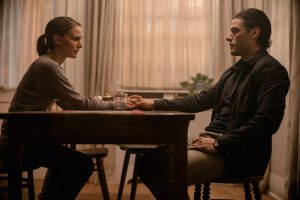 After seeing the Shimmer, Lena is captivated, despite the disappearance of virtually all members of the previous expedition teams. Ventress says that she and her colleagues believe the mission specialists were either killed or went mad and killed themselves, a circumstance that makes Kane’s return that much more mystifying. Ventress also reveals that she’s organizing a new team to enter and explore the luminous spectacle, one this time made up entirely of scientists, including herself, anthropologist Cass Sheppard (Tuva Novotny), physicist Josie Radek (Tessa Thompson) and paramedic Anya Thorensen (Gina Rodriguez). Given her expertise in biology and her vested interest in understanding her husband’s mysterious disappearance and return, Lena asks if she can join the team, to which Ventress readily agrees.

Within days, the team embarks on its journey into the Shimmer – and the vast unknown. What they find defies virtually everything they know about science and the nature of existence, presenting them with an even bigger puzzle than anything they’ve encountered up to that point. To say more would reveal too much about the mystery of the Shimmer and what it represents, but suffice it to say that the discoveries that come out of the expedition will turn all of our theories about evolution, physics and even metaphysics upside down and inside out, presenting an entirely new way of looking at the nature of existence. The boundaries between science and spirituality will become blurred – and fused – in utterly remarkable ways, providing stunningly brilliant and insightful revelations about what actually constitutes creation – and annihilation – and what it means to experience them firsthand.

As physical beings, we generally like to think we’re pretty sure-footed in our convictions and understanding of how our existence comes into being and functions. We also tend to think that this is how reality operates everywhere, that the rules that determine things here are as applicable in Peoria as they are on Saturn and in galaxies far, far away. So it’s not surprising that we might become utterly disoriented if we find evidence to the contrary, especially if it involves rules that we can’t fathom. Such is the case with the Shimmer.

Why is this so? In many ways, this comes about as a result of the functioning of the conscious creation process, the philosophy that maintains we manifest the reality we experience as a consequence of the power of our thoughts, beliefs and intents. The existence with which we interact originates from those beliefs, and the seeming consistency of its operation results from beliefs that compel such an outcome.

However, given that conscious creation maintains we have an infinite number of possibilities for existence available to us at any given moment, based on the underlying manifesting beliefs involved, there’s an equally infinite number of possibilities for how our reality can unfold. We’re accustomed to the existence we’re most familiar with, because it’s based on the set of intents with which we’ve become most comfortable – so much so, in fact, that we’ve generally come to believe that it’s the only game in the Universe. But, as this story so aptly illustrates, that’s not so. 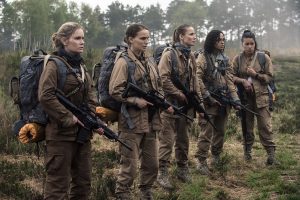 Ironically, as self-assured as we’ve become with this supposedly unshakeable understanding of the nature of existence, we often don’t have as astute an awareness of the manifesting beliefs as we believe we do. In fact, many of us are now just beginning to grasp the notion that our beliefs have anything to do with the materialization of our reality, let alone what those specific manifesting beliefs are. So it stands to reason that we’d naturally become perplexed when our reality doesn’t “behave” as we think it should.

Imagine, for example, what it might be like to suddenly find ourselves in a reality where our thoughts transform into tangible expressions of existence on demand and without hindrance. Given that most of us are unaccustomed to such phenomena – largely because we’re either unaware of the beliefs that drive our existence or because our beliefs consist of entangled amalgamations of ideas and intents that sometimes contradict one another and negate or distort the materializations that result from them – we might easily freak out if we were to have an experience that runs counter to what we’re typically accustomed to. The disorientation resulting from such an experience could be overwhelming. Yet, based on how conscious creation works, there is a bona fide possibility out there where an existence that functions on the foregoing basis indeed exists, even if we’ve never experienced it before or are unable to envision how it might come into being.

Moreover, it may also be disorienting if we were to suddenly find ourselves in an existence where elements familiar and comfortable to us are replaced with new and different manifestations – including some that would fly in the face of logic or “common knowledge” – seemingly at the drop of a hat. This notion thus aptly reflects the conscious creation concept that we’re all in a constant state of becoming, that everything is continually evolving. It also makes clear that there’s often an element of destruction – or “annihilation” – in any act of creation, no matter how counterintuitive that notion might seem. The occurrence of such materializations could easily leave us confused, wondering how they came into being, especially among those of us who are unaware of or unfamiliar with the conscious creation process and the means that make it work. Yet, again, outcomes that embody these principles are wholly feasible, even if they’re foreign to us.

As the expedition team makes its way through the Shimmer, hints at such ideas begin to appear. In addition, there’s evidence of other profound phenomena, such as the re-emergence of the divine feminine in the world, the theory of panspermia, and the inherent harmony between science and spirituality, not to mention a host of other elements reflecting principles found in Buddhism, Christianity and New Age thought, to name but a few. All told, it’s a lot to take in for the mission specialists, especially among the team members – all scientists – who likely aren’t well schooled in such lofty metaphysical and spiritual notions, all of which helps to explain why the elusive nature of the Shimmer is so difficult to understand. But making the effort to do so is important, both for the reality in which we find ourselves and for any into which we may someday move. 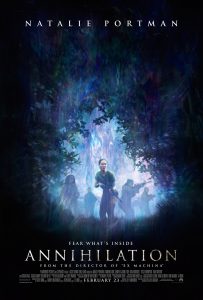 “Annihilation” is a mind-blowing, sophisticated sci-fi tale masterfully brought to the screen by director Alex Garland, who has upped his game considerably here, even outstripping the success of his previous work, “Ex Machina” (2014). The film’s richly layered, deftly nuanced script, combined with gorgeous cinematography and an inventive production design, make for riveting viewing. Note, however, that this is not a picture to be watched casually or when easily distracted. An attentive screening is sure to reward viewers, providing endless captivation and much to think about in the film’s wake, possibly forever changing one’s views on the heady subjects it so eloquently addresses.

As wondrous as we already believe existence to be, it has the potential to be far more astounding than we can possibly imagine, and “Annihilation” skillfully opens the door to give us but a mere glimpse of what’s potentially in store. Admittedly some may find these notions somewhat jarring or upsetting, but, for those who appreciate and willingly embrace the opportunity to expand their consciousness, this film provides the means to adopt a glorious – and entirely new – worldview.