Skip to content
Home/Conscious Creation, Documentary, Movie Reviews/‘RBG’ offers hope, reason to a world desperately in need of it

‘RBG’ offers hope, reason to a world desperately in need of it

Those on the outside looking in – and seeking the rights freely accorded those on the inside – need advocates to argue their case. Taking on such tasks can indeed be an uphill battle, too. But, with a well-reasoned strategy, patience, and a calm, clear voice, breakthroughs are possible, as many have discovered over the past half century, thanks in large part to the efforts of a remarkable woman, the subject of the new documentary feature, “RBG.” 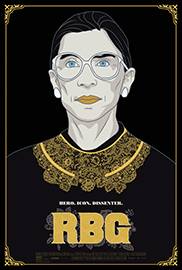 Since 1980, Ruth Bader Ginsburg (“RBG”) has left quite a mark on the U.S. judicial landscape, first in the U.S. Court of Appeals for the District of Columbia Circuit and then in the U.S. Supreme Court. In that time, she has played a pivotal role in joining the majority on a number of key decisions, as well as in penning numerous blistering dissents as part of a vocal minority. But what’s less known is the role that she undertook as a lawyer in the time leading up to her appointments to the bench, a period in which she quietly but significantly reshaped many aspects of everyday life for those seeking equal rights.

Based on the victories of the civil rights movement of the 1960s, RBG employed a similar approach in tackling the women’s rights issues of the 1970s. Having acted as a self-described “kindergarten teacher” to a judicial bench occupied by an all-male, largely white panel of Supreme Court justices, Ginsburg methodically and lucidly drew attention to the inherent discrimination against women in such areas as equal pay and benefits, frequently invoking the Equal Protection Clause of the U.S. Constitution. She used the term “kindergarten teacher” to describe her role in this effort, because she believed that she was providing the justices with a basic education into the existence of institutional (and often legally sanctioned) gender-based discrimination, an issue of which they had little to no awareness. Through measured, carefully delivered arguments in a number of cases, Ginsburg showed the oblivious justices what it meant to be on the short end of the stick. 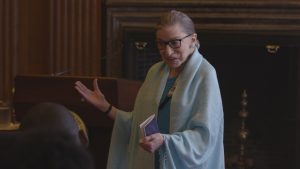 In one of her many public appearances, U.S. Supreme Court Associate Justice Ruth Bader Ginsburg speaks to students about the importance of understanding and upholding the U.S. Constitution, as depicted in the engaging new documentary feature, “RBG.” Photo courtesy of Magnolia Pictures.

What’s more, to avoid being labeled a partisan feminist, RBG employed a fair, balanced approach to fulfilling her objective, not only in terms of the nature of her arguments, but also in terms of the types of cases she took on. In one suit, for instance, she represented a widower who was denied Social Security survivor benefits simply because he was a man, something to which widows were unreservedly entitled to upon the deaths of their husbands. By taking on this case, she demonstrated that fairness is fairness, regardless of gender, a core element of her approach in seeking equal rights for everyone, no matter what their sex.

Ginsburg’s success in these cases came about in large part from the lessons of her upbringing. Having been raised by a mother who taught her not to shout to make her point, RBG employed this strategy in her court arguments. As seen by her five wins in six cases before the Supreme Court, the approach obviously worked.

Ginsburg also believed in achieving results one step at a time – slow, steady progress made incrementally toward the ultimate goal. She learned this from observing the victories in the civil rights movement and believed that the same tactic would work in securing equal rights for women. Based on her track record in legal wins, as well as her subsequent court appointments, it would seem this strategy worked as well, too. 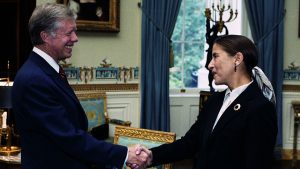 In 1980, lawyer Ruth Bader Ginsburg (right) accepts her appointment to the U.S. Court of Appeals for the District of Columbia Circuit by President Jimmy Carter (left) as seen in the new documentary feature, “RBG.” Photo courtesy of Magnolia Pictures.

If you were to ask Ginsburg what helped her the most, however, she would say that it was the unwavering support she received from her adoring late husband, Martin, depicted in the film through archive footage dating back to their courtship days when they were undergraduates at Cornell University. In excerpts from Ginsburg’s testimony at her 1993 Supreme Court confirmation hearings, she credits her success to Martin, a man quite unusual for his generation in that he recognized her as much for her intellect as he did for her appearance. Throughout her career, he supported her in all of her undertakings, even placing his own work life in a secondary position when necessary to help her advance. For his part, Martin saw the need for gender equality long before many of his peers and continually encouraged RBG to further the cause, doing whatever he could to provide assistance and support.

RBG was fervent about the plight of women in part because she could relate to the burden of responsibility often placed upon them, especially those who sought to be wives and mothers while building careers. She experienced some of this firsthand while in law school; in addition to attending to her own studies, she was the mother of small children and cared for Martin while he battled a rare form of cancer at a time when he was trying to complete his own legal studies. For women to take on such huge responsibilities and receive second-class treatment was patently unacceptable and, she believed, needed to be corrected.

Of course, Ginsburg’s life is not now and never has been all about career and responsibility. As the film shows, she’s an avid opera lover, having even appeared in some performances herself, as well as a strong patron of the arts. She enjoys the company of family, including her children and grandchildren. And, having experienced her own health challenges, she’s also an ardent fan of physical fitness to keep herself strong. Not bad for an 85-year-old who still works tirelessly at her job. 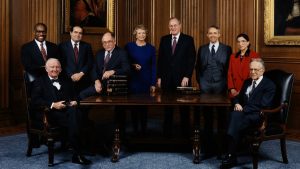 What’s more, RBG has demonstrated that it’s possible to rise above the great polarization affecting the country these days. This is illustrated through archival footage depicting her profound friendship with the late Justice Antonin Scalia. While Ginsburg and Scalia were known for being ideologically miles apart, she also made it clear that such philosophical differences needn’t be a barrier to forging a friendship, as was very much the case with this seemingly mismatched odd couple. That, as much as anything, is a lesson many of us could stand to learn from these days.

These lessons and her accomplishments, however, would not have been possible were it not for the strength of her beliefs, the building blocks of the conscious creation process, the means by which we manifest the reality we experience. It’s hard to say if RBG has ever heard of this philosophy, but, based on her achievements, it’s nevertheless apparent that she’s an expert at making use of it, be it unwittingly or purposely.

The power of Ginsburg’s convictions and the depth of the faith she places in them permeate her accomplishments. Their presence is certainly undeniable. And it’s remarkable to think that they all became realized after having started out as mere ideas, intangible conceptions that existed as mere potentials awaiting activation into tangible constructs, something that couldn’t happen until someone came along to infuse the energy into them needed to bring them to life. Those who have benefitted from the realization of these initiatives should be thankful for her efforts.

In large part, Ginsburg’s accomplishments came about largely from her ability to envision change, to think outside the box and seek the implementation of the means to bring these new notions into being. This is a fundamental aim of conscious creation, to continually push the envelope so that reality can evolve and express itself as a constant state of becoming. Considering everything she’s been able to achieve during her time both before and behind the bench, it’s no wonder she’s come to be regarded as the genuine legal and judicial rock star she has become, the Notorious RBG, the title given her in the 2015 best-selling biography about Ginsburg written by Irin Carmon and Shana Knizhnik. 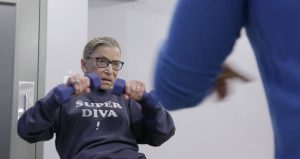 Despite a slight tendency to gush about its subject, this informative, briskly paced documentary presents an in-depth look at the public and private life of this remarkable woman. Through interviews with Ginsburg, life-long friends, family members, peers, journalists and the politicians who helped shape her career, as well as a variety of archive footage and audio recordings, the film presents a balanced package of information that both enlightens and entertains. For those who are unfamiliar with her many accomplishments, this is must-see viewing.

An old saying maintains that one will catch more flies with honey than with dung. So, in an age where there’s plenty of that substance that so readily sticks to fans freely flying about, it’s comforting to know that there are still reasoned voices out there that can make their points known and build consensus without resorting to unbridled anger or becoming the embodiment of overblown bluster. RBG is one such person, and, no matter how much one agrees or disagrees with her ideologically, we’re all better off for having her in our presence. Her brand of calming, informed argument – even in dissent – is something we need more of if we hope to avoid slipping further into social and judicial chaos. But, even more than that, she presents us with viewpoints that get us to reconsider our perspectives and expand the scope of our sense of inclusiveness in society. And we can probably never have enough of that.