Skip to content
Home/Conscious Creation, Drama, Movie Reviews/‘God’s Own Country’ encourages us to find ourselves

‘God’s Own Country’ encourages us to find ourselves

Finding the courage to assert ourselves and lead the life we want can be challenging, especially under unrelenting and oppressive circumstances. We can retreat from the world, drowning ourselves in various diversions, but, while that might take away the momentary discomfort, it doesn’t really solve the issue at hand. And the longer we put it off to the side, the longer the pain lingers and the more likely we’re to grow jaded and embittered. In the end, confronting the matter will provide the only real chance at a solution, but that can be difficult if we don’t know how to proceed. Such a dilemma may feel like a virtual prison sentence, but those are the circumstances faced by a young man stranded in the English countryside in the romantic drama, “God’s Own Country,” now available on DVD, Blu-ray disc and video on demand.

When twenty-something Johnny Saxby (Josh O’Connor) is saddled with the responsibility of managing the family farm when his father, Martin (Ian Hart), is incapacitated, he’s far from  thrilled with the idea. Given that Johnny’s seldom appreciated for his efforts by either his old man or his mother, Deirdre (Gemma Jones), he resents having to take on something that he has little interest in and for which he’ll receive virtually no credit. Also, as someone who’s interested in exploring the possibilities of his emerging gay lifestyle, there are few opportunities for self-discovery in the restrictive ways of conservative rural Britain. 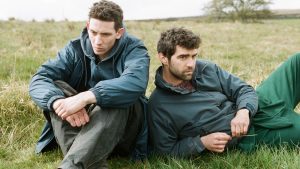 To cope, Johnny spends many of his evenings at the local pub, usually coming home thoroughly smashed, or pursuing anonymous, on-the-fly sexual encounters that amount to little more than momentary flings with no long-term potential. In many ways, he feels like one of the farm animals he tends to – penned in and constantly whipped by his keepers, biding time for an eventual demise (and, at the rate he’s going, one that might well be at his own hand).

When the busy season comes, the pressure gets turned up even further. With Martin unable to help Johnny during the impending lambing season, he can see that his unreliable son clearly needs assistance to get the work done. To help him out, Martin hires a Romanian immigrant farm hand, Gheorghe Ionescu (Alec Secareanu), on a short-term basis.

Johnny sees this development as another insult from the old man and subsequently takes out his resentment on the new hire. Because he needs the work, Gheorghe puts up with Johnny’s uncivil attitude initially. But, when those offenses turn personal, the hired hand lashes out in response. A new level of respect is thus established, one that opens their relationship to an entirely new level. Johnny begins to see what a diligent, caring worker Gheorghe is, an attitude that even begins to rub off on his own work ethic. But, even more than that, Johnny comes to understand what a good man Gheorghe is – one who might even make a good life partner. And, fortunately for Johnny, that feeling is apparently mutual, too. 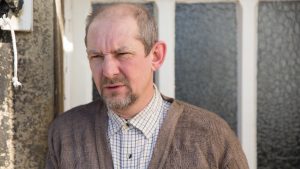 English farm owner Martin Saxby (Ian Hart) demands much from those who work under him, almost driving them to the point of alienation, in director Francis Lee’s debut feature, “God’s Own Country,” now available on DVD, Blu-ray disc and video on demand. Photo © 2017, by Dales Productions Limited/The British Film Institute, courtesy of Samuel Goldwyn Films.

While working in a remote area of the farm for an extended period, those sentiments begin to emerge. Johnny and Gheorghe give in to their romantic desires and freely explore their feelings for one another. But this is more than just off-the-cuff sex; this is genuine romance, something that Johnny’s experiencing for the first time. The nurturing care that Gheorghe so freely shows in his treatment of the animals becomes apparent in his treatment of Johnny, and, given the insufferable family background from which Johnny came, it’s something that he obviously treasures as well.

But will this budding romance last? What will happen when they return from their remote field work? How will they conduct themselves around Martin and Deirdre? Will Gheorghe’s work assignment be extended, or will it end as originally planned? And can Johnny and Gheorghe make things work in the real world in the same way that they did when by themselves in God’s own country? These are a lot of hard questions to be answered.

Having had a taste of what he really wants out of life, however, Johnny now has a new incentive to make things work. For perhaps the first time in his life, he knows what it means to be happy, to be his own person, no matter what others may think. The test for him, however, is, can he rise to the occasion to pull it off for the long term? Being the mature soul that he is, Gheorghe seems prepared for this, but can he say the same about the man who claims to love him? That’s the challenge as their story plays out.

As many of us have no doubt discovered. invoking the courage necessary to be ourselves can be daunting. The conditions around us may be so oppressive that we feel as if we’re being restrained. Even if such suppression is psychological and not literal, the effect can be burdening. 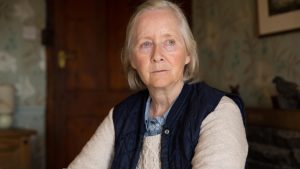 However, no matter how troubling such circumstances can be, what we experience ultimately comes down to what we believe. If we assume that our lives will be stifling, then such an outcome surely will follow. That’s the conscious creation process at work, the philosophy that maintains we manifest the reality we experience through the power of our thoughts, beliefs and intents.

In Johnny’s case, he initially sees no way out of things. The authoritarian dictates of his parents, coupled with the conservative nature of his environment, have convinced him that “That’s just how life is.” He resents these conditions, yet he engages in some acts of defiance, such as his nightly boozing and his clandestine trysts. But these escapes provide only temporary reprieves, because his beliefs in what he sees as unchangeable circumstances keep him locked in place from being able to implement any meaningful permanent change.

That’s all out the window, however, when Gheorghe arrives. He acts as a catalyst to challenge Johnny’s existing beliefs, showing him that other, better options are indeed possible. Through his presence, Gheorghe gives Johnny hope for a new future, one that’s more in line with his wishes and desires, qualities reflective of his true self. 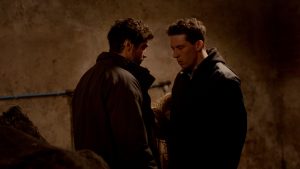 Of course, if change like this is indeed possible, one can’t help but wonder why Johnny has set up such a difficult path for himself on his way to making this discovery. One might assume that it would just be easier to create the desired circumstances in the first place, and that argument truly holds water. But sometimes we need to grow into ourselves, overcoming personal challenges and conquering our fears as part of the process. Such steps aid in our individual growth and enable us to discover the nature of our true being, revelations that are often so satisfying that we tend to appreciate the results more than we might have if we’d just been handed them without any effort on our part.

Johnny learns this for himself on multiple levels, too. Not only does he foster the kind of lifestyle he wants, but he’s also able to stand up to those who would try to hold him down, namely, his parents. Changes in his beliefs earn him the confidence he’s long sought to show them that his contributions to the farm’s operations are just as valuable as any practices, procedures or outlooks they try to summarily impose upon him. And, for his efforts, he’s able to secure the respect and appreciation he deserves but that has long eluded them. But, in the end, it all begins with him and his beliefs, for that’s what governs the manifestations that emerge in his life, no matter which area is involved.

In many respects, “God’s Own Country” reminds me a great deal of “Brokeback Mountain” (2005) but with a better narrative and script. Its fine performances are packed with considerable raw emotion, as well as a great deal of nuance, allowing the characters to come across as completely genuine. It’s also heartening to see a film that holds little back when it comes to its depictions of sexual content, presenting this material with an honesty rarely seen in mainstream cinema while avoiding the trap of becoming so unduly explicit as to be considered pornographic. But, most of all, the picture is filled with a tremendous sense of hope, one that will likely inspire most viewers to sincerely pull for the protagonists as they attempt to fulfill their dream. That’s somewhat common in many mainstream romantic releases, but it’s something not often seen in comparable offerings with gay leads. It’s nice to see it here. 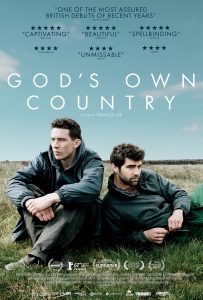 If you’ve never heard of this picture, it’s because it had only limited domestic release in the U.S., playing mostly at film festivals and in other special showings in late 2017. However, it received more play in the U.K., where it earned wider distribution, as well as a well-deserved BAFTA Award nomination for best British feature. Given the various home viewing options available now, though, it’s well worth the screening time.

Getting what we want out of life sometimes involves risk, taking chances to express our feelings and to rise up against the people and circumstances that might stand in our way. But, when we see the payoffs that come from such efforts, we often realize how worthwhile they truly are. Such are the conditions that prevail in God’s own country, a land whose promise is worth pursuing for all it has to offer to all who seek it.