Director Stanley Kubrick is arguably one of the most brilliant filmmakers who ever lived. Though he wasn’t particularly prolific and his productions came more sporadically in his later years, he nevertheless was responsible for such classics as “Dr. Strangelove or: How I Learned to Stop Worrying and Love the Bomb” (1964), “A Clockwork Orange” (1971), “Barry Lyndon” (1975), “The Shining” (1980), “Full Metal Jacket” (1987), “Eyes Wide Shut” (1999) and his groundbreaking masterpiece, “2001: A Space Odyssey” (1968), which was recently re-released in a beautifully restored, 50th anniversary edition. But, as skilled an auteur as Kubrick was, much of his repertoire never would have come into being in its magnificence were it not for the efforts of his right-hand man, a tireless jack of all trades who proved to be the man behind the man, the subject of the fascinating new documentary, “Filmworker.”

In 1968, aspiring English actor Leon Vitali went to see Kubrick’s “2001: A Space Odyssey”; he was captivated. Three years later, he screened “A Clockwork Orange”; he was captivated again. From that point forward, Vitali vowed that one day he would somehow join forces with the iconic filmmaker. And, after several years of journeyman acting work in British television shows and several films, he auditioned for the part of Lord Bullingdon in Kubrick’s “Barry Lyndon,” a role he landed, much to the young actor’s surprise. 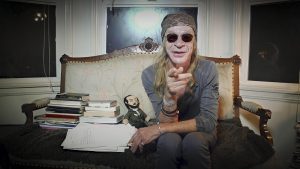 With a likeness of his collaborator, director Stanley Kubrick, at his side, longtime production assistant Leon Vitali explains the many roles he played in helping bring the filmmaker’s pictures to life in the riveting new documentary, “Filmworker.” Photo courtesy of Kino Lorber.

While on the set of “Lyndon,” Vitali became fascinated with all of the equipment, technology and expertise that went into the making of a film of this magnitude – so much so that he wanted to learn more about it. He asked Kubrick if he could watch the film editing process, perhaps become involved in it, even for no pay, just so he could learn the ropes, a request to which the director agreed. And, once Vitali got a taste of the behind-the-scenes work, he was hooked. He was convinced that he wanted to change tracks, leaving acting behind for the technical side of filmmaking, a bold move for someone whose onscreen career was just beginning to crest.

After gaining some valuable experience on the Swedish-Irish production “Terror of Frankenstein” (1977), Vitali approached Kubrick to see if there was a place for him on the director’s upcoming new production, “The Shining.” Again, much to Vitali’s surprise, Kubrick said yes, assigning him the crucially important task of casting a child actor to play Danny, one of the picture’s principal characters. After screening more than 4,000 hopefuls, Vitali successfully cast unknown Danny Lloyd to play the part, a decision that pleased Kubrick. With that accomplishment, Vitali fell into the good graces of the director, becoming his personal assistant, a role he would play for years to come.

Over the years, Vitali would work on Kubrick’s subsequent films, “Full Metal Jacket” and “Eyes Wide Shut.” And, with the rise of home entertainment viewing options in the 1980s, he would also play in an important role in the conversion and restoration work involved in readying Kubrick’s early pictures for videotape adaptation. In all of these projects, this included not only the English language editions with which most viewers are familiar, but also all of the many foreign language versions released around the world, an immense project given the scope of distribution involved. 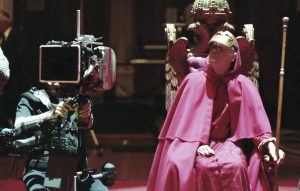 As director Stanley Kubrick’s personal assistant, Leon Vitali (center) did everything from checking the color of the film to playing small onscreen roles, as in this scene from the director’s final picture, “Eyes Wide Shut” (1999), as seen in the new documentary, “Filmworker.” Photo courtesy of Kino Lorber.

In doing this work, Vitali did whatever Kubrick asked of him, which often involved tasks in which he had no experience. Vitali would wonder how he could get them done and even expressed his hesitation to his boss. But, on some level, Kubrick knew Vitali was up to the challenge. He saw talents in his assistant that he didn’t recognize. In his encouragement, Kubrick would simply tell him, “You know how” or “You’ll figure it out.” And, for his part, Vitali always did.

Vitali’s tasks covered many areas, including everything from checking the color of the film to reviewing the marketing materials to even appearing onscreen in small roles and as an extra, as he did in “Eyes Wide Shut.” The demands were sometimes great, given the volume of work and Kubrick’s relentless penchant for perfectionism in all he did (and in all he expected from his production crews). Nevertheless, Vitali always rose to the occasion.

Some might wonder why someone would be so willing to give so much of oneself under circumstances such as this. As Vitali explains, Kubrick could be quite kind and generous, but he could also be an authoritarian taskmaster. However, considering what resulted from their collaborative efforts, Vitali has no regrets. His many contributions have gone into the creation and preservation of one of filmdom’s greatest legacies. And, through “Filmworker,” director Tony Zierra has finally given Vitali his due, at last recognizing the unsung part he has played in bringing these movies to life. 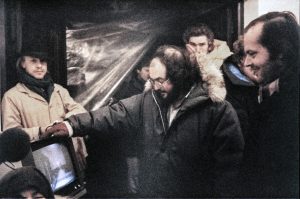 In watching this film, viewers have an opportunity to learn what it means to be part of something great, to participate in enlivening the creative vision of a master. The sense of loyalty, dedication and sacrifice that went into this work is abundantly apparent, clearly illustrating the protagonist’s passion for the work and in realizing the finished result. Anyone who has ever undertaken any effort of a tremendous magnitude can certainly appreciate what Vitali went through – and the fulfillment that comes through when the work is successfully accomplished.

In this regard, Vitali understood and respected the beauty of the creative process and what it’s capable of yielding. But that process never achieves fulfillment without the participation of those who bring its creations into being, and that’s where the practice of conscious creation comes into play, the means by which our reality is manifested – in all its aspects – through the power of our thoughts, beliefs and intents. And this is where Vitali’s beliefs take center stage.

As someone who appreciated the possible from a creative standpoint, Vitali put the required beliefs into place to flesh out such conceptions. Even if he wasn’t aware of the practice of conscious creation or aware of the relevant intents he was nurturing to activate it, his results nevertheless speak for themselves, demonstrating his obvious command of these capabilities. 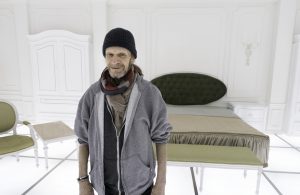 On the set of Stanley Kubrick’s iconic masterpiece “2001: A Space Odyssey” (1968), the director’s personal assistant, Leon Vitali, has long played a role in the preservation of the filmmaker’s cinematic library, including this groundbreaking work, as explained in the captivating new documentary, “Filmworker.” Photo courtesy of Kino Lorber.

Of course, Kubrick had a little part of his own to play in this process, conceiving of the ultimate vision he sought to achieve. But the fulfillment of that vision depended heavily on his collaborator’s participation. This partnership, where both participants had the right beliefs in place to attain materialization of the sought-after result, thus represents a prime of example of co-creation, where joint efforts produce the desired mutually manifested outcome.

It’s interesting to note, as discussed above, that Kubrick knew Vitali was capable of accomplishing tasks that he didn’t think he could. On some level, the director had to have sensed his collaborator’s capabilities and the underlying beliefs that supported them, even if Vitali didn’t recognize them himself. This is the power of intuition at work, and Kubrick obviously made effective use of it in identifying Vitali’s latent skills and encouraging his assistant in bring them to the surface. By doing this, Kubrick got results he wanted and enlightened Vitali to aspects of himself of which he was unaware, thereby broadening his palette of aptitude and his potential as both an artist and conscious creation practitioner.

Such awareness showed Vitali that there was more to him than meets the eye. With the revelation of these additional aspects of himself, it helped to draw out Vitali’s multidimensional self, something that characterizes all of us but that most of us don’t recognize. But embracing this part of our being is crucial to our personal and creative development, for it helps us to grow and become more than we are – or that we think we’re capable of. It enables us to surpass constricting limitations and blossom as the full-flowered individuals we can be. With the emergence of Vitali’s multidimensional self, unexplored elements of his true self were able to come forth and manifest all that he accomplished. And, given what he ultimately achieved, film buffs should be ever grateful for his efforts – and the beliefs that made everything possible. 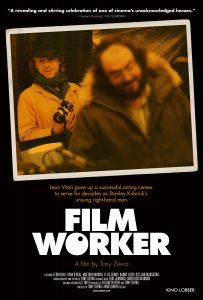 Leon Vitali may not be a household name, but his contributions to the world of film are incalculable. This film attempts to make up for that long-ignored contribution, showing the impact one man had on a treasure trove of celluloid classics. Movie fans the world over should be grateful for his efforts, and perhaps the best way they can honor him is by going to see this film. You won’t regret it.