‘Neighbor’ showcases the spirit of kindness and compassion

Showing a little kindness goes a long way, especially to those in need of compassion, nurturing and support. This is particularly true when it comes to young ones, who often struggle with the fundamental task of trying to understand how the world works, an increasingly challenging task in an ever-more complicated reality. For 30 years, an unlikely television personality undertook that very task, giving attention, encouragement, wisdom and support to those who all too frequently went overlooked by their preoccupied, impatient and even unconcerned elders. And now the many quiet but profound accomplishments of that soft-spoken, cardigan-clad TV icon are celebrated in the endearing new documentary, “Won’t You Be My Neighbor?”

In many respects, Fred Rogers (1928-2003) was probably the last person anyone would see as a television star. By all rights, most programmers probably would have viewed the gentle-mannered everyman who spoke in deliberate, measured tones as their least likely casting choice for hosting a TV program. But, given what Rogers set out to do, there was no one better suited to the job. And, through his long-running PBS series Mister Rogers’ Neighborhood, he made the most of his opportunity. With a mix of lovable puppets, a company of friendly “neighborhood residents” and even some big-name guest stars like cellist Yo-Yo Ma, all of whom engaged with the host in thoughtful conversations and sweet, charming songs, Rogers carefully crafted a program that grew from a local Pittsburgh production into a national sensation. 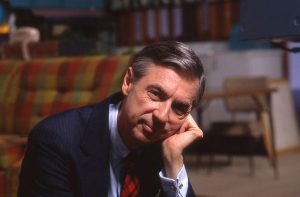 Children’s television icon Fred Rogers, host of the PBS series Mister Rogers’ Neighborhood, on the set of his long-running show, as seen in director Morgan Neville’s endearing new documentary, “Won’t You Be My Neighbor?” Photo by Jim Judkis, courtesy of Focus Features.

Rogers, who actively sought to spread the word to younger audiences about such concepts as kindness, acceptance and understanding, had just the right mix of qualities that small children could readily and comfortably relate to. As an ordained minister, he had an approachable demeanor that enabled him to effectively convey the importance and relevance of such humane values, but he never preached nor infused his teachings with religious dogma. In many ways, he communicated to his constituency of little ones on their own level, something that made him a big hit with the preschool and kindergarten crowd.

Ironically, Rogers disliked much of what was on television, especially for children. He believed that programmers were doing a major disservice to this audience by endlessly broadcasting inane shows filled with silly, slapstick humor that comically but inherently celebrated violence, bullying, humiliation and other undesirable values. He was convinced that the medium could be used more effectively, that it could serve as a positive influence to youngsters in their formative years by presenting programs that taught valuable life lessons and encouraged them to embrace qualities that would eventually make them better adults.

In pursuing this goal, however, Rogers didn’t believe in sugarcoating everything. When the show debuted in 1968, the world was experiencing considerable turmoil, such as the Vietnam War and the assassination of Presidential hopeful Robert Kennedy, events that undoubtedly bewildered many of the nation’s youth. But, rather than shelter children from these unpleasant realities, Rogers tackled them head on, addressing them thoughtfully in ways that kids could understand. He did the same when it came to exploring such issues as divorce, illness, racial strife and death, usually by discussing the subjects in ways that stressed qualities like compassion and tolerance. The hope here was that he could impart realistic but considerate attitudes about these aspects of life, unpleasant though inescapable as they may be. 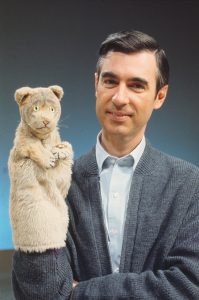 Fred Rogers, host of the long-running PBS children’s series Mister Rogers’ Neighborhood, poses with one of his beloved puppets, Daniel Tiger, in the new documentary, “Won’t You Be My Neighbor?” Photo by The Fred Rogers Company, courtesy of Focus Features.

In this sense, as series regular Elizabeth Seamans and producer Margy Whitmer observe in the film, Rogers was quite innovative, if not radical, in his approach. His material may have been dressed up in a pleasant, safe, accessible package, but his show’s content was quietly cutting-edge, far different from much of the other children’s programming of the day, something that discreetly  but profoundly set the program apart.

Rogers didn’t focus only on children’s issues, though; he had his share of dealings with grown-ups as well. For instance, he hosted two seasons of a documentary series called Old Friends…New Friends in which he interviewed celebrities like Milton Berle and Helen Hayes, taking an approach where he would try to engage in the same kind of thoughtful, meaningful conversation with adults that he did with his younger audiences. He also regularly appeared as himself on TV talk shows like those hosted by Tom Snyder. And, as a passionate advocate for government funding of pubic television, he testified before Congressional committees to make the case for his cause, expressing himself convincingly enough to change the mind of hardened skeptic Senator John O. Pastore, who was all but ready to see the proposed subsidy summarily scrapped. 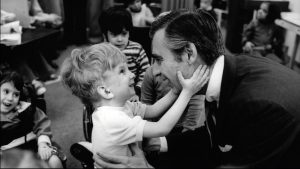 Through his efforts, Rogers truly was a pioneer in children’s television programming. Were it not for his vision, there may not have been the show that he created or the many others that have followed in its wake, such as Sesame Street and The Electric Company. Thanks to someone who believed in the idea that a medium as powerful as TV could indeed do better, we’ve been able to see that notion come into reality. And, given the current state of television, we could certainly use a lot more visionaries like Fred Rogers.

Of course, none of this would have happened were it not for Rogers’s command of the conscious creation process, the means by which we manifest the reality we experience through the power of our thoughts, beliefs and intents. Even if he never heard of this philosophy, he certainly had a mastery of its principles, and that’s apparent in what he so successfully materialized. And, at that core of that success was the firm grasp he had on his beliefs, those metaphysical building blocks that led to the creations he produced.

As noted earlier, Rogers firmly believed that children’s television could improve upon what it was producing at the time he was breaking into the business. His faith in that belief was indeed strong, and that helped make the realization of his goal possible. Perhaps that faith in what he sought to manifest was an outgrowth of his ministerial calling, an attribute that strengthened his resolve and made the possibility of fulfilling his objective that much more likely. Were we to apply that same kind of conviction toward our aspirations, drawing from Rogers’s example, we all might be able to achieve more of what we seek to accomplish. 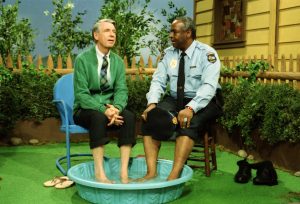 A large part of Rogers’s success came from his ability to envision possibilities that go beyond the conventional. By considering different options and surpassing established and supposedly accepted limitations, he was able to come up with conceptions not previously thought of, let alone attempted. Those who adhered to an innately narrower view, with a much more restricted belief palette, for example, may never have been able to come up with the inventive approaches Rogers used for addressing sensitive or difficult subjects in ways that children, with their less worldly ways, could understand. But it happened because, on some level, Rogers believed it could be done and brought into being. Again, if we were to adopt such an outlook for ourselves, there’s no telling what we might attain.

It’s indeed fortunate that Rogers focused his efforts on childhood development. As many in the metaphysical community are well aware, we, as human beings, tend to be most open to possibilities when we’re in our youth. Unfortunately, too many inquisitive, impressionable minds get shut down early on in life through the often-coerced imposition of limiting beliefs, perspectives that prevent the flowering of their potential. Through his programming, Rogers sought to counter that regrettable practice, encouraging his young viewers to keep those minds open at a time when they’re already the most receptive to inspiring input. In a world beset by as many challenges as we face these days, we can use as many open minds as we can find. And, to that end, a few more Mr. Rogers would serve us well, too. 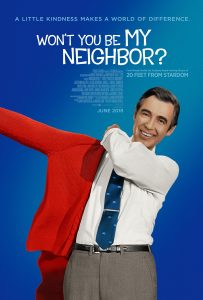 While there’s a slight tendency toward “Won’t You Be My Neighbor?” being somewhat saccharine encrusted, and despite some slightly sluggish pacing in the first 30 minutes, the film comes through successfully on all other fronts, effectively delivering its contents with ample humor, surprising candor and many heartwarming moments. Archive footage featuring interviews with Rogers and segments from his shows reveals the deceptively profound approach he employed and the many sides of the protagonist, including some very different from the nice but nerdy persona for which he’s probably best known. In addition, recent interviews with Rogers’s wife, children, friends and collaborators provide further insights into the man and his motivations. In all, director Morgan Neville has compiled a documentary well worth your time, again confirming this Oscar-winning filmmaker to be one of the best when it comes to this genre.

Given the pressures of today’s world, it’s easy to lose our composure and abandon our civility. Under conditions like this, we could all use some kind words and a little comforting to cope with the strife and challenges we face. And that’s where the wit and wisdom of Fred Rogers can do us all a world of good, especially if all of us ultimately hope to create a good world.