It’s been said that the ability to make others laugh is one of the greatest gifts anyone can possess. Laughter lifts spirits, brings joy and, as the old adage contends, serves as the best medicine. That’s something a beloved, gifted comedienne successfully discovered for herself – on all of those fronts – as fittingly and lovingly depicted in the heartwarming new documentary, “Love, Gilda.” 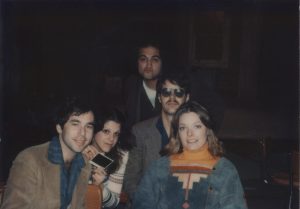 But, in many ways, this came as no surprise, given that this talent seemed to come naturally to the Detroit-born comic. From early on in her childhood, Gilda was a cut-up, finding it effortless to disappear into comedic character and making others laugh, a gift she freely shared with friends and family.

What’s less known, however, is that this ability served a purpose other than entertaining those around her; it also gave Gilda a defense mechanism to protect herself from the criticisms of others. As a chubby child, she was frequently chided about her weight. But Gilda wouldn’t allow this to get her down; whenever she would be bullied about her chunky appearance, she’d simply make a joke about it, defusing the situation and turning things around on her detractors. This skill would later prove to be an important element of her professional success as well, one that she would readily make use of whenever she found herself in the middle of a routine that wasn’t working out as hoped for. By impulsively doing or saying something funny to compensate for such unfolding failures, she could successfully transform poorly conceived material into a source of uproarious laughs, allowing even the worst routines to sparkle and appear completely natural.

As Radner grew into adolescence and adulthood, she parlayed her talents into successes in high school and college productions, followed by stints in the Canadian company of Godspell and Toronto’s Second City troupe and then as a cast member of the National Lampoon Radio Hour. Through these involvements she met longtime friends and collaborators John Belushi, Bill Murray, Chevy Chase, Martin Short and Paul Shaffer. These experiences also provided the springboards for the immense success awaiting her during her five years as a cast member of Saturday Night Live.

Radner’s contributions to that show helped establish the legacy of a program that has lasted for over 40 years. As part of the Not Ready for Prime Time Players, she and fellow collaborators Belushi, Murray and Chase, along with her other colleagues Dan Aykroyd, Jane Curtin, Laraine Newman and Garrett Morris, set a standard that has endured and influenced the many cast members who have since become part of the show’s heritage. Interviews with Chase and Newman, longtime producer Lorne Michaels, staff writers Alan Zweibel and Anne Beatts, and subsequent show hosts and cast alumni Melissa McCarthy, Amy Poehler, Bill Hader and Maya Rudolph reveal the tremendous respect, gratitude and admiration that they hold for Gilda and her comic contributions, all of them truly honored to have worked with her or follow in her footsteps.

Gilda’s accomplishments did not end with SNL either. She staged a tremendously popular one-woman Broadway show in 1979, and she subsequently went on to make five feature films, three of them (“Hanky Panky” (1982), “The Woman in Red” (1984) and “Haunted Honeymoon” (1986)) with co-star and future husband Gene Wilder (1933-2016). But, for all of the challenges she successfully took on through these endeavors, her greatest one was yet to come. 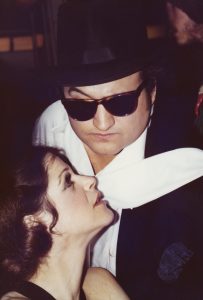 In the mid-1980s, Gilda began feeling tired and suffered from pelvic cramping. She sought medical help, which repeatedly concluded that everything was fine. However, as a subsequent CAT scan revealed, there was something very wrong – Gilda was diagnosed with Stage IV ovarian cancer.

According to those who knew Radner, she was initially woefully depressed. However, she soon realized that, if she were to beat this disease, she would need to tackle it head on. And, in typical Gilda fashion, she did so by employing the same tactic she used to take on her childhood detractors – humor. With the assistance of her SNL colleague Alan Zweibel, Gilda took the bold step to attempt something that no one had tried before – finding a way to make cancer funny.

Given the prevailing taboo about laughing at a debilitating, often-fatal illness, Gilda took a big risk with this venture. But, believing she had nothing to lose, she moved forward with her plan, making a critically acclaimed appearance on the comedy series It’s Garry Shandling’s Show in 1987 in which she lampooned her illness. This cutting-edge material raised some eyebrows, but it also successfully challenged one of life’s seemingly untouchable sacred cows. Gilda had thus broken through yet another barrier, the first comic ever to do so.

Unfortunately, Radner’s appearance on that show was her last time on TV. Even though the disease had apparently gone into remission, it came back. Gilda continued treatment, but fighting back became progressively more difficult. However, despite the lack of public appearances, Gilda wasn’t done yet. She wrote a memoir titled It’s Always Something, a reference to the signature tagline of her Roseanne Roseannadanna character. She also became actively involved with cancer support groups. Although initially reluctant to participate, she had a complete change of heart after attending a meeting at a wellness center. With the uplifting humor that made her so famous, Gilda picked up where she left off in this new venue. The stage may have been different and considerably smaller, but the impact she had there was just as important as what she accomplished in the limelight.

Through her involvement with these support outlets, Gilda left an impact that’s still being felt to this day. With the enthusiastic assistance of husband Gene Wilder, Gilda launched efforts aimed at encouraging ovarian cancer screening for women, especially those in high-risk groups. Her courageous battle against her illness also inspired the formation of Gilda’s Club, a nationwide network of affiliated clubhouses where cancer patients and their families and friends can meet to offer one another support and to discuss their circumstances. Thankfully, Gilda’s spirit lives on through these programs and institutions. And, because of that, she continues to prove, as she did in all of her other endeavors, that laughter truly is the best medicine. 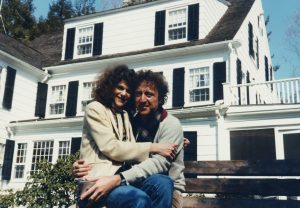 Although she died young, Gilda packed a lot of living into her 42 years, and much of it involved her doing what she wanted to do. Despite the sometimes-unfavorable conditions that dogged her at various times in her life, she overcame these circumstances by doing what she did best – successfully drawing on her talents and abilities. She was so proficient at this both personally and professionally, in fact, that virtually everything she undertook succeeded brilliantly.

That kind of success stems directly from a firm belief in one’s capabilities, the kind of conviction that yields the sort of hoped-for outcomes made possible by the conscious creation process, the philosophy that maintains the reality we experience is a direct result of the power of our thoughts, beliefs and intents. It’s not clear whether Gilda knew of or ever heard of this concept, but, based on what she accomplished, it’s obvious she was a master of its principles. For example, from early on in her life, she knew she had a knack for making people laugh, and she drew upon this belief in herself for decades to come. Firmly ensconced in her awareness of her abilities, she grabbed the ball and ran with it, transforming herself into a legend in the process.

This is not to suggest that she didn’t experience challenges along the way. The aforementioned childhood criticisms about her weight, for instance, were a source of personal frustration and irritation, a creation that, at first glance, might seem to have served little purpose. But, despite the difficulties this caused, it had an upside, too, in that it pushed her to continue honing her comedic talents, humorously making light of those who criticized her. Indeed, sometimes subjecting ourselves to a little adversity serves to strengthen us in ways that we may not be able to envision or understand at the time we experience it, proof that our beliefs can work to our benefit, even when the impact of their manifestations isn’t readily obvious at the time.

By galvanizing herself in her beliefs and abilities, Gilda broke through fears that might have held her back. It enabled her to live courageously, to take risks that other might shudder at. And, in the process, it allowed her to smash through barriers that benefited herself, as well as those who followed in her footsteps. For example, Gilda was the first person to say “bitch” on network television. But, because this once-forbidden word was uttered by her character Emily Litella, censors saw its usage coming from a sweet old lady as benign, reasoning, “What harm could there be in that?” And, then, of course, there was Gilda’s lighthearted take on cancer, something that once would have been considered unthinkable. But, since she knew how to make this sensitive subject funny, she got away it and did so successfully, opening a door previously sealed tight. 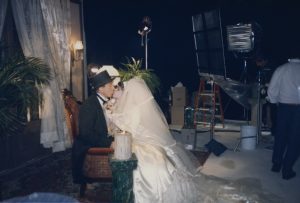 Gene Wilder (left) and Gilda Radner (right) appear on the set of their film “Haunted Honeymoon” (1986), one of three pictures they made together, as seen in the new documentary, “Love, Gilda.” Photo courtesy of Magnolia Pictures.

Of course, if she was so adept at employing conscious creation principles, one might ask, “Why didn’t she manifest a better outcome for herself in the end?” As I have written on numerous previous occasions, Gilda’s reasons – like those of all of us – were her own, and it’s not our place to question why circumstances played out as they did. However, when we look at what came about from her influence in the time since her passing – the cancer screening programs, Gilda’s Club and a better understanding of the impact of using humor as an additional weapon in helping to fight illness – she left a meaningful legacy, one that transcended her tremendous accomplishments as a comedic talent. She did more than just make people laugh; she left a legacy that has touched countless individuals, including some who may have never seen any of her brilliant routines. That’s a lot to leave behind.

Like the protagonist herself, it’s hard not to like “Love, Gilda.” This heartfelt tribute to one of the comedy greats of the last century pays sincere homage to her body of work through footage of her routines and the recollections of those who knew her or followed in her footsteps. With a wealth of archive material (some of it quite rare) and interviews with an array of those who shared the personal and professional stage with Gilda, director Lisa D’Apolito’s feature film debut provides a comprehensive look at the comedienne’s life, one sure to evoke both laughter and tears and doing so in a way that genuinely earns those emotions. In addition, through voiceovers, readings and graphic displays, the film features excerpts from the extensive collection of personal journals that Radner kept, revealing, for the first time, her innermost feelings about herself, her work, her battle against cancer and her outlook on life. Through this combination of elements, Gilda comes back to life, even though, in many ways, it’s always felt like she never left us. 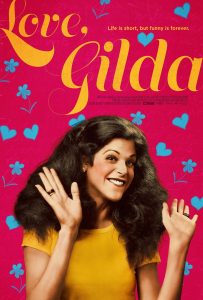 We’re all a little better off for having had this loving and laughing spirit spend some time with us, no matter how short, on this plane of existence. She made us smile, she made us cry, but she also made us happy. And we can never thank her enough for that.