What gives us personal satisfaction? That’s something many of us chase down throughout our lives, and some of us are fortunate enough to find it. But is this a quest we should pursue at any cost, especially if the goals are dubious? That’s a question posed in the new, fact-based biopic, “The Old Man & the Gun.”

Septuagenarian Forrest Tucker (not the actor) (Robert Redford) desperately wants to stay young, so much so that he actively looks for ways to help himself hold on to that feeling. But, instead of doing things like jogging, driving sports cars or going to singles bars – activities typical of aging men trying to preserve their youth in the 1970s – he’s found a pursuit uniquely his own: he robs banks.

Strange as that may sound, though, it’s common practice for him, given that he’s been doing it most of his life. Ever since he was a teen, Forrest has been engaged in various forms of crime, and he’s perfected his techniques to the point where he’s practically refined them as an art form. By employing his signature hold-up style of using incomparable politeness to defuse most of the tension typically associated with such situations, he’s able to carry out his heists without anyone ever getting hurt or firing a shot from the gun he allegedly packs in his overcoat. And he gets away with it every time, leaving the bank employees who freely execute his genial requests feeling unthreatened, if not outright calm. 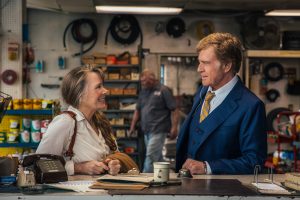 With a string of successful robberies across several states in the Southern Plains, he’s become something of a charming legend. His extensive knowledge of police radio electronics helps him track when and how authorities are pursuing him, and his geriatric partners in crime, Teddy (Danny Glover) and Waller (Tom Waits), provide the necessary reconnaissance and diversions that allow him to carry out his plans. As the leader of the so-called Over the Hill Gang, Forrest scores big and often, thwarting those who want to track him down. It’s quite a scheme.

Considering how much money he takes in, one might think Forrest lives large, but such is not the case. He freely shares the spoils of his efforts with Teddy and Waller, and he lives a rather modest, low-key life in middle-class suburbia. Rather than flaunt the rewards of his success, he stashes most of his bounty for safekeeping or uses it to help those whom he cares about, such as Jewel (Sissy Spacek), a widow with car trouble whom he stops to assist while fleeing one of his bank capers. He takes quite a liking to the roadside damsel in distress, too, prompting him to start seeing her on a regular basis between robberies, always careful to keep the truth of his ways from her.

Needless to say, authorities are confounded that the kindly thief keeps getting away with his crimes. Time after time, the police are frustrated when they interview dumbstruck bank employees who are so overwhelmed by the perpetrator’s charm that they can’t help but comply with his requests. Most officials come to believe that, because of the wily criminal’s ways, they’ll likely never catch him. But not Detective John Hunt (Casey Affleck); he’s convinced that the suspect can be collared with some good, old-fashioned police work – and a willingness to look past the polite magnetism that has so effectively clouded everyone else’s judgment. 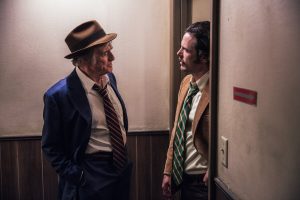 Thus begins a game of cat and mouse between Forrest and his pursuer. Can the constable get his man? Or will Forrest perpetually elude capture? And, if he is caught, can he stay locked up? As Hunt discovers during his investigation, his suspect has successfully escaped incarceration 16 times throughout his life. That’s quite a track record – and one that will be hard to challenge, even if the sly senior is captured and locked up.

Given how Forrest goes about his business, though, one can’t help but wonder, why does he do it? Why go to all the trouble of planning elaborate bank heists if he’s not going to enjoy the rewards of his efforts? And, considering his age, given what time he likely has left, why risk being caught or killed for a seemingly pointless life of crime?

As strange as all that may sound, however, Forrest sees his actions as anything but pointless. He may not employ his monetary gains to lead a lavish lifestyle, but he still gets something out of his actions. From his perspective, there’s much to be said for engaging in a pursuit that simply helps make one feel alive, regardless of the consequences and irrespective of how the fruits of one’s labor are put to use (or not put to use).

Forrest does what he does because it fulfills an urge, giving him satisfaction that other pursuits can’t. But how does he get away with it? On close examination, it’s apparent that his success at this “hobby” stems from the beliefs he holds about it, the building blocks of the conscious creation process, the philosophy the maintains we employ such thoughts and intentions in manifesting the reality we experience. Forrest may not have heard of this concept, but, as evidenced by the outcomes he achieves, he’s certainly mastered its principles. He’s so supremely secure about the beliefs he holds about his abilities that he makes everything look easy. In fact, he’s so confident that he’ll pull off his schemes and evade arrest that he doesn’t hesitate to brazenly taunt the captor seeking to hunt him down. We should all be so rooted in our convictions about what we do. 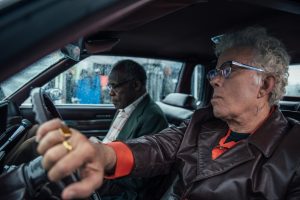 Teddy (Danny Glover, left) and Waller (Tom Waits, right), the supporting members of the Over the Hill Gang, a band of geriatric bank robbers who successfully knock off facility after facility, provide the reconnaissance required to carry out their plan, as seen in “The Old Man & the Gun.” Photo by Eric Zachanowich © 2018 Twentieth Century Fox Film Corp., courtesy of Fox Searchlight Pictures.

But, again, why bank robbery? Crime legend Willie Sutton once said he held up banks simply because “that’s where the money is.” Maybe Forrest drew from this plainspoken observation and followed in his counterpart’s footsteps just because he wants to experience the excitement, the adrenalin rush associated with such actions. Given Forrest’s advancing years, maybe he needs something like this to keep him young and vital, to feel like he is still, in fact, present in his own skin. And, since he goes about his business in a manner that minimizes the risk to himself and to others, perhaps he believes he can do this to get his thrills without anyone getting hurt.

In his own way, then, Forrest provides us with an inspiring example about facing our fears, not just when it comes to approaching tasks we might believe we can’t accomplish, but also about living life in general, free of the apprehensions that might hinder us in attaining what we want. This is a core principle when it comes to employing the conscious creation process, one that maintains staying locked in fear keeps us locked in place. Forrest would never allow this to hold him back, even when something as intimidating as prison bars stand between him and his objectives.

Forrest’s “avocation” may not be one for most of us. It’s difficult to sanction criminal activity under any circumstances. However, at the same time, one can’t help but admire someone who has the courage, forthrightness and fortitude to pursue what he believes is necessary to help him feel engaged with life, what it means to be an active and involved part of his existence. If nothing else, it certainly helps one avoid the regrets many of us may have for not pursuing what we want to do to accomplish that goal. That, for example, is a concern that Detective Hunt freely acknowledges about the nature of his own life. He worries that he’s wasting away his days in an unfulfilling job that doesn’t deliver the happiness and satisfaction he seeks, a concern he expresses to his wife (Tika Sumpter) and even his kids (Ari Elizabeth Johnson, Teagan Johnson). 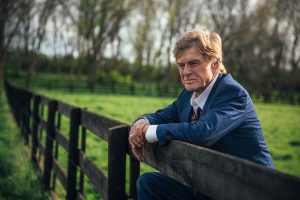 Some might be worried that Forrest’s story carelessly glorifies criminal activity, and that’s certainly a legitimate concern. At the same time, though, it also makes the case for the value of chasing one’s dreams, even those of a questionable nature, if they lead to personal fulfillment. Life is shorter than most of us realize, especially when we’re young. Do we really want to approach the finish line feeling like we’ve squandered our temporal capital by playing it safe or squelching impulses that end up unfulfilled? Forrest’s story may take a backhanded way in making this point, but it’s a valid contention nevertheless, one we should all ponder before the clock runs out.

Director David Lowery’s charming and curiously inspiring tale about living life on one’s own terms, even when questionable activities are involved, entertains with charm, wit and gentle humor. In what is said to be Robert Redford’s cinematic swan song, the acting legend shines in a quietly understated role, one backed by an excellent supporting cast who know how to complement their colleague without outshining him. This delightful comedy-drama is a fitting tribute to round out a storied acting career. 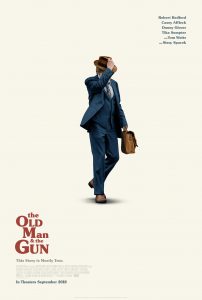 In an age where many feel overwhelmed, if not numb, to an oppressive, claustrophobic world closing in on us, the desire to genuinely feel connected, even alive, may be equally compelling. This longing may lead to behavior aimed at breaking out of this encroaching cage, actions that some see as debatable, perhaps antisocial. But is it not preferable to maintain our personal sovereignty, even if disapproved of by others, rather than capitulating to an act of personal surrender? In his own way, this criminal folk hero lived his truth, despite the consequences, as long as it allowed him to maintain his sense of self. And, with such an intention at stake, who can argue with that?