So often in life, we end up settling, taking jobs we merely tolerate, getting into relationships that are less than satisfying, and sacrificing our creative visions for purposes of practicality, convenience or commercialization. How unfulfilling those experiences generally prove to be. But need things be that way? Can we live our lives on our terms, attaining the gratification we crave? Maybe it just takes a little inspiration to put us on the path toward that kind of personal, professional and creative fulfillment, an example amply depicted in the provocative new biopic, “Bohemian Rhapsody.”

What does it mean to live a royal lifestyle without being a member of the monarchy? Just ask Freddie Mercury (Rami Malek), lead singer of the legendary rock band Queen, itself an iconic ensemble in the world of pop music. From 1970 to his death in 1991, the flamboyant front man with a four-octave vocal range left a mark on the music world as a singer, songwriter, instrumentalist and arranger, both as part of the band and as a solo artist, as well as a producer of other artists. His wide-ranging contributions to the field of rock music, with influences from a variety of other genres including everything from funk to opera, helped distinguish Mercury as a singular talent unlike virtually anyone else in the business. 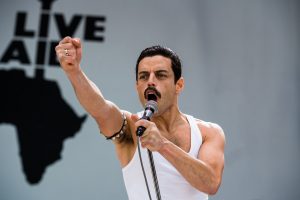 Born Farrokh Bulsara in Tanzania in 1946, the enigmatic musician and artist of Parsi descent spent much of his childhood in Mumbai and Africa before he and his family (Ace Bhatti. Maneka Das, Priya Blackburn) emigrated to England to escape the persecution of Indians during the Zanzibar Revolution. Once in London, he took an active interest in the local music scene while working as a baggage handler at Heathrow Airport and as a secondhand clothing purveyor in a resale shop with his eventual girlfriend Mary Austin (Lucy Boynton). His big break came in 1970, when Farrokh, now known by the stage name Freddie Mercury, teamed up with guitarist Brian May (Gwilym Lee) and drummer Roger Taylor (Ben Hardy) in a band called Smile after that group’s lead singer quit. A year later the trio was joined by bassist John Deacon (Joe Mazzello), and the group’s name was changed to Queen, a designation Mercury considered more regally befitting of the ensemble’s self-assured attitude and diverse, profound talent.

With Mercury’s flamboyant stage presence and his emergence as a solid songwriter, along with the strong supportive backing of manager John Reid (Aidan Gillen), best known for skyrocketing the career of Elton John, the band took off with hits like the campy pop number “Killer Queen”, the enigmatic operatic-inspired “Bohemian Rhapsody” and the heartfelt ballad “Love of My Life”, a song Mercury penned for Mary. These diverse compositions revealed a tremendous range, one that helped set Queen apart from other acts.

Fans ate up the band’s varied musical styles, which was good for building a loyal following but which also made the group difficult to classify, a quandary for Ray Foster (Mike Myers), the head of Queen’s record label, EMI Records. To counter that argument, Mercury and his band mates insisted that such musical diversity is what made Queen the phenomenon that it was becoming, but Foster would have none of that, especially when the group pressed for having the six-minute-long “Bohemian Rhapsody” released as a single off their album A Night at the Opera in 1975. Foster refused their request, and the band walked out, the quartet proclaiming on their departure that Foster would become known as the man who lost Queen, a fateful prediction that would eventually become notorious in the music business. 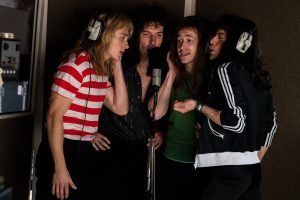 As Queen’s star power soared, Mercury and his cohorts began living the lifestyle of true rock gods. For Freddie, this enabled him to lead the extravagant, outrageous life he always aspired to. In pursuing such a lavish way of life, he began leaving his old existence behind, and one of the casualties of this was Mary. While he freely acknowledged that she was indeed his soul mate, her grounding influence wasn’t enough to rein in someone who was increasingly interested in indulging his whims and experimenting with what life had to offer, particularly in the sexual arena.

Freddie began exploring his gay side, eventually becoming lovers with Paul Prenter (Allen Leech), John Reid’s assistant. The relationship ultimately proved to be a disaster, though, as Paul’s opportunistic nature surfaced. Over time, Paul manipulated Freddie into unilaterally firing Reid, a move that spawned discord in the band. He also surrounded Freddie with an array of bad influences who enabled him to live out his fantasies but who also contributed to undermining his health and well-being. As rapidly as his star rose, Freddie was on a decline personally and professionally, a cycle that only ended when he broke off this toxic relationship. 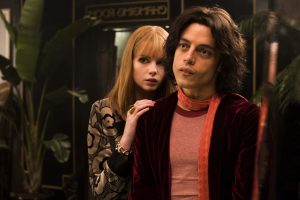 Meanwhile, Freddie began growing concerned that he may have contracted AIDS, the devastating illness that was ravaging the gay community at the time. He wondered how much time he had left and wanted to make the most of it, first by patching up his relationship with his musical colleagues and then by smoothing over his fragile friendship with Mary. He also wanted to explore relationship possibilities with Jim Hutton (Aaron McCusker), a kindly but no-nonsense server who worked at one of Freddie’s outlandish soirees. Making peace with himself and his life became crucial with the prospect of a death sentence hanging over him.

In addition to these personal reconciliations, Freddie felt compelled to leave some kind of lasting professional legacy as well. That opportunity arose when Queen was offered the chance to perform at Live Aid in 1985, the legendary benefit concert organized by activist and musician Bob Geldof (Dermot Murphy) designed to help raise funds for the starving in Ethiopia. With an extensive broadcast satellite network linking the globe to live performances in London and Philadelphia, the concert was slated to feature appearances by such luminaries as Paul McCartney, Elvis Costello, David Bowie, U2, The Who, Madonna, Duran Duran, Mick Jagger, Tina Turner, Bob Dylan and Tom Petty, among others. Joining such a line-up gave Queen a chance to join elite company and to perform on a worldwide stage, and Freddie and the band took full advantage of the opportunity. The group’s 21-minute Live Aid segment would later go on to be voted the best live rock performance in music history. In that brief span, Mercury cemented his place as one of the most iconic figures in rock of all time.

Despite some of his excesses and exercises in questionable judgment, Freddie’s story brilliantly shows us what it means to live life on our own terms. He may have drawn criticism for some of his choices and behavior, but he refused to compromise himself artistically or to shy away from pursuing life’s pleasures to their fullest. He packed a lot of experiences into his 45 years, and, even though his time may have been shorter than he probably hoped for, he certainly had a great ride, one that many of us would likely envy, especially those among us who refuse to get off the sidelines and enjoy what our existence has to offer.

So how is it that people like Freddie are able to live their lives on their own terms (and make it look comparatively easy)? It’s because they believe they can, convinced that they’re able to transform their intangible intents into materialized tangible outcomes, the driving principle of the philosophy of conscious creation. It’s unclear whether or not Freddie ever heard of this doctrine, but, based on what he accomplished and how he led his life, it’s obvious that he had mastered its core concepts.

Freddie’s unshakable faith in his personal confidence was perhaps the greatest driving force in his belief toolbox. This enabled him to conduct his life without reservation, proceeding with his ambitions regardless of whatever criticisms or chiding might come his way, be it from his often-disapproving father, EMI’s Ray Foster or those critical of the band’s music. He simply followed his own dictates and didn’t let such hindrances get in the way, a quality that helped inspire the entire band, pushing the group’s level of greatness beyond what may have been attainable without his inventive influence.

The foregoing is also indicative of Freddie’s courageousness, his willingness to forge ahead without the encumbrance of fear, an influence that often inhibits or derails the flow of the conscious creation process. Getting past such limitations is a chief aim of the philosophy, and Mercury never hesitated to tackle obstacles that might hold him back. In fact, he even learned how to use potential drawbacks to his advantage. This is perhaps best seen in Freddie’s dental profile. Having been born with four extra incisors, he developed a somewhat pronounced overbite, a condition about which he was said to have been self-conscious. However, the extra teeth also made his extended vocal range possible, allowing him to reach those extra octaves and give his singing voice an added level of distinction. (Lemonade, anyone?)

By following his own path, Freddie clearly lived out his value fulfillment, the conscious creation concept associated with being our best, truest selves for the benefit of ourselves and those around us. Freddie Mercury and Queen gave us countless memorable musical numbers, most of them distinct in their own right and clearly differentiated from one another, a quality to which few bands can genuinely lay claim. That in itself is an accomplishment truly worth taking a bow. 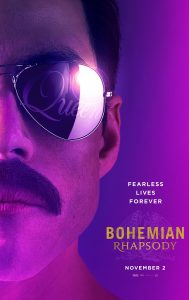 As well made as this biopic is, “Bohemian Rhapsody” has nevertheless polarized viewers. In my view, though, many of the criticisms have struck me as cynical, superficial or, most importantly, insufficiently explained. Many reviews have contended things like “Freddie Mercury deserved a better movie” without offering further elaboration. Granted, the film has come under the microscope for some factual discrepancies and revisionist interpretations of certain historical events, criticisms that are not without merit. However, given that former band members Brian May and Roger Taylor were actively involved in the making of this production, one can’t help but wonder how much credence should be given to these disparagements.

Overall, this offering hits mostly right notes in telling its story and enlightening viewers about its central character. Malek is outstanding in the lead role, a portrayal that could have easily turned cartoonish if not properly handled. The re-creation of the band’s Live Aid performance is stunning, moving and uplifting. What a true joy it is to see someone fully living up to his potential in the moment, qualities that enlivened both Mercury’s performance as well as Malek’s portrayal of it. If nothing else, see this one for this and the other excellent performance sequences, but don’t be surprised if you come away loving it for the rest of its qualities as well.

For his part, Freddie Mercury refused to settle, no matter what area of his life was involved. Had he done otherwise, he likely would have faded into obscurity (or worse). He realized, just as the title of one of Queen’s early hits suggests, that’s what it takes to “Keep Yourself Alive”. And, if we truly want the same for ourselves, we had all be prepared to follow suit. Only by doing that can we claim that we are the champions.