The school of life can hand us some pretty tough lessons. If we fail in our efforts, we may come away from such experiences dejected. Those feelings can be particularly difficult to bear if we’re aware that our failings stem from wrongdoings that we might have (or should have) avoided, incidents that leave us wearing a badge of shame. And rectifying those missteps may prove quite the challenge as a downtrodden law enforcement professional discovers for herself in the gripping new crime thriller, “Destroyer.”

Los Angeles Police Detective Erin Bell (Nicole Kidman) looks like she’s been on the losing end of one too many altercations. The hard-drinking, overworked, sleep-deprived investigator comes across as being one step away from becoming a walking corpse. Yet, somehow, she manages to keep going, often following her own rules and keeping others, like her law enforcement partner (Shamier Anderson), out of the loop. Her renegade work habits have earned her a reputation among her peers. But, then, that’s due in part to what she did in the past and not just her current routine.

Sixteen years ago, when Bell was new to the job, for her first assignment, she was tasked to work an undercover operation with an experienced FBI agent, Chris (Sebastian Stan). They were charged with infiltrating a gang that roamed the nearby California desert engaging in assorted criminal activities, most notably bank holdups. The duo went in with the best of intentions but soon found themselves in over their heads, both in terms of the temptations all around them and the undeniable personal attraction that developed between them. A recipe for trouble was clearly in the offing – and on multiple fronts.

Those troubles didn’t end when the assignment concluded, either. Bell suddenly found herself the mother of a daughter, Shelby (Jade Pettyjohn), who has since grown up to be a rebellious wild child. Erin has virtually no relationship with the rambunctious adolescent; she has defiantly chosen to live with her mother’s ex-boyfriend, Ethan (Scoot McNairy), and routinely goes out of her way to irritate mom by spending most of her time with her older, surly, blatantly disrespectful squeeze, Jay (Beau Knapp). This scenario gives new meaning to the term “dysfunction.” 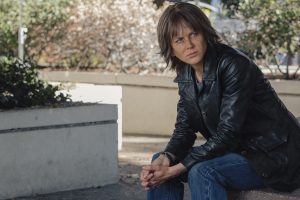 But, if that weren’t bad enough, ghosts from that first fateful assignment have now come back into Bell’s life, dredging up painful memories and lingering regrets. One by one, she runs into former gang members (James Jordan, Zach Villa, Tatiana Maslany), some of whom have gone straight while others have continued their lawless ways. However, rather than allowing herself to be undone by these developments, Bell decides to take matters into her own hands, using these old contacts to help her make amends for her past. They put her in touch with a crooked attorney (Bradley Whitford) who can lead her to what she seeks most – the gang’s evil kingpin, Silas (Toby Kebbell). It’s a quest that Erin hopes will enable her to redeem herself for the events of so many years ago.

Thus begins the detective’s hard-fought odyssey to set matters to right. Through a series of flashbacks and the film’s main narrative, viewers discover how Bell arrived where she’s at, as well as why it’s so important for her to rectify past missteps. It’s a gritty path, to be sure, but it also holds the potential to be transformative and redemptive, considerations that Erin would like to see realized while she still has a chance.

When we stumble in life, we may think there’s no way to make up for it, that we’re fated to suffer unending and unforgiveable consequences. That can be especially true when we know we screwed up – and knew we were doing so at the time – leading us to believe that there may be no escape from our self-imposed loathing. But such is not the case. We always have an opportunity to right our wrongs to redeem ourselves. “Destroyer” shows us what it means to make the effort at doing just that. It may not be an easy process, as Erin finds out firsthand here. However, with the right intentions and a little determination, we’re likely to achieve what we set out to do, and there’s a lot to be said for that.

How well we succeed at this depends upon the beliefs we hold at the time we embark on such a journey. And that’s important given that our beliefs, thoughts and intents are the building blocks of the conscious creation process, the philosophy that maintains we draw upon these resources in shaping the reality we experience. If we believe we can succeed, there’s a good chance we will; but, if we have doubts, then the likelihood of a desirable outcome dwindles.

When it comes to Erin’s approach, she seems suitably motivated to press on to reach her goal, even in spite of her depleted condition. Years of not taking care of herself – most likely driven by beliefs in the regrets she’s been holding onto – have definitely taken their toll. Such conditions have also been exacerbated by the harsh conditions of her job. It’s a combination that has left her beaten down, the sort that would probably prompt most of us to just give up. But not Detective Bell; she know she’s got a job to do, and she’s set her mind on seeing it through.

This is true for Erin both professionally and personally. She fully realizes she hasn’t been the best mother to Shelby, and she sees the result of that in the relationship (or lack thereof) that she has with her daughter. She wants to make up for this, though that’s a tall order, given that she has to undo a lot of the damage that she caused over the years. Whatever success she attains will depend not only on her efforts, but also on how well this co-creation plays out, given that Shelby is just as much a part of what materializes as her mother is. Each will have to evaluate their beliefs about one another and whether or not they have a future together.

When faced with prospects such as these, we can always hold out hope that there’s a chance for redemption. And hope can be a potent belief in and of itself, one that can blossom into a powerful force if we allow it to express itself in fully manifested forms. For her sake, Erin had better put her faith in this notion while the opportunity presents itself. 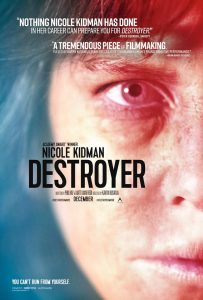 Although a bit sluggishly paced at times, this crime saga about the search for justice and redemption is a surprisingly good thriller with an excellent Golden Globe-nominated lead performance by Kidman in a decidedly different role. The clever storytelling format, coupled with a no-holds-barred approach to the action sequences, combine for an intriguing (and at times shocking) saga, made all the better by inventive editing, an eclectic but well-orchestrated mix of cinematography styles and a carefully measured sequence of revelation. Director Karyn Kusama’s latest has been getting an undeserved bad rap in some critical circles, but, thankfully, an increasing number of reviewers have been coming around on this one. Go see it for yourself and make up your own mind; you may well come away pleasantly surprised.

What we make of our second chances depends on how we approach them, particularly when it comes to recognizing the opportunities they represent. If we’re paying attention at all, we should realize that such breaks may not come our way all that often and that it would be in our best interests to jump on them when they appear. They just may make it possible for us to take off that badge of shame, something that should be especially important to someone who wears a badge for a living. Here’s wishing her (and us) luck.