‘Blame’ searches for the nature of underlying truths

Getting to the root of unethical or illegal behavior sometimes takes some doing. It may require considerable digging and ruling out what is initially looked upon as seemingly obvious. It might even involve traversing some highly unexpected paths to expose the culprits and their well-concealed misdeeds. There’s even the possibility that there may be more going on than meets the eye. So it is with life at an emotionally charged high school as seen in the seductive drama, “Blame,” now available on DVD and video on demand.

Sensitive but troubled teen Abigail Grey (Quinn Shephard) is about to return to high school after undergoing treatment in a mental health facility for an undisclosed disorder. All indications are that she’s doing better, and her parents (Elizabeth Ann Howell, Carlyle Owens) believe she’s ready to resume her regular routine. Abigail’s not so sure, but she goes along with the plan, despite her apprehensions.

Abigail’s biggest worry is how she’ll be treated by her peers, and, on this front, she has legitimate reasons for concern. Bullying and humiliation, it seems, are common practices at her school, especially the kind routinely doled by manipulative mean girl Melissa Bowman (Nadia Alexander) and her various cronies, Sophie (Sarah Mezzanotte), Ellie (Tessa Albertson), Eric (Luke Slattery) and TJ (Owen Campbell). Melissa even has a pet nickname for Abigail, callously referring to her as “Psycho Sybil,” an offensive, exceedingly hurtful reference to the title character of Flora Rheta Schreiber’s 1973 book about the treatment of a young woman afflicted with dissociative identity disorder (formerly known as multiple personality disorder). 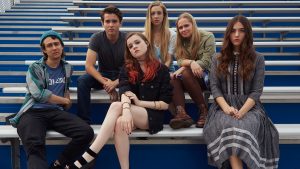 Needless to say, such cruel treatment makes Abigail’s return to school difficult. Fortunately, she’s able to find some solace in her drama class, a subject she seems to enjoy and one in which she receives ample encouragement from her teacher, Mrs. Howell (Geneva Carr), who also helps to shield her against malicious onslaughts from the resident bullies. However, when Mrs. Howell goes on maternity leave, Abigail’s future in the class is thrown into jeopardy. Thankfully, though, her fears are soon vanquished with the arrival of a kindly substitute, Jeremy Woods (Chris Messina), who takes a special interest in Abigail when he sees how unfairly she’s being treated by her classmates. But, even more than that, he’s also sufficiently impressed at how much talent she possesses.

Jeremy thus becomes both a protector and patron for Abigail. He intervenes on her behalf when she comes under attack from Melissa and her cohorts. And, to encourage the development of her acting ability, he assigns her the plum role of Abigail Williams in the class production of Arthur Miller’s The Crucible, a part that Melissa also wanted. Needless to say, being relegated to Abigail’s understudy brings out the worst in Melissa, prompting her to ramp up her menacing machinations and making her rival’s life ever more difficult. But, whenever the need arises, Jeremy steps in to shelter his prize pupil to see that she’s getting a fair shake on all fronts.

Because of all this attention, Abigail quickly begins taking quite a liking to Mr. Woods – and he to her. The relationship between teacher and student begins to grow more complicated and precarious. Each thinks about the other constantly, causing new problems, such as troubles in Jeremy’s relationship with his girlfriend, Jennifer (Trieste Kelly Dunn). And, when Abigail’s classmates begin getting wind of what’s going on, innuendo starts making the rounds, providing Melissa with new ammunition to smear the reputation of her classmate and, potentially, that of her teacher if she doesn’t get what she wants. Suddenly Jeremy’s choice of The Crucible for a class production takes on a whole new irony of its own. 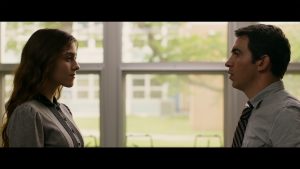 As questions of propriety swirl, Jeremy begins pulling back. But this leaves Abigail confused about his feelings toward her, a development that threatens to undo all the progress she’s made at becoming psychologically stable once again. In his attempt to offer help, he may have inadvertently made matters worse, and, with rumors of a possible inappropriate relationship rearing their ugly head, there could be even more at stake, especially when Melissa fans the flames of speculation.

But, as strange as all of the foregoing twists and turns have been, even more lie ahead – and they have the potential to affect those least expecting them. How everything plays out for all concerned raises serious questions about who’s really at fault and for what. The answers to the thorny questions raised here indeed carry the seeds of surprise, but sometimes it takes circumstances as complicated as these for the truth to be liberated – and to see where the blame for things really lies.

Situations like this frequently raise the question, “Why must we always make things so needlessly complicated?” In a civil world, much of the behavior on display here would be seen as patently unacceptable and inherently unnecessary. Yet here it is nevertheless. One can’t help but want to investigate how and why it arises in the first place.

The “how” of this is actually quite simple – like anything that crops up in our experience, it appears as a result of the conscious creation process, the philosophy that maintains we manifest the reality we experience through the power of our thoughts, beliefs and intents. But the “why” behind this is a trickier proposition. Considering the incendiary complications associated with these circumstances, not to mention the potentially explosive consequences that accompany them, one might wonder why any of the characters would want to create them, especially since they carry the seeds of needing to lay blame, as the film’s title suggests, at the foot of the responsible parties.

Convoluted situations like this often lead to the unraveling of complex scenarios that have long gone unaddressed and/or that frequently involve significant life lessons, revealing the kinds of profound insights that often surface through personal introspection or even psychotherapy. It also may involve the exposure of hidden truths that are masked by outward and seemingly inexplicable behavior. Why, for example, does Melissa feel so compelled to be such a bitch, especially toward someone as inoffensively harmless (and easily hurt) as Abigail? Melissa’s cruelty is so extreme and her manipulations are so conniving that even her friend Ellie eventually gets turned off by them. 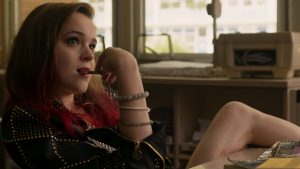 Bad girl Melissa Bowman (Nadia Alexander) hatches one of her many schemes to get her way in “Blame,” now available on DVD and video on demand. Photo courtesy of Samuel Goldwyn Films.

So what’s going on here? Is this a case of inherent evil emerging? Or is it something else, such as an unconscious projection of personal insecurities onto someone less able to fight back and defend herself? A look at Melissa’s dysfunctional home life, especially the heavy-handed, often-insensitive treatment doled by her stepfather (Tate Donovan), proves revelatory, but why take out those frustrations on Abigail? Maybe Melissa has feelings she’s not yet ready to deal with but can’t bear to keep them bottled up and thus needs to have some kind of outlet, such as an easily victimized target, like Abigail, on which to dump them.

And, speaking of Abigail, what role is she playing in this? Given that her relationship with Melissa is a co-creation, Abigail obviously plays a hand in its manifestation, but to what end? Could it be that her disempowered nature is serving as a mirror for her nemesis? What’s more, given Abigail’s unexpected success in drama class, is she setting an example to show others how they can overcome the same kinds of difficulties she’s been experiencing and excel? Her efforts in these areas may not be readily apparent, and she may have chosen a hard path to bring them into being, but if they’re understood and appreciated at some point, their impact could be substantial both in inspiring others and in helping her to heal herself.

Then there’s Jeremy. Why is he allowing himself to be drawn into a potentially career-ending and criminal involvement, especially since his actions may end up doing more harm than good? He knows it’s wrong, yet he can’t help but be tempted by the opportunity when it presents itself.

But is his relationship with Abigail truly about romance? While it might be to a certain degree, there’s potentially something else going on here, namely, a desire for Jeremy to be honest with himself, particularly when it comes to attaining what he wants. The onetime aspiring actor drifts from job to job, accepting temporary positions – such as his gig as a substitute drama class teacher – to hold him over, but never taking the initiative to be honest with himself about his heart’s desire or the steps needed to see it realized. Maybe the desire he feels for Abigail is intended to awaken this trait in him and to prompt him to adapt it to areas of his life where it clearly could stand to be implemented. Of course, he needs to get clear about what Abigail’s presence in his life truly means and not to misinterpret the passion she inspires in him as something other than what it really is. 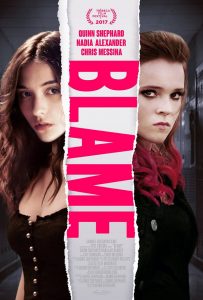 A similar case can be made for why Jeremy is present in Abigail’s life. He encourages her, filling her with confidence and prompting her to develop and employ her sense of personal power. She needs this, both to develop her acting abilities, as well as to protect herself against the onslaught of personal attacks coming her way.

Clearly there’s a lot bubbling beneath the surface here, and many of the camouflaged elements covering them at the surface are keeping these issues from being recognized, let alone addressed. That’s how these situations end up becoming needlessly complicated. However, sometimes these masked elements need to be in place so that the potency of the revelations they eventually help to uncover are heightened and impactful, leaving a significant impression on those who need to get the messages they impart. Of course, the underlying meanings of these situations need to be discerned if they’re to have any value, because, if they’re not, misunderstandings surely arise, and that can lead to the consequence of blame needing to be assigned, something that ultimately benefits no one. High school, it would seem, could be a place of learning important lessons other than what’s taught in the classroom.

Though at times a little predictable and at other times a little underdeveloped, this premiere feature from 24-year-old writer-actor-director Quinn Shephard nevertheless shows her tremendous promise as a filmmaker. In this coming of age tale that combines elements of pictures as diverse as “Lolita” (1962), “Heathers” (1988) and “Carrie” (1976) (without the psychic aspects), Shephard explores topics ranging from mental health to emerging sexuality to inappropriate relationships to bullying in a thought-provoking yet entertaining vehicle. Shephard also turns in a fine performance as a misunderstood teen, backed by an equally strong portrayal by Nadia Alexander as her bad girl rival. Having been nominated for an Independent Spirit Award for best first screenplay, this film is available for screening through various home viewing options.

Sometimes we’re all too quick to point the finger at others for their behavior. But, as the old saying goes, when one finger is pointed at someone, there are three others pointed back squarely at us. What’s more, when circumstances are fundamentally misinterpreted because the truth is obscured, assessing them can be more problematic than one might assume. Assigning blame for such situations thus proves to be a trickier proposition than what might be apparent at first glance. Consequently, we must be careful where we direct those digits of ours; it could prove to be a more painful and humiliating experience than we anticipate.