‘Captain Marvel’ celebrates coming into our own 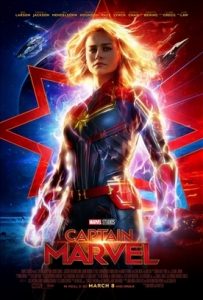 Many of us have likely had experiences where we walk around in a fog wondering who we really are. Whether it’s determining the nature of our calling or the scope of our talents or some other consideration, from time to time we’ve all gone through episodes like this where we feel we’re lost and unable to find our way. There may be clues to help point the way, but they may be vague, fragmented or seemingly unrelated to one another, offering little assistance and perhaps confusing matters even more. Our best hope in situations like this is that a clear path will reveal itself to set us on our way, enabling us to become who we were meant to be. Such is the case with a hero in training seeking to discover herself and live up to her full potential, the central thrust of the thrilling new action-adventure saga, “Captain Marvel.”

On the planet Hala, home world of a race of noble warriors known as the Kree, Starforce cadet Vers (Brie Larson) is troubled by her dreams. These nighttime visions feature people and events that are ostensibly unknown to her but that also possess a strangely vague familiarity. That’s particularly true when it comes to images of a charismatic middle-aged woman who makes recurrent appearances. But the lack of ready answers to this conundrum bothers Vers; as someone who’s quickly riled and easily motivated to get to the bottom of matters, she grows restless with the lack of definitive resolution. 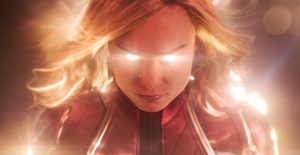 Unsure what to do, Vers turns to her mentor and commander, Yon-Rogg (Jude Law), for advice. He recommends that she work on controlling her emotions (before they control her), especially in light of the magnitude of her ample special powers, such as an ability to blast powerful proton ray bolts from her fists. So, to attain the self-control and peace of mind she seeks, he encourages her to take an audience with the Supreme Intelligence, a fusion of consciousness and A.I. that governs and advises the Kree, particularly in matters of discovering and understanding their true selves.

Vers agrees with her mentor’s suggestions and decides to seek the S.I.’s counsel. This protean, enigmatic energy-based entity communicates with its petitioners by assuming the form of the individual each of them subconsciously most admires. For Vers, the S.I. takes the shape of the woman from her dreams (Annette Bening), affirming for her that this stranger is apparently someone for whom she holds a deep-seeded respect. But for what purpose?

Vers comes away from the experience no more enlightened than when she went in, although the visit apparently triggers enhanced recall of her repressed memories, which obviously must be important to her, even if she can’t determine their significance or pinpoint the source of their origin. She attempts to set the issue aside as she prepares for her next military assignment, a rescue mission to retrieve a Kree spy captured by the Skrulls, a race of shape-shifters with whom her people are at war. However, while carrying out her duties, Vers is captured by the Skrulls’ commander, Talos (Ben Mendelsohn). But, as someone who is not one easily detained, the resourceful cadet makes her getaway when an opportunity presents itself, fleeing in an escape pod that sends her barreling toward a mysterious planet designated C-53, otherwise known as Earth. 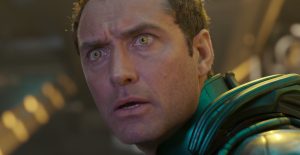 Separated from her peers in a place called Los Angeles in the year 1995, Vers desperately seeks to reunite with her fellow warriors. But, given their faraway location and the “primitive” communications technology of the planet on which she now finds herself, arranging a rendezvous takes some doing. And, considering that the cadet’s less-than-discreet arrival has drawn considerable attention from authorities, Vers scrambles to establish a low profile, not an easy task with both government officials and Skrull insurgents in hot pursuit.

In the midst of the chaos, Vers encounters Nick Fury (Samuel L. Jackson), an agent of a clandestine government organization known as S.H.I.E.L.D. (Strategic Homeland Intervention, Enforcement and Logistics Division). Given the extraordinary events unfolding around them, Fury is unexpectedly drawn into an investigation that’s far above his pay grade. Nevertheless, he’s so intrigued that he seeks to assist Vers in whatever way he can. Drawing upon his high-level clearances, Fury helps Vers gain access to secret government facilities where the mystery behind her dream images is slowly revealed.

“Vers,” as it turns out, is a variation on the name she went by when she lived the life of an earthly human, Carol Danvers, a test pilot who was allegedly killed in a crash six years earlier. What’s more, upon further investigation, Vers/Carol learns that the mysterious woman from her dreams was Dr. Wendy Lawson, a Kree aeronautics scientist pronounced dead in that same crash, who came to Earth in human form to secretly work on developing technology that she believed would end the war in which her people were bitterly embroiled. But, as significant as those discoveries are, they pale in comparison to the biggest one of all – the reason why Dr. Lawson was working on her technology in the first place, a revelation that makes clear much of what Vers has long believed about her world and her people is far from the truth.

Armed with this information, Vers/Carol commits to seeing through Dr. Lawson’s goal. She joins forces with her onetime best friend, fellow test pilot Maria Rambeau (Lashana Lynch), along with Fury and several other unexpected allies (including Dr. Lawson’s specially gifted cat, Goose (Reggie/Gonzo/Archie/Rizzo)), to carry out this mission. It’s an undertaking that ushers forth an array of unexpected new developments for two worlds at war. But, on a personal level, it also brings about significant changes in the protagonist herself, empowering new attributes that are truly something to marvel at.

The incredible journey of this remarkable woman is truly something to see, not only in terms of the extraordinary nature of the circumstances, but also with regard to the personal transformation she undergoes. Her true self emerges from her inner depths, surfacing to take its rightful place in her world. It’s a process that calls upon Vers to take an introspective look at who she really is, an endeavor requiring her to grasp the beliefs that define her character. Understanding those notions is fundamentally important, for they shape the reality of who she is and what she experiences, cornerstone principles of the conscious creation process, the philosophy that maintains we tap into our thoughts, beliefs and intents to manifest the existence around us. 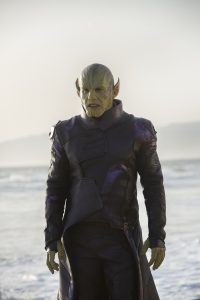 During her time on Hala, Vers has only a vague sense of who she is. It bothers her, too, which is why she so earnestly seeks to create the conditions that will eliminate that uncertainty. This explains her experiences with the Supreme Intelligence, her repressed memory recall and her eventual journey to Earth, all of which set up the opportunity for the truth to emerge – and for her true nature to come out.

This process involves not only a revelatory understanding of her present circumstances; it also requires her getting in touch with a past of which she knows virtually nothing. It calls for her to get in touch with experiences deeply buried in another time, not only the events themselves, but also her beliefs about them. Accessing these feelings provides valuable insights into her younger self, first as a child (London Fuller) and then as an adolescent (Mckenna Grace). Vers/Carol sees who she was, an adventurous spitfire who was often discouraged from partaking in activities in which girls weren’t supposed to engage, an attitude routinely promoted by authority figures, such as her father (Kenneth Mitchell). 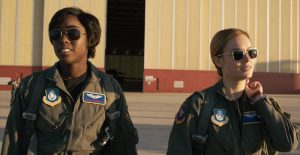 As discouraging as these positions were, though, young Carol refused to let them hold her back. She believed in herself and her abilities and didn’t hesitate to act upon them in materializing the existence she experienced. It’s what enabled her to become a test pilot, for example. And, in a less than conscious way, it’s also what allowed her to become a Starforce cadet, even though she wasn’t fully aware of what she was getting herself into. But, as difficult as this path was, it’s also what brought forth the ultimate expression of her true self as a seeker of peace and a protector of the downtrodden, her emergence as a superhero, Captain Marvel.

Captain Marvel’s accomplishments go beyond her feats of heroics; they reveal her as a character who can do more than just beat up the bad guys. They also reveal her as someone who is a shining beacon of compassion, one who cares profoundly for the needs and well-being of others, particularly those who are unable to adequately fend for themselves. But, even more importantly, they show her as an example of someone who deeply inspires others, particularly those of her gender, such as Maria’s preteen daughter Monica (Akira Akbar), a youngster cut from the same cloth as her beloved Auntie Carol. 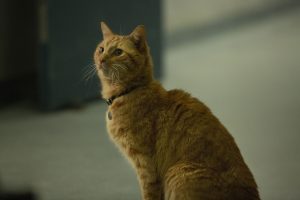 All of these attributes are reflective of the conscious creation principle known as value fulfillment, the concept that we live our lives as our best, truest selves for the betterment of ourselves and the world around us. Vers/Carol/Captain Marvel has much to offer us – and herself – by allowing her innate qualities to come to the surface. This aspect of the protagonist’s story is perhaps as important as anything she does to vanquish the evildoers, revealing what truly makes a superhero “super.”

Hands down, “Captain Marvel” is the best superhero movie I’ve seen in quite some time. It’s excellent in every regard – well written and well acted, without an overreliance on action or special effects gimmickry to carry the story. Oscar-winning actress Brie Larson, while best known for her dramatic turns in films like “Short Term 12” (2013) and “Room” (2015), seamlessly steps into the role of superhero, capably supported by a cast of colorful supporting players who add humor, intrigue and warmth to a well-constructed narrative. Frankly, I don’t care how well or how poorly this offering fits into the larger Marvel Comics Universe mythology or the overall marketing strategy of the franchise; I judge a film on its individual merits, and, on this score, this picture succeeds brilliantly on every front. This release does what a movie of this genre should – entertain, inspire and leave viewers feel as though they’ve genuinely gotten their money’s worth from the theatrical experience. 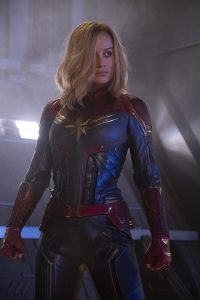 Breaking through the barriers that keep us from seeing, understanding and appreciating the truth about ourselves can be a genuinely fulfilling experience. It allows us to assess and draw upon our own unique set of personal capabilities, skills and talents that have the potential to do a lot of good in the world – and beyond. The example offered here provides us with a tremendous source of inspiration to see this through – and to attain goals that are super in every sense of the word.