Skip to content
Home/Conscious Creation, Documentary, Movie Reviews/‘On Her Shoulders’ speaks for those without a voice

‘On Her Shoulders’ speaks for those without a voice

For those without a voice, it’s often difficult to be heard. In those cases, it generally takes someone with the courage and resilience to step up and make the case for them, not the easiest of undertakings. But, when an advocate with the right qualities emerges, incredible results are possible. So it is with an unlikely envoy for a little-known aggrieved people as seen in the stirring documentary, “On Her Shoulders,” available on DVD, Blu-ray Disc and video on demand.

Speaking for refugees whose story has largely gone ignored is difficult enough, but, when the spokesperson is one of those refugees herself, the burden can be a lot to carry. So it has been for Nadia Murad, a passionate advocate for the Yazidi people of northern Iraq, a religious and ethnic minority whose homeland was overrun by attacking ISIS forces in 2014. Through an orchestrated campaign of carnage that included murder, rape and sexual enslavement, the insurgents quickly overran their victims, including a 19-year-old Nadia, who was held captive for three months before escaping. Her ordeal became her cause, which is now told in director Alexandria Bombach’s documentary. 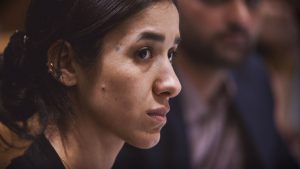 Former ISIS captive Nadia Murad details her painful experiences and those of her fellow Yazidis in the moving documentary, “On Her Shoulders,” available on DVD, Blu-ray Disc and video on demand. Photo courtesy of Oscilloscope Laboratories.

The film follows Murad as she seeks to make the story of her people known to a world that has heard precious little about them and their plight through mainstream media channels and official sources. Through visits to Canada, Germany and Greece, the film documents Nadia’s efforts to inform the public through interviews, personal appearances, and meetings with both refugees and political figures. In addition to increasing awareness about this humanitarian crisis and seeking the attention and support of the United Nations, Nadia’s work also includes tireless efforts to bring war crimes charges against the culprits who plundered her community, an initiative backed by human rights attorney Amal Clooney.

But “On Her Shoulders” is more than just a record of Nadia’s official activities. It also depicts the phenomenal pressure that has been unexpectedly thrust onto a young woman who wanted nothing more than to live a simple life in her homeland. This becomes apparent through her nonstop schedule of events to spread the word and to comfort those who were fortunate enough to flee the tyranny of their attackers. It’s also painfully obvious through the media interviews and hearing testimony that she gives in which she recounts in painful detail – over and over again – the ordeals that she and her people suffered at the hands of her enemies. The film thus reveals an individual of remarkable personal strength and fortitude, as well as a committed and eloquent spokesperson for an oppressed community.

Needless to say, all of this has carried a tremendous cost, both at the time of Nadia’s capture and torture, as well as in her constant reliving of the ordeal in making the case for her people. However, given what’s at stake, she refuses to capitulate to these circumstances, continually striving to promote awareness of the genocide and atrocities inflicted on the Yazidis. This is perhaps best reflected during her address before the U.N. General Assembly in 2016, when she stated, “This world was not only created for you and your families. We also want life, and it’s our right to live it. If beheading, taking women as sex slaves, raping children and the displacement of millions will not move you – when will you move?” 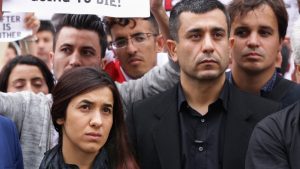 Based on the foregoing, it’s easy to see how this unlikely champion of her cause is an embodiment of courage and inspiration. She’s firmly rooted in her convictions, convinced that she must carry through and fulfill her mission. These traits and ambitions are clearly indicative of someone well versed in the practice of conscious creation, the philosophy that maintains we manifest the reality we experience through the power of our thoughts, beliefs and intents. And, regardless of whether or not she’s consciously aware of the existence of this discipline, her actions and efforts nevertheless faithfully reflect its principles.

This is particularly true when it comes to the concept of value fulfillment, the principle that maintains we live out our beliefs to be our best, truest selves for the betterment of ourselves and those around us. Given what Nadia has undertaken, it’s hard to imagine someone more devoted to justice and the well-being of her people. Despite the tremendous personal pain she has suffered, she has carried forward fearlessly with an unshakable faith in her convictions, determined to see things through. We should all be so committed to our endeavors.

Thanks to her efforts, word of the plight of the Yazidis has finally begun to gain recognition. This remarkable young woman should be commended for everything she has accomplished thus far. Let us hope that we don’t let her down now that she’s made her case and gotten our attention. 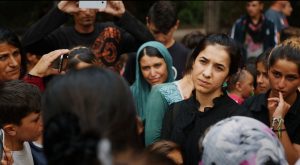 Speaking to Yazidi refugees in Greece, Nadia Murad (second from right), spokesperson for her displaced people, learns of the experiences of her peers in the stirring documentary “On Her Shoulders,” available on DVD, Blu-ray Disc and video on demand. Photo courtesy of Oscilloscope Laboratories.

This incredibly moving documentary can be a difficult film to watch at times, but its impact is undeniable. One can’t help but feel for the fate of the Yazidis, as well as Nadia’s personal pain, accomplishments attained through Bombach’s masterful direction. The filmmaker genuinely earns our heartfelt emotions without becoming manipulative, maudlin or gratuitously graphic. “On Her Shoulders” is authentically affecting in a way that many other films telling similar stories fail to achieve.

For its efforts, the film received a number of honors and awards, most notably the National Board of Review’s prestigious Freedom of Expression Award. In addition, the picture earned two Independent Spirit Award nominations, including nods for best documentary and the competition’s Truer Than Fiction Award. It also picked up two Sundance Film Festival documentary nominations for best director and the Grand Jury Prize. 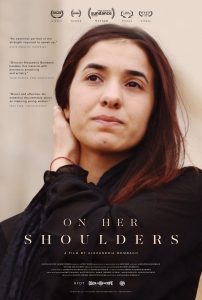 It’s truly unfortunate in this day and age that we still need advocates like Nadia Murad. But, as long as we as a species continue to engage in the kinds of atrocities like those committed against the Yazidis, the stories of these horrendous crimes must be told. Thankfully, we’re fortunate to have courageous souls who are unafraid to speak up and make the truth known in hopes that we can keep such horrific episodes from happening again.