Many of us would probably like to think we’re true to ourselves, being honest and forthright and acting in line with our truest intentions. But are we? What if we let other considerations creep into play, like feeling the need to be overly sensitive so as to cause no offense? Perhaps we might also feel a little competitive with others, succumbing to peer pressure and comparing our situations to theirs, fudging things a bit in the process to appear on par with them. Or maybe there are additional, hard-to-spot concerns that get in the way and cloud our thinking. Such are some of the issues faced by a group of outwardly blissful but inwardly insecure suburbanites in the wacky new comedy, “Greener Grass.”

Ah, Suburbia, the land where all is perfect and the promise of everything wonderful is always unquestionably fulfilled. So it is (or so it would seem) in an upper middle class version of this modern-day utopia, where every mother is an ever-smiling soccer mom, all residents have (or are working on getting) perfect teeth and everybody is so polite that they make Canadians appear downright rude. Life is beautiful.

Or is it? In “Greener Grass,” the filmmakers follow the lives of two couples, Jill and Nick Davies (Jocelyn DeBoer, Beck Bennett) and Lisa and Dennis Wetbottom (Dawn Luebbe, Neil Casey). They live in a hyper-pastel community that resembles the neighborhood in “Edward Scissorhands” (1990) with touches of “The Stepford Wives” (1975, 2004), Martha Stewart and David Lynch thrown in for good measure. They reside in impeccably appointed homes, get around by driving brightly adorned golf carts and watch pleasantly innocuous TV shows like “Bald Guys and Bouquets.”

Jill and Nick are the publicly proud (though privately anxious) parents of Julian (Julian Hilliard), an awkward 7-year-old having trouble fitting in (and controlling his bladder), and Madison (Abigail Kurtz, Allison Kurtz), a newborn whom everyone adores (perhaps a little too much at times). Lisa and Dennis meanwhile are mom and dad to Bob (Asher Miles Fallica), whom they’re having a devil of a time raising, a problem that makes them want more children – and at almost any cost.

Jill and Lisa are (supposedly) best friends, though at times it seems they know little about each other (such as Lisa not knowing that Jill was going to have a second child until she actually sees her friend holding the baby in her arms, something she ”just noticed”). And, despite their allegedly close friendship, they’re also somewhat competitive with one another (though ever so pleasantly, to be sure). One thing’s for certain, however: Lisa envies Jill’s life and quietly (and perhaps somewhat less than consciously) reshapes her own existence to emulate (some might say replicate or even steal) her friend’s reality. But, then, that’s not entirely unexpected; after all, isn’t keeping up with Joneses one of the presumptions of suburban life?

As their lives play out, Jill and Lisa go about their daily affairs with one another and their fellow suburbanites, such as Kim Ann (Mary Holland), a home-based purveyor of designer knives who’s divorcing her husband, Rob (Jim Cummings), and goes out her way to make sure everybody knows about it; Marriott (Janicza Bravo), an African-American hairdresser who could stand to sharpen her skills (and not by the methods she’s currently using); and Miss Human (D’Arcy Carden), the local primary school’s politically correct first grade teacher, an ever-vigilant, hypersensitive worrywart who’s terrified of being seen in a bad light, one that could earn her a reputation as something as unthinkable as “a Native American giver.” These interactions are anything but ordinary, but one can always be sure that they’re eminently courteous. 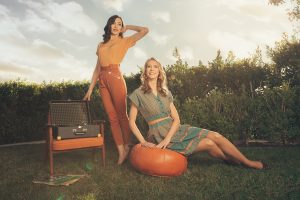 However, despite such pervasive and overarching pleasantries, will life play out as hoped for? Are there unexpected surprises that await the cheery residents? Or is Suburbia not everything it’s supposedly cracked up to be? In a land where the grass always seems greener over the neighbor’s white picket fence, one might ultimately find that it’s not as green anywhere as originally thought.

Having grown up in Suburbia, I can appreciate the bitingly cynical view taken by this strange little film. The pretense, hypocrisy and obliviousness displayed here may be more than a little exaggerated, but, at its core, the film aptly depicts qualities I often found in the daily existence of this “artificial” reality.

Why “artificial?” That’s because of the often-disingenuous nature of this lifestyle, one that all too frequently defies common sense and causes one’s head to spin. It also goes against many of the key concepts of the conscious creation process, the philosophy that maintains we manifest the existence we experience through the power of our thoughts, beliefs and intents. This cinematic indictment of those principles takes no prisoners, calling suburban life on the carpet to expose its “euphemistic” attributes as the phony, sham-like qualities they frequently are.

Perhaps the biggest such disclosure is how readily this lifestyle dispenses with integrity, a quality that goes a long way in characterizing the authenticity of our most heartfelt beliefs. When our intents are infused with this attribute, it significantly impacts what we manifest and how faithfully our creation efforts reflect what it is we’re actually seeking to materialize. The more we formulate beliefs in line with this principle, the more we can harvest desired creations. However, given how often the characters in this film qualify their manifesting beliefs by considerations that fly in the face of integrity and authenticity, such as their preoccupations with insincere politeness and political correctness, the further their creations stray from what they hope to achieve. With matters going awry at seemingly every turn, it should come as no surprise that things often don’t turn out as planned. This should be a potent cautionary tale to those of us – suburbanites or not – who let ancillary concerns creep into the realization of our hoped-for objectives.

The experiences of the characters in “Greener Grass” also reveal the pitfalls of “camouflage” and how it can cloud our perceptions of what’s really going on in our realities. As the name implies, “camouflage” distorts the character of the elements that make up our existence. What we perceive about our reality may not represent what we thought we were creating when, in fact, it indeed does, clearly showing us the nature of our manifesting beliefs, “flaws” and all, even if we don’t readily recognize them as such. Consequently, the true nature of those intents may seem obscured to us, even though we’re the originators of them in the first place. Granted, camouflage can ultimately help us to identify the “errors” in our thinking by attempting to make the distortions apparent. However, if we’re to get the lesson in this, it’s incumbent upon us to see how the results deviate from what we thought we were creating, a realization that can help us to see how we need to adjust the character of our beliefs to get what we want.

For this to happen, though, we must be willing – and able – to eliminate the metaphysical flotsam that pollutes our thoughts, beliefs and intents. We must be prepared to recognize, assess and, as needed, eliminate whatever clutter is gunking up those conscious creation building blocks. This may be easier said than done, especially if we’re unable or unwilling to let go of whatever gets in the way of our manifestation proficiency. For instance, if we can’t bring ourselves to dispense with undue politeness when it’s genuinely not called for, we may realize outcomes that are less than satisfactory, devoid of integrity, shrouded in deceptive camouflage and far removed from expectations, even though they accurately reflect what’s really going on in our beliefs. This can be a hard lesson, but it’s one we need to learn if we want results to live up to what we hope for, something that may prove especially difficult in an environment like the one portrayed here.

Even self-defense class is characterized by extreme politeness in the version of Suburbia depicted in the new off-the-wall comedy, “Greener Grass,” coming to theaters this fall. Photo courtesy of IFC Films.

Understanding this is crucial for maintaining and holding onto our personal power. When we compromise our beliefs for the sake of other considerations, such as the approval of others, even when that calls for us not being genuine with ourselves, we pay a potentially high price. We may end up giving away our power as a consequence, leaving us frustrated with our outcomes – and ourselves.

One of the factors that can seriously interfere with our efforts under these conditions is the impact of peer pressure. It tends to run rampant in Suburbia, and, in the depiction of it here, it’s on steroids and out of control. In the interest of not causing offense, however, its influence can become effectively paralyzing, especially when everyone in the community is bought into it. With their beliefs colored by this consideration, these suburbanites imprison themselves in a mindset where this concern overrides virtually everything else they hope to achieve. While there’s nothing inherently wrong with showing a little courtesy to one another, it can get out of hand when it reigns supreme. That’s perhaps best illustrated in the film on several occasions when golf cart operators approach an intersection from all four directions simultaneously and no one wants to be the first to proceed after they all stop. The fear of being discourteous in this situation (and essentially everything they do) is so overwhelming that no one can carry on with individual pursuits, leaving them stuck, unfulfilled and, very likely, flush with trepidation. Is that any way to create one’s reality?

The foregoing considerations naturally raise the question, “Is all of this worth it?” Based on what happens here, the answer for many of us most likely would be “no.” When Jill sees many of her expectations go hopelessly wrong, for example, she needs to take stock of her hopes – and their underlying beliefs – if she wants to manifest as an empowered conscious creator – that is, if she can bring herself to do so. That’s a lesson for all of us if we can’t bring ourselves to be who we really are – and seek what we really want.

Destined to be a cult classic, this off-the-wall metaphorical comedy takes viewers in unexpected directions from start to finish. Despite occasional editing/pacing issues, a tendency toward being episodic, some overly silly or underdeveloped bits that don’t land as well as they could, and a few too many protracted and repetitive reaction shots, this insightful debut feature from writer-directors DeBoer and Luebbe otherwise serves up an array of insightful, wickedly funny, truly outrageous laughs about life in Suburbia and the false promises often associated with it. Be prepared for something weird, and you’ll be rewarded.

“Greener Grass” has primarily been playing at film festivals, such as the recent Chicago Film Critics Film Festival, where I screened it. However, the picture has secured a distributor and will be receiving a theatrical run this fall. Check local listings for availability.

If ever we doubt our circumstances, we should look to ourselves first for clarification. We should ask ourselves questions like “Are we being true to what we seek?” and “How might we be sabotaging our lives (and for the sake of what)?” The answers could go a long way in giving us clarity about our thoughts, beliefs and intents regarding what we’re doing and why. They might even show us how to spot the errors in our ways – and help us find where the grass truly is greener.