Cinema for These Times

At a time when it seems coverage of the global pandemic is virtually everywhere (and inescapable), it’s hard to believe that there are those out there who can’t get enough about the subject, even when it comes to entertainment. Some – myself included – might find the notion somewhat maudlin or ghoulish, but each of us has our reasons, perhaps an interest in knowing more about the topic or simply just having a morbid curiosity. In any event, for those who possess such an insatiable appetite for the material, there are three films available for home viewing that could help to shed new light on the subject.

Those interested in a film that examines the concept of a pandemic from a comprehensive viewpoint might want to consider director Steven Soderbergh’s 2011 release, “Contagion” (web site, trailer). The picture looks at the subject from multiple angles, including the search for the disease’s origin, the effect on victims and survivors, the work of researchers to find a cure and the impact on everyday life. Viewers will likely find this offering to present a remarkably accurate – and often chilling – depiction of what we’re experiencing, almost as if our current real world situation is following the same script as that used to construct this film. “Contagion” features an impressive all-star cast, including Gwyneth Paltrow, Matt Damon, Laurence Fishburne, Jude Law, Marion Cotillard, Kate Winslet, Bryan Cranston, John Hawkes, Jennifer Ehle and Elliott Gould. The curious are likely to walk away from this one with new insights into what’s going on – and what to expect – as well as wondering which side of the screen they find themselves on. 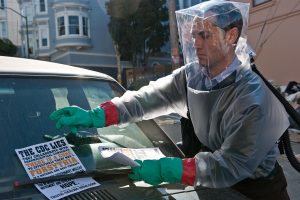 The internet lights up in the wake of a public health crisis, thanks in part to provocative bloggers like Alan Krumwiede (Jude Law), in the 2011 disaster drama, “Contagion.” Photo by Claudette Barius, courtesy of Warner Bros.

Viewers interested in more typically commercial fare may find themselves drawn to filmmaker Wolfgang Petersen’s 1995 blockbuster adventure, “Outbreak” (web site, trailer). With a cast featuring Dustin Hoffman, Rene Russo, Morgan Freeman, Kevin Spacey, Cuba Gooding Jr. and Donald Sutherland, this big-budget extravaganza tells the tale of a virus run amok in a small Northern California town and the measures employed to control its spread, including potentially drastic steps that threaten the lives of an entire community – and that set a dangerous precedent – unless heroic researchers investigating the illness can step in before it’s too late. “Outbreak” is the kind of popcorn thriller that has more than its share of incidents that at one time would have required a leap of faith to believe but that today no longer seem as implausible as they did when the film was originally released. Enjoy it, but don’t be surprised if you end up feeling like you’re whistling in the graveyard by picture’s end.

Finally, on a more philosophical note, there’s director Luis Puenzo’s 1992 French production of “The Plague,” originally titled “La Peste” (web site, trailer). Based on a novel by existential author and philosopher Albert Camus, this release – like “Contagion” – examines the subject from multiple angles. But, unlike that offering, “The Plague” goes deeper, looking at the topic from the standpoint of personal interpretations. What exactly is the underlying cause of the pandemic? Is it merely something biological? Or is it something deeper, such as divine retribution for the sins of humanity? In addition, the film also probes the efforts of the picture’s principal characters, providing perspectives on how they each see the incident – a medical emergency to be addressed, a news story to be covered or a spiritual crusade to save man’s souls before it’s too late. With a cast that includes William Hurt, Robert Duvall, Raul Julia and Sandrine Bonnaire, “The Plague” is certainly the most profound of these three offerings, and screening it should be reserved for a time when viewers can devote their undivided attention to it. This one may be a little more difficult to find than the other two, but it’s worth the time, especially in an uncertain age such as this, one in which many of us find ourselves assessing the meaning of this phenomenon and what it may hold for our future. 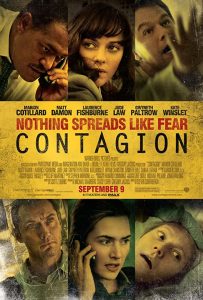 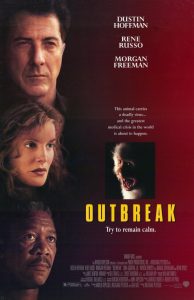 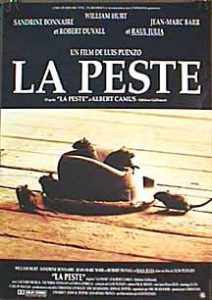 These options, admittedly, are not for everyone. In fact, for many of us, more escapist fare of another nature may be more fitting and appropriate. But, as the old saying goes, “Forewarned is forearmed,” and the information imparted by these offerings may help to provide us with the knowledge and insights necessary for tackling this difficult situation. Just be careful not to make things any harder on yourselves than they already are.