‘A White, White Day’ traverses the obscure fringes of reality

Feeling unsettled is one of the worst frames of mind in which we can find ourselves. We know something is genuinely disturbing us, but we can’t pinpoint exactly what. We might become restless or ornery and not even be able to say why. And, try as we might to determine the cause of this malaise, we’re often still left without an answer – that is, until we look deeper and beyond what we think is the cause, probing territory we hadn’t planned on (and may not want to do). Such is the case for a quietly troubled widower in the mystifying new drama, “A White, White Day” (“Hvítur, hvítur dagur”).

For those living in the small towns along Iceland’s seacoast, there are times when the fog descends to the ground, creating a murky, ethereal world bathed in white. Under such conditions, the environment takes on a decidedly surreal quality, one in which we may be puzzled by what surrounds us, leaving us unsure of where the reality we believe we know ends and an entirely new and different one begins. In fact, as the film’s opening graphic, attributed to an unknown source, observes, “On such days when everything is white, and there is no longer any difference between the earth and sky, then the dead can talk to us, who are still living.”

Such is the seemingly everyday experience of Indimunder (Ingvar Eggert Sigurðsson), a policeman on leave from his duties. He’s attempting to sort out his feelings about the recent death of his wife (Sara Dögg Ásgeirsdôttir), who was killed in a car accident on a coastal highway. He’s noticeably unsettled but not entirely sure why. He participates in regular therapy sessions with a counselor (þor Hrafnsson Tulinius), but they don’t seem to help much, partly because the therapist’s questions don’t get to the heart of the matter, but mostly because Indimunder has walled himself off from the world.

Indimunder’s inscrutable moods and tight-lipped demeanor offer few clues about his current mindset, frustrating those who care about him and are trying to offer help. In fact, his coping mechanisms seem to consist mostly of doing home renovation work, playing soccer, and visiting the police station to see fellow officers Bjössi (Sigurður Sigurjônsson) and Hrafn (Arnmundur Ernst Björnsson), engaging in minimalist conversations that consist of little more than small talk. It’s hard to see how any of this gives him any comfort, let alone joy; in fact, about the only thing that seems to lift his spirits is spending time with his young granddaughter, Salka (Ída Mekkin Hylnsdôttir). 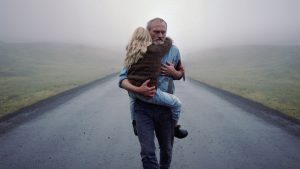 Icelandic policeman Indimunder (Ingvar Eggert Sigurðsson, standing) experiences a crisis of conscience while in the company of his granddaughter, Salka (Ída Mekkin Hylnsdôttir, back to camera), in attempting to overcome the loss of his wife in director Hylnur Palmason’s award-winning release, “A White, White Day” (“Hvítur, hvítur dagur”). Photo courtesy of Film Movement.

Little changes in Indimunder’s life until the evening of a family gathering, when relatives give him a recently discovered box of his deceased wife’s belongings. When he later peruses the contents of the box, he finds items that trouble him, many of which suggest that his wife had been having an affair with Olgeir (Hilmir Snær Guðnason), one of his soccer colleagues. The evidence initially appears somewhat circumstantial, but, when he finds something more conclusive, Indimunder begins a quiet slowburn. He starts melting down, engaging in progressively more troubling and obsessive behavior, particularly in his therapy sessions, in visits with his police colleagues and even in the time he spends with Salka. Others seriously begin to worry that he’s losing it, especially when he finally confronts Olgeir.

Ironically, however, as matters play out and things appear to spin out of control, the blockages that have kept Indimunder from healing at last begin to clear. It’s a painful process, to be sure, yet it gives him the tools he needs to discover why he’s withdrawn and has been unable to overcome his loss – issues that have more to do with him than with the circumstances involving his wife. But, then, such miraculous revelations become possible on a white, white day in coastal Iceland.

For much of the film, Indimunder comes across like an enigma, both to others in the story, as well as those in the audience. Something is obviously troubling him from the outset, and the emergence of his suspicions about his late wife’s affair provides some clues. However, given the growing nature of his erratic and irrational behavior – some of which is punctuated by fits of uncharacteristic emotional outbursts – there’s clearly more going on in his mind, much of which even he doesn’t seem to grasp or understand. True, he’s genuinely sad about his wife’s death, not to mention the apparent betrayal that didn’t surface until after her passing. But the degree of his irrationality and emotionalism suggests there’s more to it than that. Sadly, though, none of his actions and reactions get him any closer to a resolution of his grief or a satisfactory explanation for his profound unsettledness.

As Indimunder slowly comes to realize, the answers to his questions lie within him, but he must be willing and committed to peer inward to find them. In particular, he must examine the beliefs that drive his outlooks on what has transpired and why. But this also calls upon him to look at the role he played in their origination and establishment, for the resulting circumstances originated with his thoughts, beliefs and intents, the intangible building blocks of the conscious creation process, the philosophy that maintains we draw upon these resources in creating our reality.

Since Indimunder apparently doesn’t know how to go about this (most likely because he’s never heard about conscious creation before), he’s perpetually frustrated. And this frustration leads to the irrational behavior and emotional outbursts that result – and continually grow in intensity. If he ever hopes to get past the current state of affairs, he’ll have to figure out how to access, assess and understand what’s going on with him.

The murky white landscape of coastal Iceland provides a surreal setting for Indimunder (Ingvar Eggert Sigurðsson, right), a policeman on leave from his job, as he and his granddaughter, Salka (Ída Mekkin Hylnsdôttir, left), seek to work out a personal crisis in “A White, White Day” (“Hvítur, hvítur dagur”), now available for first-run online streaming. Photo courtesy of Film Movement.

In a sense, Indimunder needs to clear the fog that’s clouding his view, conditions that are metaphorically present in the surrounding environment. There’s a considerable amount of camouflage – both literally and figuratively – obscuring his perceptions, preventing him from seeing things clearly. However, in a setting like this, one also has greater opportunities for perusing the intangible and otherworldly, the stuff of which things like thoughts, beliefs and intents are made of. Such conditions thus make it possible to interact with that which we might not otherwise have contact in the bright light of a clear day. It’s as if the statement in the film’s opening graphic comes to life, facilitating the manifestation of events, realizations and insights that might not otherwise occur. And, in such a scenario as this, it’s possible that someone like Indimunder could start to identify the answers he’s looking for. The onetime lost lamb suddenly becomes a seeker, one who’s able to discover truths that have previously eluded him.

Once armed with such knowledge, anyone who takes this step must realize how imperative it is to search for our authentic selves, because it’s within them that our most significant answers reside. A thorough understanding of the nature of one’s authentic self can be tremendously revealing, especially when it comes to recognizing and appreciating why our existence unfolds as it does. Without such clarity of thought, it’s easy to contend that our reality is something that emerges at random, out of our control, with consequences that appear as a result of people, forces and things outside of ourselves. However, if we believe in the validity and power of conscious creation, we also come to see how such viewpoints are excuses, rationalizations for being unwilling to accept our role in the manifestation process and the inherent responsibility that accompanies it. Indeed, we might not like what we see, which means we must be painfully forced into accepting that there’s something about ourselves we don’t like as well. However, without such acceptance, circumstances will likely remain as they are – unfulfilling, unalterable and unyieldingly intractable – until we’re willing to do otherwise. That can be a high price to pay for foolhardy stubbornness and unrelenting denial.

Fortunately, breaking through such blockages carries tremendous benefits. It can relieve the persistent pressure we may have been feeling, allowing us to rid ourselves of beliefs that no longer serve us, as well as the unpalatable fallout, dissatisfaction, disappointment and unfulfilling emotions that often accompany them. We can rewrite our thoughts, beliefs and intents to take forms that are more fruitful, providing us with access to opportunities that may have been blocked off from us or that we had been fundamentally unable to fathom. It can transform past hurts into successful healings, as well as enable us to see ourselves – including our authentic selves – in an entirely new light. And there’s no telling what that might help make possible. But, in Indimunder’s case, there’s a good chance that he could be on the verge of finding out. 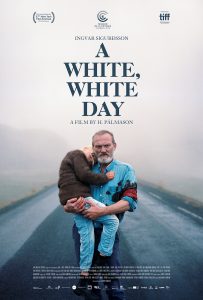 This gorgeously filmed, well-acted Icelandic tale of loss, romance and betrayal presents its story in subtle but novel ways, with ample symbolic references that cleverly reinforce the thrust of the narrative. Director Hylnur Palmason, handily a rising star, inventively tells his tale in intriguing ways, such as effectively letting his cinematography do the talking in place of words, a technique from which other filmmakers could learn a lot. Admittedly, the picture meanders somewhat in the middle, taking a little longer than needed to pin down what it’s trying to say. A little tidying up, slightly quickened pacing and greater emphasis on its core underlying message would have worked wonders to make a good film an even better one.

“A White, White Day” has not gone unrecognized in cinema circles. At the 2019 Cannes Film Festival, the film was named the winner of the Louis Roederer Foundation Rising Star Award, as well as a nominee for the Critics’ Week Grand Prize. It has also picked up a number of honors and nominations at other film festivals. In addition to its screenings on the festival circuit, the film is now available for first-run online streaming.

The prospect of surveying the uncharted territory of our consciousness may intimidate many of us. But, just as exploratory surgery is sometimes necessary to uncover hidden illnesses, the same is true for exposing the inner troubles that remain out of sight and keep us in a distressed state. The longer we put off the process, the more painful it can become over time, often resulting in more anguish than what would come from just taking the plunge to uncover the source of the discomfort. What we find may surprise or even shock us, but what we frequently get from such a discovery is much-needed relief, the kind that allows us to leave the past behind and move forward into a promising new future. Getting the fog to lift may take some effort, but the change that comes from it is all too clear.