Oftentimes we spend considerable portions of our lives hoping that we’ll be the beneficiaries of our most cherished aspirations, especially when it comes to finding the loves of our lives. We hold out hope that the perfect soul mate will walk into our existence and join us in a life of happily ever after. But do we really believe in the possibility of that happening? And, if so, what does it take to realize it? Those are among the questions addressed in the new metaphysical romance, “The Secret: Dare to Dream.”

Miranda Wells (Katie Holmes) is a woman with a lot of challenges. The widowed mother of three has difficulty making ends meet, tries to prop up a house that’s falling apart and faces a variety of pressures on many different fronts. Oh, and now the Louisiana community where she lives is facing the prospect of a hurricane headed her way. What more could happen?

To her credit, though, Miranda has her share of allies in her corner. Her boss, Tucker Middendorf (Jerry O’Connell), owner of the seafood restaurant where she works as a manager, treats her well, both professionally and personally as a potential romantic interest. Her children – Missy (Sarah Hoffmeister), Greg (Aidan Pierce Brennan) and Bess (Chloe Lee) – are sometimes a little demanding but always have their mother’s back. And Miranda’s mother-in-law, Bobby (Celia Weston), never hesitates to help out, even if she can be a bit overbearing at times. But, even with all this assistance, Miranda’s about to receive a new and even bigger source of help, one she never saw coming. 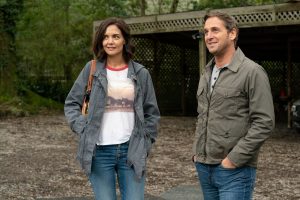 While driving home after work to prepare her house for the approaching storm, Miranda gets into a tiff with Missy over her impending Sweet 16 party, an argument that distracts her and results in a fender bender, the last thing she needs at a time like this. Fortunately, the crash victim is unhurt and proves to be an eminently reasonable soul; as Miranda freely acknowledges her responsibility for the incident, the other driver, Bray Johnson (Josh Lucas), assures her that it’s no big deal, pointing out that her aging minivan bore the brunt of the damage and that his hulking pickup truck was virtually unharmed. In fact, he’s so laid back about things that he offers to repair her vehicle to keep the insurance company from becoming involved. Miranda is stunned by the offer, but, when Bray reveals he’s a Vanderbilt University engineering professor who just happens to be in town on business, she agrees to his generous and thoughtful proposal. It also doesn’t hurt that she quietly finds him cute, a feeling that appears to be mutual.

Bray follows Miranda to her home to work on the repairs when he comes upon a startling realization – she lives at the same place where he had stopped by earlier in the day to conduct the business that brought him to town in the first place. But, since she was not present at the time, her absence kept him from taking care of things. And now that he’s caught up in the repair work, as well as a boatload of questions from Miranda’s ever-inquisitive children, he decides the timing isn’t right to discuss business and holds off on saying anything.

In gratitude for his unexpected help, Miranda invites Bray to stay for dinner, at which point everyone starts to get to know one another better. The discussion turns somewhat philosophical as Miranda details the many challenges she faces, and it’s apparent that she’s a firm believer in Murphy’s Law. By contrast, Bray shares his viewpoint, one that’s based on the idea that “the glass is half full” and that help always seems to arrive just when one needs it. He offers analogies to illustrate his point, but he never pushes his perspective on his host. However, if Miranda has any common sense, she should realize that, based on her own recent experience, he’s right.

With the storm about to make landfall, Bray makes his exit, again without completing his unfinished business. Yet, little does anyone know, this seemingly innocuous and random encounter marks the beginning of a deeper, more involved connection, one that unfolds with a variety of unforeseen implications. And it’s a story that reflects much of what Miranda and Bray discussed over dinner, a scenario with ramifications on an array of fronts.

Upon closer examination of Bray’s prevailing outlook on life, we see that he believes we draw into our lives what we focus on, for better or worse. This is the philosophy behind the law of attraction (a.k.a., conscious creation), which maintains that our lives and existence are shaped by the power of our thoughts, beliefs and intents, with the resulting conditions mirroring whatever input we provide. It’s ultimately what accounts for the positivity that pervades Bray’s life and the challenges that characterize Miranda’s existence. And it’s why Bray’s needs are met whenever they arise and why Miranda’s burden always seems to grow ever larger.

At its heart, the law of attraction is a fairly simple concept, one that faithfully lives up to its core principle. But it should also be noted that it’s not a fixed notion, either; it’s subject to change, depending on whatever thoughts, beliefs and intents we put into it. It would be just as easy for Miranda to attain the same kinds of outcomes as Bray as long as she puts forth beliefs in line with those sought-after results. All she need do is shift her focus.

Admittedly, this may not always be easy, especially if we’re accustomed to thinking, believing and intending along particular lines. It’s unclear how long Miranda has been sending out her disconcerting vibes, though much of her trouble seems to have begun when her husband, Matt (Corey Scott Allen), was killed in a plane crash. The kindly but largely unsuccessful inventor wasn’t always the best provider to begin with, but his death left her saddled with the responsibility for raising her three children alone, as well as the other problems noted earlier. 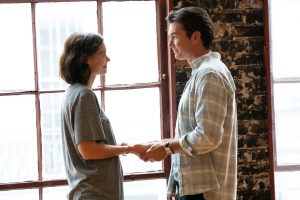 However, as Bray’s observations – and presence – indicate, Miranda’s circumstances indeed need not be set in stone. And, as their interaction grows, further proof of this emerges. Bray brings to the table what Miranda needs, and this prompts realizations that cause her beliefs to shift. Before long, the glass is no longer half empty.

Of course, there’s more to all this than just adjusting our thinking. It’s important to recognize the emergence of clues that indicate we’re getting what we ask for (again, as always, for better or worse). These materialized hints, known as synchronicities, offer manifested evidence of our intents coming to life. These seemingly perfectly tailored “coincidences” often jump out at us with stunning clarity, though sometimes they may be more subtle, taking forms that aren’t readily recognizable at first glance. For example, Miranda’s fender bender might initially appear to be yet another challenge she doesn’t need. However, as events unfold, it proves to be exactly what she needs in a variety of areas. One could say this is the proverbial silver lining in the cloud. At the same time, though, it could also be that Miranda had been so oblivious to the existence of the law of attraction that she needed something significant to “jolt” her into awareness, something that a car accident could achieve quite effectively (and rather metaphorically at that). Some have characterized this as God whispering in our ears, an apt description, to be sure. We just need to make certain that we’re listening.

While much of what happens in “Dare to Dream” deals with the law of attraction at work in a romantic context, it’s by no means limited to this application. It can be employed in attaining whatever we need, for it applies to the creation of the totality of our existence, not just random components. So, even though we may be using it to manifest a particular objective, that doesn’t mean it’s stopped working in other areas that are receiving less of our attention. Those materializations may go on autopilot as we focus the majority of our intents in other directions, but they’re in operation nevertheless, creating a reality based on whatever thoughts, beliefs and intents we have allowed to settle into place as we work our magic in our primary area of attention. 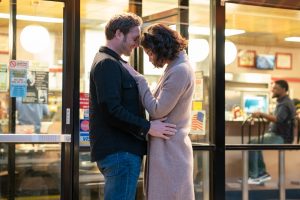 What’s most crucial to remember in all this, though, is that our reality emerges in line with our focus and in highly tailored ways (as the synchronicities illustrate). Because of that, we must continually be aware of the specific thoughts, beliefs and intents we’re putting forth, for the results will reflect them with sparkling fidelity. This means examining those inputs down to the finest of nuances, for they will provide the shading and coloring to the overall manifestations. If we allow undermining influences to creep into our focus, for example, we’re likely to see such elements showing up in the end result. If we hold a vision of a particular outcome but it’s tainted by doubt, for instance, our sought-after result may materialize in a distorted form – or not at all – no matter how convinced we may think we are about the viability of the manifestation of the primary goal. Indeed, this speaks directly to the idea of “Be careful what you wish for.”

When examined from an overarching perspective and applied skillfully, the law of attraction truly can make miracles happen. What’s more, the palette of possibilities is open-ended; it all depends on what we do with it. However, as the film’s title suggests, all we really need do is dare to dream, because, in the end, dreams indeed can come true.

While admittedly schmaltzy, sometimes predictable, cloyingly cheerful and thinly written, this long-simmering love story based on the metaphysical teachings of the wildly successful self-help video and book “The Secret” (2006) is clearly an easy target for cynical critics and skeptics of the material’s basic premises. What’s more, the look and feel of the film often seem like something straight off The Hallmark Channel or Lifetime Television. Nevertheless, this crowd-pleasing take on law of attraction philosophy does a more than capable job of illustrating its rudimentary principles without belaboring the instructional aspect, working its ideas into the narrative seamlessly, subtly and effectively. This is not groundbreaking cinema, but it is by far one of the best fictionalized cinematic adaptations of self-help material for the big screen that I have ever seen. Even if somewhat sappy, it’s refreshing to see an uplifting release come along that offers viewers hope and inspiration during trying times – or any time for that matter. The film is available for first-run online streaming. 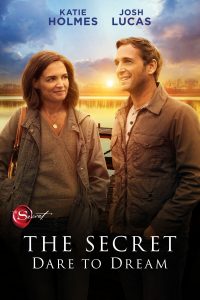 We’re all familiar with the old adage that maintains “Love springs eternal.” And, thanks to the law of attraction, it’s more achievable than most of us realize. However, if we keep the possibility at arm’s-length, we may forever wander the romantic landscape on our own, hoping against hope that something will happen with a mindset that contends otherwise. But, with a change of mind, we can attain a change of fortune, one bound to bring about a change of heart – for real.