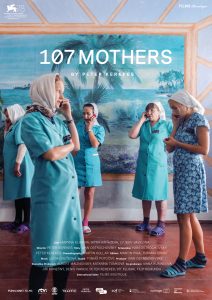 Raising a child as a single parent can be challenging enough in itself, but imagine trying to do so as a mother in prison. The harsh, regimented, bureaucratic conditions of this environment are challenging for all concerned – mothers, children, and even the staff of guards and professional caregivers, some of whom long to be parents but aren’t as “fortunate” as the inmates they oversee. Of course, one also needs to remember that these women are here for a reason, many of whom have been convicted of crimes as heinous as brutally murdering their unfaithful husbands and boyfriends. Such are the circumstances faced by a group of women incarcerated in a Ukrainian detention facility in this fact-based drama about what it’s like to undergo imprisonment while raising young ones. The inmates are forced into having to deal with considerations as daunting as the reality of their sentences, the guilt and psychological impact of their crimes (despite being the perpetrators themselves), and enduring separation from their children, something they could face permanently if they cannot find guardians to care for their little ones once they reach a certain age. Director Péter Kerekes’s third narrative feature is to be commended for taking on such a sensitive subject, its efforts at addressing a myriad array of issues associated with such circumstances and doing so with an often-experimental approach. However, the film attempts to cover so much ground that it occasionally becomes somewhat unfocused (particularly in the first half), leaving viewers to wonder exactly where the picture is headed. To its credit, though, there are also some powerfully moving sequences that drive home the true pain associated with these conditions, situations that can’t help but evoke genuine empathy, even among the least sympathetic of viewers. A noble effort with much potential, even if it isn’t always fully realized.