‘A Crack in the Mountain’ 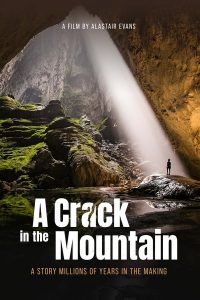 “A Crack in the Mountain”

What happens when environmentalism, tourism and economic development all collide? That’s the dilemma facing the fate of the Hang Son Doong cave in central Vietnam’s Phong Nha-Ke Bang National Park, widely considered to be the world’s largest cavern system. Discovered 31 years ago and not widely explored until 2009, this four-mile-long geological formation with enormous cathedral ceilings, a fast-flowing subterranean river, an internal waterfall and pristine greenery is a UNESCO World Heritage Site and truly a global treasure. This positively gorgeous locale has an almost spiritual quality associated with it, providing visitors with a perfect environment for personal reflection and intense introspection. And, to top it all off, the cave resembles something out of a Hollywood movie a la “Avatar” (2009) or “Kong: Skull Island” (2017), a source of tremendous inspiration for many art directors and production designers in the film industry. But activists are worried whether the site will stay this way now that it’s becoming more widely known. Adventure tourists have been increasingly wanting to flock to the site, even though restrictions currently limit the number of annual visitors allowed. What’s more, investors and local residents eager to capitalize on the area’s economic opportunities have been anxious to see that potential developed. But can it be done so that ecological, business and employment considerations are harmoniously addressed, supporting sustainability and economic growth without sacrificing the environment? Writer-director Alastair Evans’s debut feature does an expert job at exploring that question from all angles, including those likely to be posed by devil’s advocates. It also provides ample discussion of the social, political, economic and historical influences that are figuring into this debate. And it’s beautifully shot and scored, showcasing Son Doong in all its splendid natural magnificence. In fact, if I had any complaint about the film, it would be that I wish it had more of that. However, what’s most important is that this documentary puts the site on the world’s radar and makes a solid case for its preservation in its authentic state, encouraging us to keep it from being overrun and tainted by the impact of hucksters out to milk it purely for financial gain. This geological gem is too important to us to lose it, so we had better protect it while we still can. And, now that the word is out, let’s hope we succeed at that.