‘A Glitch in the Matrix’ 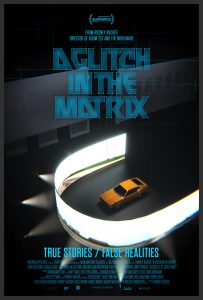 “A Glitch in the Matrix”

Is our reality a genuine phenomenon unto itself, or is it the product of some elaborate computer-generated program? While this is a question that’s fundamentally impossible to answer at this point in time, it nevertheless raises an intriguing possibility under the heading of “simulation theory,” a subject explored to varying degrees of success in this visually captivating and often-mesmerizing documentary. The content of director Rodney Ascher’s big “what if” offering could use better focus in spots (especially in the anecdotal and speculative testimony of its avatar-clad “witnesses”), and the film could definitely stand to place less emphasis on the dark side of its subject matter (particularly in a questionable and overlong recounting of the role it played in a troubling criminal case). However, when it comes to examining such notions as déjà vu, synchronicities and the Mandela effect, as well as the influential writings of such profound thinkers as Plato and author Philip K. Dick, particularly in the roles that they have played in the development of this notion, the film is truly at its best. For the skeptical out there, it may be easy to chalk up this material to stoner nonsense, silly speculation or oh so much intellectual masturbation, so those with such an outlook would be wise to skip this one and mull over their close-minded ideas in seclusion. But, for those who are amenable to opening their minds to potentially revolutionary perspectives on the nature of existence, this is a good primer. The implications, from things as simple as creating better video games to as complex as better understanding the very functioning of reality, are potential startling and exciting. And who would want to miss out on that?