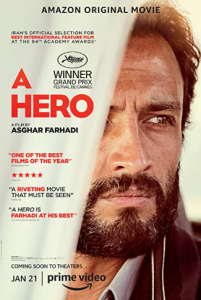 It’s gratifying that there’s a film from Iranian director Asghar Farhadi that I can at last genuinely recommend. The filmmaker’s latest morality play tells the story of an inmate incarcerated for failing to pay a sizeable debt, but, while on a two-day leave from prison, he has an opportunity to make amends when he comes into a stash of lost gold coins. However, can he honorably bring himself to personally benefit from someone else’s apparent misfortune? He subsequently seeks to return the coins to their rightful owner, a scenario that initially earns him tremendous respect and public goodwill but that ultimately validates the notion that no good deed goes unpunished. Or does it? This is easily Farhadi’s best work, a production that engages viewers with its carefully crafted deliberate ambiguity and the heartfelt emotion it generates for a protagonist who can’t seem to catch a break. Even with that, though, the film still bears some of the hallmarks that typically undermine this director’s pictures – a narrative that’s a little too obvious, longwinded ethical discussions that could stand some judicious editing, a script that could be improved with greater subtlety – but, thankfully, those issues are far less pronounced here than in his other works. It’s taken Farhadi some time to at last get things right, but, fortunately, he has done it here. We can only hope that he continues along this path in future productions.