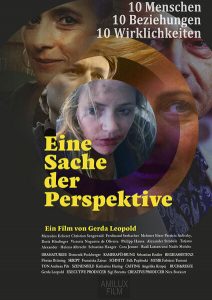 How we perceive the nature of a particular situation ultimately depends on the perspective we each hold about it, even when those outlooks don’t agree with one another. But how can that be if the scenario is fundamentally “the same” for all concerned? That’s where the fallacy of this notion becomes apparent, and director Gerda Leopold’s second feature does a fine job of illustrating this through a collection of interwoven stories (mostly of romantic and relationship matters) involving 10 characters whose paths cross in myriad synchronistic ways. What’s most intriguing about these interactions, however, is how diversely the various participants in these scenarios view their circumstances compared to one another, despite their mutual involvement in them. Ironically, one of the film’s greatest strengths is its reluctance to provide definitive resolution to many of the narrative’s incidents, reinforcing the notion that, given differing perspectives, there often is no set answer that applies to everyone across the board. Admittedly there are some elements of this Austrian production that seem to be somewhat truncated, but that’s a small price to pay for an otherwise-engaging film, one that features a fine ensemble cast and some inventive camera work, with cinematography aptly befitting the picture’s subject matter. A delicious indie gem.