‘A Mother of No Destination’ 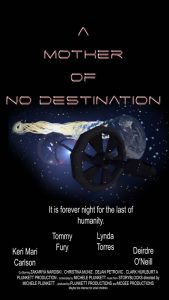 “A Mother of No Destination”

It’s rare that I give a 0 rating to any film, but, if there ever were one that deserved one, this would be it. Writer-director Michele Plunkett’s laughable mess of a movie plays like a high school class filmmaking project put together by a bunch of friends from the drama club. This apocalyptic space tale with themes straight out of films like “Snowpiercer” features some of the worst acting (if it could even be called that) and cheesiest special effects that I have ever seen. Add to that typos in the electronic graphics, amateurish editing, technical glitches aplenty, and unaligned congruency in the dialogue and film frames (a la a badly dubbed foreign film), and you’ve got one atrociously awful film. There’s even a problem with the soundtrack often overpowering the dialogue, making it virtually impossible to hear what the “actors” are saying (probably to drown out their absolutely horrid delivery). I honestly couldn’t tell if this was an attempt at creating a campy cult classic or if it was just that bad, because all efforts aimed at producing an allegedly good “bad” offering simply were too off the mark to qualify on that front. What surprises me most, though, is that the festival even considered presenting this picture in the first place. If this is considered passable, then the bar must be set pretty low to be included in this event.