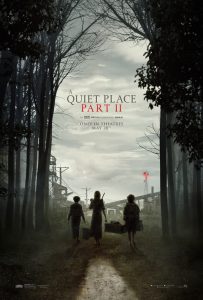 It’s rare that a sequel to a great film compares well with its predecessor, but “A Quiet Place Part II” holds its own admirably when matched up against the original. While some of the scary elements that made the first installment work are repeated somewhat frequently here, they nevertheless still deliver the frights well, something difficult to achieve in horror sequels (especially in smart horror offerings). And, despite some sluggish pacing at the start of the second act, writer-actor-director John Krasinski manages to build and hold the story’s tension remarkably effectively thereafter, particularly in several sequences where multiple plot lines unfold simultaneously. The filmmaker also manages to coax fine performances out of his cast, especially the picture’s younger players, Millicent Simmonds and Noah Jupe. To be sure, the film does have a few plot holes, and the final sequence – though gripping – feels incomplete, obviously setting up the premise for yet another sequel in the franchise. However, on balance, this is a riveting, rollicking summer rollercoaster ride well worth the time – and the spilt popcorn.