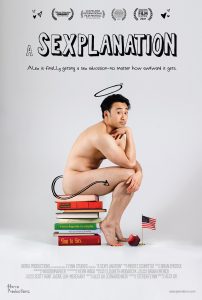 In a culture so pervasively obsessed with sex as ours, it’s amazing that it’s simultaneously so hung up and ignorant about the subject as well. That’s an intriguing paradox filmmaker Alex Liu wanted to explore. So, at age 36, the gay Asian-American director decided to make a documentary about it, one that he hoped would shed some light on this for society at large, not to mention himself, too. As someone who grew up with a shameful outlook about sex, both in terms of his individual orientation and regarding the subject in general, he wanted to get to the bottom of this conundrum, especially in light of his apparently robust libido as an adult. In getting to the root of this matter, he interviews a wide range of experts on sexuality and those who have contributed to shaping our collective views on the subject, including researchers, educators, counselors, scientists and religious figures, as well as family members, friends, and everyday men and women on the street across all ages, ethnicities and sexual preferences. The result is an eye-opening cinematic experience, one that offers significant insights and enlightened solutions for addressing willful bashfulness, all served up in a delightfully whimsical, frequently humorous offering punctuated with clever animation and frank though lighthearted conversations. The filmmaker’s debut feature is a real treat that leaves little to the imagination while pointedly but tactfully informing audiences on so many different fronts.