Skip to content
Home/‘A Shape of Things To Come’

‘A Shape of Things To Come’ 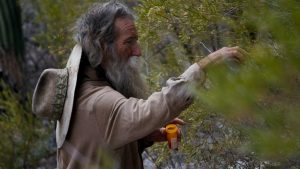 “A Shape of Things To Come”

As a documentary about living off the grid, this might have been a viable picture. However, as it stands now, this minimalist, image-driven feature is so weak when it comes to its narrative that it’s hard to tell exactly what’s going on. Is it a saga of an aging hippie going back to nature to live an eco-friendly lifestyle? A modern-day Western about a radical, free-spirited nonconformist taking on “the system” and its encroaching military-industrial-governmental influences? A post-apocalyptic struggle for survival in the desert wilderness? Elements of each scenario are present, but the film’s deliberate ambiguity grows ever more frustrating as the picture unfolds, as there’s nothing particularly tangible for viewers to grab onto, with its alleged “nuances” amounting to little more than excessive vagary. Directors Lisa Malloy and J.P. Sniadecki were obviously going for something here, but what that is, unfortunately, remains unclear, hidden behind a muddled cinematic façade.