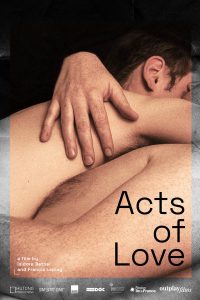 When director Isidore Bethel’s relationship with an older man sours, he takes a break from things and relocates from Mexico City to Chicago to make a film that, from the very beginning of the production, has no apparent sense of direction. It’s a trait more than amply apparent in the finished product, too. And, as revealed in phone conversations during the course of the picture, the filmmaker’s mother absolutely hates it (and astutely so). This meandering stream of consciousness “documentary” consists mostly of director interviews and encounters with people off the street regarding matters of sex, love, intimacy and relationships, backed by musings of cluelessness and ennui, all linked by Mike Mills-styled bridge sequences. In the end, however, the picture essentially ends up being little more than a vehicle for potential hook-ups involving the filmmaker. There’s plenty of masturbation going on here, too, both of the intellectual kind and otherwise. Sadly, this is yet another example of pretentious, unfocused material erroneously being passed off as alleged high art. Thankfully, Mom sees through it all and doesn’t hesitate to call out her self-indulgent son, absolutely nailing it when it comes to assessing exactly what’s going on in this feeble excuse for a film. Indeed, as once again becomes apparent, “Mom truly knows best.”