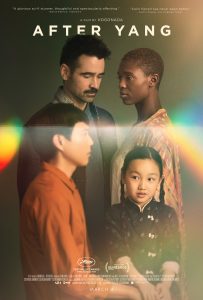 How often does a movie seek to address the big questions of life? Well, if you’re the filmmaker Kogonada, the answer to that question would appear to be “every time.” Like his previous beautiful and ambitious release “Columbus” (2017), the director has followed up with an even more beautiful and ambitious project in “After Yang.” Based on the short story “Saying Goodbye to Yang,” this thoughtful and emotive cinematic meditation follows the efforts of a San Francisco couple of the future in trying to save the family’s malfunctioning trans-sapien teenage “son,” Yang, an AI who was brought into the household to act as a cultural mentor and role model to their young adopted Chinese daughter, Mika. But, as those valiant attempts to save Yang progress, parents Jake and Kyra begin to discover that there is more to their surrogate child than they ever realized, raising intriguing questions about what it means to be human (or even sentient for that matter). Countless recollections bring those considerations to the fore and give both characters and viewers alike pause to examine and reevaluate outlooks that may have once been rigid but can now be looked upon in a more fluid light. With fine performances all around, stupendously gorgeous cinematography (a Kogonada hallmark) and a lovely background score, “After Yang” evokes a profound array of moods, from joyful to sad to reflective, leaving one supremely touched by the experience. There are occasional pacing issues, and a few of the ideas raised are left less than resolved (most likely intentionally), but overall this is a truly stirring experience, one whose impact will linger long after the lights come up.