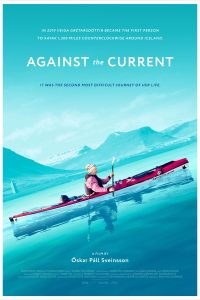 To truly prove ourselves, sometimes we must pursue goals that are seriously over the top, quests that most of us would view as seemingly impossible, possibly even foolhardy. So it was for Icelandic kayaker Veiga Grétarsdóttir when this courageous transgender athlete decided to circumnavigate her island home by traveling counterclockwise, going against the current. When asked why she would undertake such a dangerous and potentially deadly venture, she replied that she had been going against the current all of her life and that this felt like something she needed to do to help raise awareness for the transgender community and organizations that support it. What resulted from this 103-day endeavor, as chronicled in director Óskar Páll Sveinsson’s sensitive and gorgeously filmed documentary, is a journey of self-discovery on multiple fronts – and one not limited to the waters off the coast of Iceland. This offering is an inspiring and uplifting piece of filmmaking, one sure to stir the spirit, tug at the heart and encourage us to fulfill potential we never knew we had.