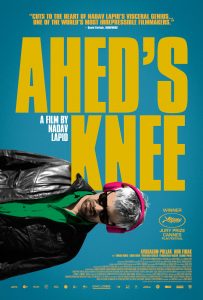 When a perpetually disgruntled, self-absorbed, middle-aged Israeli filmmaker attends a screening of one of his films at a public library in a remote desert locale, he uses the opportunity to protest the government’s increasingly aggressive and intrusive censorship of the arts. He particularly objects to having to fill out paperwork specifying the limited scope of subjects he’ll be able to cover in his post-screening Q&A session, especially since his failure to comply will keep him from getting paid for the presentation. But, as significant as these concerns are, they’re generally not covered in much depth until far into the film, one whose opening half is dominated by a wealth of irrelevant incidental material and pointless music video-style segments, much of it filmed with needlessly jarring camera work and punctuated with shots of landscapes, people and the sky, most of which add nothing to the narrative. When the film finally manages to get on track, it truly becomes intensely engaging (albeit somewhat preachy, though understandably so). However, by then, it’s too late to effectively salvage the project, as viewers are likely to be thoroughly confused and uninterested by this point. What’s more, there are several intriguing but vastly underdeveloped story threads here that, because of this lack of attention, could have just as easily been left out. It’s obvious that this offering’s protagonist is essentially the alter-ego of controversial director Nadav Lapid, making this film more of a personal catharsis than anything else (though that doesn’t mean audiences have to sit through it). It’s also ironic that this production is so unabashedly angry at some of those government-backed entities that bankrolled this very project (talk about biting the hand that feeds you). Indeed, it’s unfortunate that this release never manages to pull things together to tell a cohesive, well-made story, as it appears it genuinely has something of merit to say – that is, if you can find it.