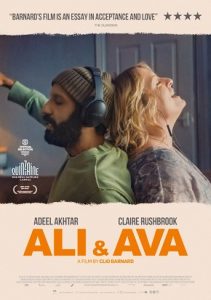 Love stories have been a staple of the movie industry almost as long as there have been movies. But, for such releases to truly stand out, they must offer something of their own to distinguish themselves in this genre. Writer-director Clio Barnard’s latest does its level best to achieve that, but, regrettably, it comes up short. Set in a working class neighborhood of Bradford, West Yorkshire in the north of England, the film follows the choppy, often-meandering relationship of its two title characters, a widowed, middle-aged immigrant Irish Catholic grandmother and a younger British-Pakistani would-be musician who’s separated from his wife. In entering into their passionate but tentative romance, Ali and Ava are each carrying their fair share of baggage (conditions that no doubt contribute to their hesitancy to become deeply involved) while attempting to cope with outside issues related to cultural taboos and less-than-subtle racism. However, despite the picture’s efforts at creating distinctive characters operating under a distinctive set of circumstances, the narrative never comes together as cohesively as it might have, yielding a patchwork of moments of varying degrees of intensity and engagement, a mix that doesn’t quite gel. For every scene that effectively draws in viewers, there are just as many that are shallow, extraneous throw-aways. What’s more, the story lines related to the outside issues aren’t developed nearly as fully as they could have been. To be sure, the film features fine performances by Adeel Akhtar and Claire Rushbrook as the two leads, but, considering the ample critical acclaim that has been lavished on this offering, as well as its two BAFTA Award nominations, “Ali & Ava” nevertheless proves to be something of a disappointment. This attempt at creating a profound love story could have benefitted greatly from some much-needed shoring up in a number of key areas – especially as an offering in a genre that inherently calls for distinction to genuinely stand out.